The Senate’s two leading climate hawks, Sheldon Whitehouse of Rhode Island and Brian Schatz of Hawaii, are pushing a bill that would make the U.S.’s climate policy rational and coherent. The climate-denying Republicans controlling Congress won’t pass it, of course, but it’s important to keep the conversation going.

The American Opportunity Carbon Fee Act would charge polluters for their CO2 emissions and redistribute the revenue to the public. Whitehouse and Schatz introduced the bill last month and plan to reintroduce it in the new Congress next year. What they call a “carbon fee” is essentially a carbon tax. Presumably they’re calling it a fee because of the public’s general aversion to taxes, but fee is actually a more apt name. Just like you pay a set fee for use of certain kinds of public infrastructure, like a toll road, companies should pay a set fee for using the atmosphere to dispose of their carbon pollution.

Nonpartisan experts inside and outside of government overwhelmingly agree that climate pollution imposes costs on the rest of us, through extreme weather, property damage, increased healthcare costs, and more. For 2015, the federal government estimates that emitting a metric ton of CO2 or its equivalent will impose $42 in costs on American society. In wonk speak, this is referred to as the “social cost of carbon.” Many experts think the government’s social-cost-of-carbon estimate errs on the low side. But whatever the true social cost of carbon, none of it is currently being paid by polluters. We’re basically subsidizing climate pollution by letting fossil fuel companies and energy utilities stick us with the tab. 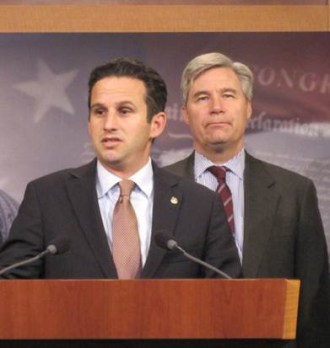 Whitehouse and Schatz want to remedy this, and they propose using the federal cost-of-carbon estimate as a starting point. So under their plan, starting in 2015, major greenhouse gas emitters would pay $42 for each ton they spew, and that would go up 2 percent per year to keep pace with inflation. The fee would be assessed on all coal, oil, and natural gas produced in or imported to the U.S., and would cover large emitters of greenhouse gases from non–fossil fuel sources like landfills, incinerators, and concentrated animal feeding operations (CAFOs).

If companies were paying the social cost of climate pollution, they would have to adjust their operations to produce less of it or pass the cost onto consumers, and ultimately the whole energy economy would shift. So, for example, electric utilities would move toward larger renewable energy portfolios, and investment in renewables would increase dramatically. Americans facing higher costs would reduce their electricity usage. Manufacturers would make appliances like refrigerators more efficient to win customers. A study by the think tank Resources for the Future (RFF) estimated that a carbon fee of just under $40 per metric ton now and rising to around $58 per ton by 2035 could cut annual emissions in half.

OK, I know what you’re wondering: Why does this matter? It’s not like Republicans are going to pass it. Well, it is important for climate hawks to the keep the conversation going about how best to address climate change, even when they are out of power. The most efficient taxes will tend to be the simplest ones, without a bunch of loopholes to protect incumbent industries. So it’s good to hash out this kind of bill in the open rather than making a bunch of compromises with special interests behind closed doors, as happened with the Waxman-Markey cap-and-trade bill in 2009. That’s why last year Rep. Henry Waxman (D-Calif.), cosponsor of that failed bill and a super–climate hawk, called for writing a new bill and making it a carbon tax.

Whitehouse and Schatz surely aren’t expecting their bill to pass in the next Congress, but they designed it with the hope of attracting at least some Republican support, as Whitehouse said in a recent interview with local TV news in Rhode Island. To that end, the bill doesn’t specify what to do with the revenue from the carbon fees, which could be more than $2 trillion over 10 years, it just lists a set of possibilities. They include: rebates to consumers who will face higher electricity bills, retraining of workers in fossil fuel industries, efforts to cut greenhouse gas emissions, projects to help the country adapt to coming climate changes, increased Social Security benefits, decreased personal or corporate income taxes, deficit reduction, student debt relief, and infrastructure investment. (One crucial option that’s missing is foreign aid to developing countries that will be hard hit by climate change. Aside from the moral imperative, assisting poor countries with their transition to a clean energy economy will be necessary to win their support for an ambitious global agreement to reduce emissions.)

Whitehouse is prepared to answer the typical Republican complaints about all CO2 regulation: that it will increase costs for consumers and create a drag on the economy by hobbling electricity-heavy sectors like manufacturing. Rebates and tax cuts, Whitehouse argues, can return the money to low-income Americans so that they don’t end up any worse off, just with an incentive to shift their consumption patterns away from fossil fuel–generated energy. And reducing the corporate tax rate could mitigate the effect on energy-intensive industries.

In a statement emailed to Grist, Whitehouse spokesperson Seth Larson points to conservatives like George W. Bush’s former treasury secretary, Hank Paulson, who support a carbon tax and believe it would be good for growth. (Conservative economists and policy wonks often favor shifting the tax burden from income and investment to consumption.) “Senator Whitehouse agrees with conservative economic experts like Arthur Laffer and Hank Paulson, both of whom have advocated for a carbon fee on economic merits,” says Larson. “As Paulson wrote, ‘A tax on carbon emissions will unleash a wave of innovation to develop technologies, lower the costs of clean energy and create jobs as we and other nations develop new energy products and infrastructure.’”

Of course, the fact that carbon taxes are ideologically compatible with true conservatism doesn’t mean Republicans will support it. There is currently only one Republican in the Senate who supports even the idea of regulating carbon emissions: moderate Susan Collins of Maine.

Most congressional Republicans don’t actually care about efficiency and small-government principles. (Remember Medicare Part D?) They want to protect their patrons in large businesses that already exist, not aid the development of alternative industries like solar energy that don’t yet give them any money. Also, if you claim not to believe in climate change, as almost all Republicans do, you by definition can’t support combating it.

Anyway, the main reason that some conservatives have embraced carbon taxes in recent years — or embraced them in theory, at least — is because Democrats tried to pass a cap-and-trade bill in 2009-2010. As soon as Democrats embrace one market-based mechanism for solving a social problem, such as an individual mandate to buy health insurance, Republicans call it big government. They insist they would work with Democrats if only those partisan lefties would be reasonable and agree to some other, more virtuous market-based policy solution. (There has been some similar behavior on the left: Democrats who were open to partial Social Security privatization in the 1990s turned against it when President George W. Bush actually campaigned for it.) If Schatz and Whitehouse’s bill picks up any steam among Democrats, carbon fees will likely get less support from conservatives.

The bill is not without its design flaws. As Jeff Spross of Think Progress points out, it probably sets the price of carbon too low. The current social-cost-of-carbon calculations, adjusted for inflation, may or may not be high enough in years ahead to reduce emissions as much as the U.S. should if we’re aiming to avoid catastrophic climate change. Just last year, the federal government found it had been underestimating the social cost of carbon and revised its calculation upward. As the RFF study shows, higher carbon prices would bring much steeper carbon reductions. Leading climate scientists like James Hansen support faster-rising carbon fees.

But, between now and the day Democrats take control of Congress and are in a position to pass such a bill, there is plenty of time to work out the details. Climate activists can call for it to be strengthened now, before the real fight begins.