When world leaders gathered in Paris to open negotiations for a pivotal international climate agreement, I was happy to see so many heads of state reaffirm the central role of trees and forest landscape restoration in fighting and adapting to climate change.

As an African woman and the daughter of Nobel laureate Wangari Maathai, founder of the Green Belt Movement, the restoration agenda is very close to me. The movement my mother established has been mobilizing communities for close to 40 years to restore their landscapes by planting trees for food, for fuel, and to bring barren land back to productive life.

Restoration is also Africa’s best chance to protect itself from climate change. Even though the continent as a whole has contributed minimally to the global climate change problem, Africans will be among those most affected.

By mid-century, Africa’s population is expected to nearly double — from 1.1 billion to 2 billion — pushing the demand for already scarce resources of soil and water. Nearly three-quarters of all drylands in Africa — 1 billion hectares (3.86 million square miles) — are affected by desertification, while a quarter of African agricultural land is seriously damaged, costing an average of 3 percent of GDP each year due to the loss of soil and nutrients on farmland. In sub-Saharan Africa, nearly half the population, 47 percent, earns less than $1.25 a day. 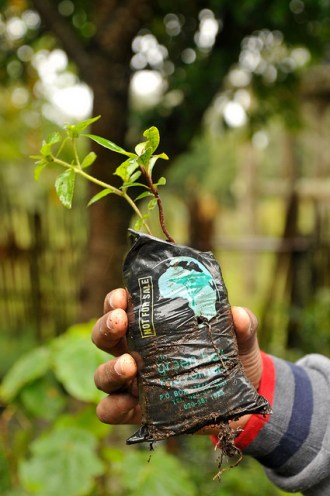 Restoration holds the potential to shield us from those dangers while also providing a wide range of benefits: trees as a source of energy; trees as a source of nutritious food; trees to bind the soil so that agriculture thrives; trees that make our landscapes beautiful. And especially in the developing world, restoring landscapes and planting trees is something we can do right away — we have boots on the ground! By investing in this amazing opportunity, we can tackle a suite of problems with one useful tool.

A new movement called AFR100 — the African Forest Landscape Restoration Initiative — is poised to take advantage of this opportune moment. This new pan-African, country-led effort aims to restore 100 million hectares (386,000 square miles) of degraded and deforested landscapes in Africa by 2030. It’s an ambitious goal, but within reach — at the initiative’s launch in Paris during COP21, African countries committed to restore more than 30 million hectares (116,000 square miles), an area larger than the nation of Gabon or the United Kingdom. And AFR100 partners are earmarking more than $1 billion in development finance and $600 million in private sector investment to support restoration activities.

AFR100 builds on global commitments for landscape restoration, specifically the Bonn Challenge and the New York Declaration on Forests. It is also inspired by programs such as Initiative 20×20, which focuses on landscape restoration in Latin America and the Caribbean. We are proud to contribute so substantially to this global movement, as restoration is both in our own self-interest and benefits the whole world.

I get energized by the landscape restoration movement in its power to address so many issues simultaneously — health, environment, energy security, and empowerment of women — in a way few other interventions can. Restoration can be especially powerful when paired with other solutions like clean cook stoves and lighting, which I also advocate as director of the Women’s Entrepreneurship in Renewables (wPower) Hub at the Wangari Maathai Institute, where we spotlight and support the important role women play in their communities.

The challenges are great, but so are the opportunities. More than 700 million hectares of land are ripe for restoration in Africa, according to analysis by World Resources Institute and International Union for Conservation of Nature (IUCN). These lands are diverse, offering the potential to both restore natural forests and wooded landscapes and also increase the density of trees in highly populated landscapes to help farmers and protect watersheds.

At the opening ceremonies at COP21, many African leaders called for more climate action from the developed world, and that is appropriate. There are a handful of countries we know are responsible for the majority of greenhouse gas emissions, and this is going to cause catastrophic suffering in Africa. We must then call upon the developed countries to play their part in reducing greenhouse gas emissions and finance mitigation and adaptation activities like restoration in other parts of the world.

We didn’t choose this challenge. But we also can’t afford to wait for others to take action. We have a huge responsibility to mitigate and adapt for our own sake and the sake of our children, because a world of extreme climate change is grim for us all. We have to be diligent in our advocacy for climate justice, but at the same time, we cannot be asleep. We have to put the measures in place in our own countries that will protect our people from the climate crisis. Planting or nurturing a tree seedling in African soil is a good place to start.

Wanjira Mathai, daughter of Nobel Peace laureate Wangari Maathai, is the co-chair of the Global Restoration Council and chairperson of the Green Belt Movement.