U.S. pledges more money to help clear the way for a climate deal in Paris 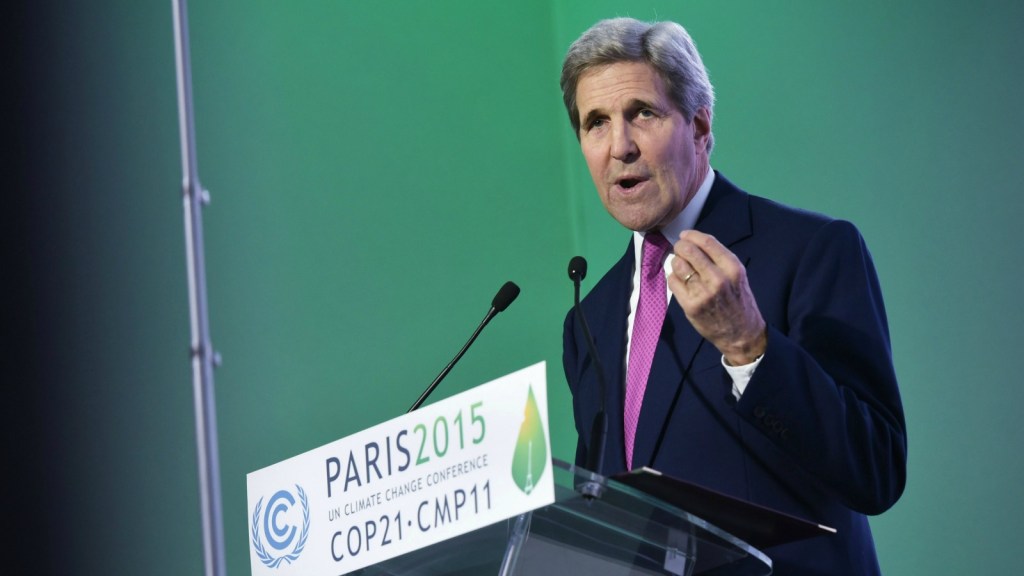 U.S. pledges more money to help clear the way for a climate deal in Paris

The U.S. has promised to double to $861 million aid to countries on the frontlines of climate change in the final push to reach an agreement to avoid dangerous global warming at crucial U.N. talks in Paris.

As the negotiations moved into their critical final phase, the White House said the U.S. would deepen its commitment to help low-lying and poor countries that are already threatened by rising seas and powerful storms.

The additional aid, announced by John Kerry, the secretary of state, came as part of an all-out offensive by the White House and administration officials to seal a deal at Paris.

“We need to get the job done,’’ Kerry said in a hard-hitting speech to the Paris meeting. “This moment demands we do not leave Paris without a durable, ambitious climate agreement.”

As Barack Obama worked the phones from Washington, calling the leaders of India and Brazil, Kerry praised countries moving toward renewable energy, and proffered more aid to countries already living with the impacts of climate change on the ground.

“There are countries we know for which climate change is an existential threat today,” Kerry said. “We have a moral responsibility today to adapt and prepare for those impacts.”

He said the U.S. would double the existing $430 million budget for adaptation by 2020, and that the funds would come in addition to $3 billion the U.S. pledged earlier to the Green Climate Fund, which will focus more on helping countries move to green energy and cut emissions.

Administration officials said the funds would go toward building up weather forecasts and early warning systems to help countries exposed to extreme storms.

It was not immediately clear how the additional funds would be delivered — or how Obama would get around inevitable opposition to the expenditure from Republicans in Congress.

They have tried to block the U.S. from entering an agreement at Paris or providing climate aid to developing countries.

Administration officials said they would not “cannibalize” existing aid budgets, and suggested that Congress would see the sense of spending money to prevent disaster — rather than clearing up after catastrophes.

The aid was an attempt to win over developing countries who say the U.S., Europe, and other rich countries have failed to deliver on promised funds to fight climate change.

The World Resources Institute, a respected environmental think tank, said adding to the pot for climate finance could help reach a deal. “These funds will increase the total pot of climate finance available to support vulnerable countries and shows the U.S. commitment to reach a strong outcome,” it said.

On Tuesday, resentments from developing countries became even more public when Brazil, India, and South Africa said they had no confidence in assertions from the OECD that rich countries were two-thirds of the way to meeting a goal to mobilize $100 billion in climate aid, saying the accounting was murky and unclear.

Those tussles over finance will be increasingly critical as countries pore over the draft text.

“The next 48 hours will be all hard and real negotiations,” Prakash Javadekar, India’s environment minister, told a press conference. But he added: “We will ensure that the world has a good outcome from Paris.”