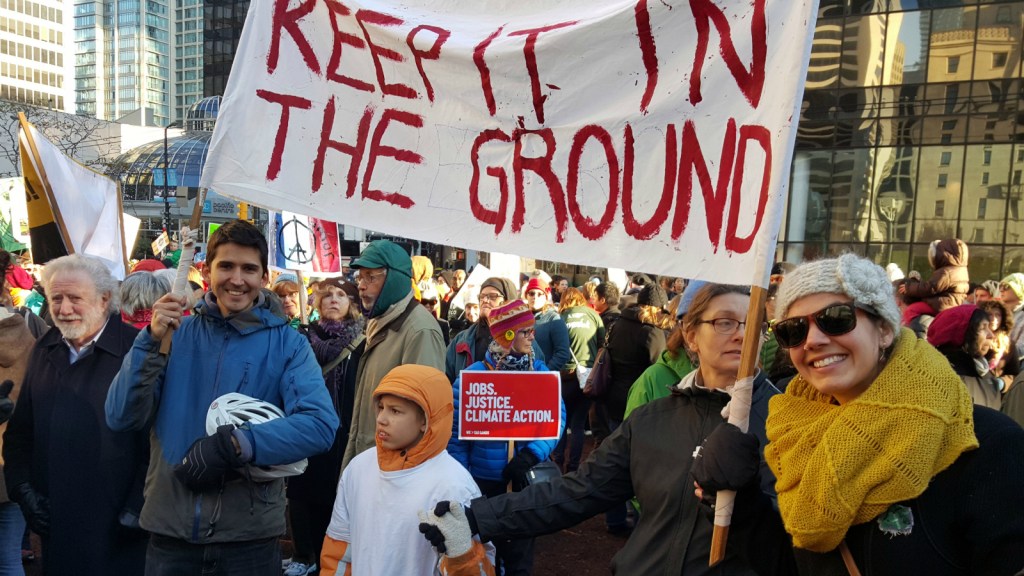 PARIS, France — On Sunday, a handful of kayaks gathered on the Bassin de la Villete canal in northeastern Paris, in front of a footbridge hung with banners. The one in English read, “Defend the Sacred, Protect the Water.” The paddlers were indigenous rights activists from the Americas and Asia. Inside an adjacent boathouse at the subsequent press conference, indigenous leaders in traditional regalia such as beaded sashes and feathered headdresses held forth on the need to “keep it in the ground” when it comes to fossil fuels.

The event, cosponsored by groups such as the Indigenous Environmental Network and Friends of the Earth, aimed to influence the ongoing COP21 climate negotiations happening in Paris. They want the final agreement to protect indigenous rights, in particular the right to be free from fossil fuel extraction on or near their lands.

But while indigenous rights may make it into the agreement in some form, there is little chance of any meaningful measures to keep fossil fuels in the ground being included. And that’s a big missed opportunity.

The closest phrasing that has been in any of the draft agreements rolling out over the course of the negotiations called for rich countries to forgo their own fossil fuel development to allow for the world’s limited remaining carbon budget to be extracted from poorer countries that haven’t enjoyed as much past fossil fuel–driven development. That global carbon budget is quite constrained: 80 percent of known fossil fuel reserves will have to remain unextracted if we are to stay below 2 degrees Celsius of warming, which is the stated target of the forthcoming Paris agreement. But developed countries like the U.S., with big fossil fuel industries and domestic enthusiasm for “all of the above” energy policies, certainly won’t let any language about leaving fossil fuel development to poorer countries into the final agreement.

There was also draft language encouraging countries to stop publicly financing high-carbon energy development, but it would not mandate the end of fossil fuel subsidies. Even setting the abstract goal of decarbonizing the global economy by mid-century meets resistance from oil-rich states like Saudi Arabia.

So the world’s largest, most ambitious climate agreement will not include any provisions to limit the supply of the dirty fossil fuels that are driving global warming.

This is an odd state of affairs if you consider that climate activists, particularly ones from the U.S., have largely shifted their focus from the demand side — calling for capping or taxing carbon pollution — to the supply side — trying to block fossil fuel projects. Of course they still want to cap and tax pollution, but they’ve been having more success working the other side of the ledger. A new generation of energetic young climate activists and indigenous-rights advocates has emerged with “keep it in the ground” as their rallying cry. In the U.S., they have shut down coal plants and stopped new ones from being built. They have blocked coal export terminals on the West Coast and a liquefied natural gas terminal on the East Coast. They killed the Keystone XL pipeline. And similar campaigns are being waged in countries all over the world.

“Paris needs to send a signal that the world is moving away from fossil fuels,” says Jamie Henn, a spokesperson for 350.org. A deal struck in Paris will send that signal from the demand side, via commitments from various countries to use less coal and more energy from renewable sources. But to explicitly target fossil fuel supplies would require a radical restructuring of the whole process. It’s so far outside the bounds of the COP approach that green groups haven’t generally pressed for it, choosing instead to focus on topics directly relevant to the current negotiations such pushing for “loss and damage” support for climate change’s poorest victims and for a strong enough “ratchet mechanism” to raise the bar on emissions cuts in the future.

“The U.N. framework hasn’t caught up yet with ‘keep it in the ground,’” says Michael Brune, executive director of the Sierra Club. “Not everything that is needed to address climate change is even being discussed here.”

The COP framework is all about reducing emissions at the tailpipe or smokestack. It counts all emissions where fossil fuels are burned rather than where they are dug out of the ground, and nations’ action pledges, known as Intended Nationally Determined Contributions (INDCs), only offer to reduce the former. “The U.N. climate talks have been squarely focused on the fossil fuel demand side of the climate problem for the entirety of the convention’s existence, and we’ve seen how far we’ve gotten,” says David Turnbull, campaigns director for Oil Change International. “Limiting demand is vital, but it’s only half of the equation.”

The same dynamic is at play in the U.S., where President Obama is making notable progress in reducing CO2 emissions from automobiles and power plants, but still continues to promote oil and gas drilling and coal mining, even on public land and in public waters, even when it’s a net loss for taxpayers and the U.S. Treasury.

In theory, many of the foreign ministers meeting in Paris right now would be happy to keep burning fossil fuels if it were economically and technically feasible to just suck carbon out of the air and permanently store it somewhere. Saudi Minister of Petroleum and Mineral Resources Ali Al-Naimi plainly stated this unsentimental view at a COP21 forum on Tuesday: “The problem is not with fossil fuels, it is emissions from fossil fuels,” he said. “The research should focus on how we can use fossil fuels without emissions.”

But if you’re concerned about the environmental and social impact of fossil fuel extraction itself or the rights of people who live near oil and coal fields, then that’s no good at all. While most COP21 negotiators are just focused on reducing net carbon emissions, indigenous and environment activists also want to protect local communities and ecosystems. This is a fundamental difference in perspective between the mainstream view inside the negotiating rooms and the broader view of advocates on the outside.

“If it’s all about the demand side, how is it going to help folks in the sacrifice zone of America’s fossil fuel machine?” says Dallas Goldtooth, a campaign organizer from Minnesota with the Indigenous Environmental Network. Goldtooth lives close to both the tar sands in Alberta and the Bakken oil fields in North Dakota. He has seen firsthand the havoc an oil rush wreaks on nearby indigenous communities, from cancer clusters to sexual violence.

Activists also point out the ridiculousness of the U.S. reducing its own coal consumption but then exporting coal to Asian countries such as India that have not pledged to reduce their total emissions.

Still, environmentalists hope that the demand-side pledges countries make in Paris will be used to stop fossil fuel extraction going forward. Countries have committed in their INDCs to emissions cuts that they cannot live up to if they keep extracting fossil fuels at their current rate. “The real test of the Paris agreement when it comes to [climate change] mitigation is whether it leads to the cancellation of fossil fuel projects,” says Henn. “For example, you can go to Canada and Australia and say, ‘Your INDC can’t be met with tar sands [in Alberta] or coal mining in the Galilee Basin,’” a big coal-mining region in northeastern Australia.

The Obama administration does seem to at least see the irony of talking about emission cuts while enabling more fossil fuel extraction. The Interior Department had been intending to hold an auction on Thursday for rights to drill for oil and gas on public land, but on Monday it called it off — for now, at least. It’s been rescheduled for March. The White House apparently heard the message from activists that it’s hypocritical for Obama to pose as a climate leader in Paris at the exact moment that his administration sells off extraction rights to fossil fuel companies.

Conceding to activist pressure like that has begun at the national level, and activists hope it will filter up to the U.N. — if not in this round of negotiations, then in the next. Friends of the Earth had demanded that the U.S. include limits on fossil fuel extraction in its INDC, but the call didn’t get traction. Perhaps in the future there will be a larger campaign around that and it will be heard.

“If this process has legs going forward,” says Henn, “keeping it in the ground has to be the next stage.”