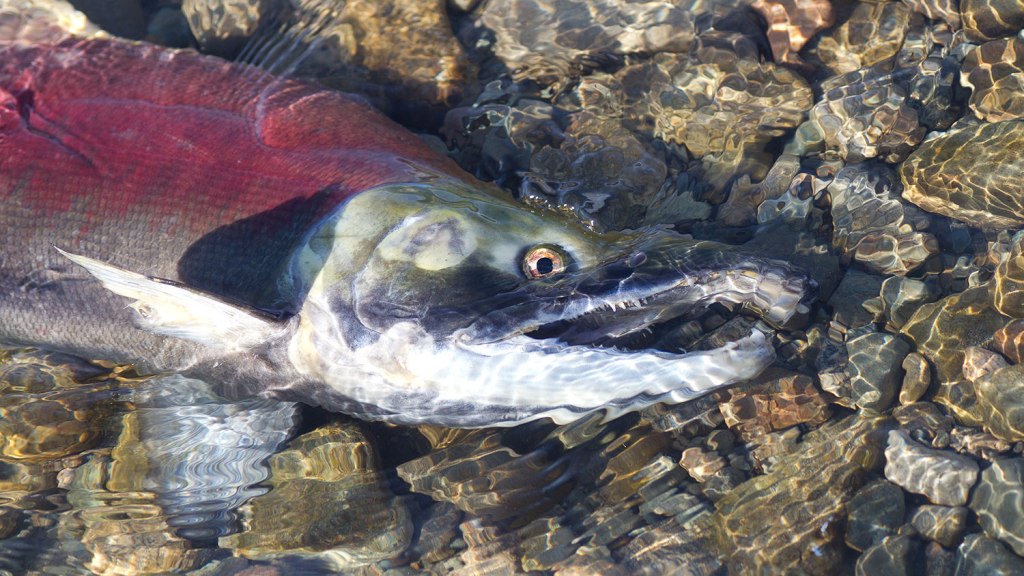 The Columbia River is many things: the fourth largest U.S. river by volume, the river that generates more hydroelectric power than any other in North America, and now, a mass salmon gravesite. Warming river water has killed or will kill more than 250,000 sockeye salmon this spawning season. Welcome to the latest installment of Spoiler Alerts, where climate change deflates all the balloons.

Federal and state fisheries biologists say the warm water is lethal for the cold-water species and is wiping out at least half of this year’s return of 500,000 fish and by the end of the season that death toll could grow to as high as 400,000.

“We had a really big migration of sockeye,” Ritchie Graves of the National Oceanic and Atmospheric Administration told The Associated Press. “The thing that really hurts is we’re going to lose a majority of those fish.”

He said up to 80 percent of the population could ultimately perish.

One of the problems is that record low snowfall in the surrounding mountain ranges has resulted in little runoff that would normally cool the river. The fish, which start to experience stress around 68 degrees F, have been subjected to 70 degree waters since June, with some tributaries reaching 76 degrees. Which means you should wasabi up that Columbia River sashimi while you can — it might be going out of style. In addition to composing a healthy link in the Pacific Northwest ecosystem, Pacific domestic salmon made up about 80 metric tons of food for Americans annually between 2000 and 2004.

Not only are the effects of warming temperatures on the salmon population extreme, climatologists and animal scientists suggest that they’re an expected extreme. Al Jazeera America continues:

The devastation to the local sockeye salmon population is just one of climate change’s effects on wildlife and will “likely” reoccur intermittently over the next decade, James J. Anderson, a University of Washington fisheries scientist whose research focuses on the fish of the Columbia basin, told Al Jazeera.

“The larger problem is that the climate is changing faster than our ability to comprehend the magnitude of the problem,” he said. “Warmer rivers and salmon die-offs can be added to the many events that individually may be random, but which together reveal a rapidly changing world.”

This rapidly changing world has made for a bad month for animals and the climate. The sockeye news follows reports of climate-induced bee deaths and climate change culpability in the extinction of woolly mammoths.

When asked about the salmon deaths, Oregon Department of Fish and Wildlife fisheries manager John North told Reuters, “We’ve never had mortalities at this scale.” When the effects of climate change start sounding like a war zone, we’ve got a problem.