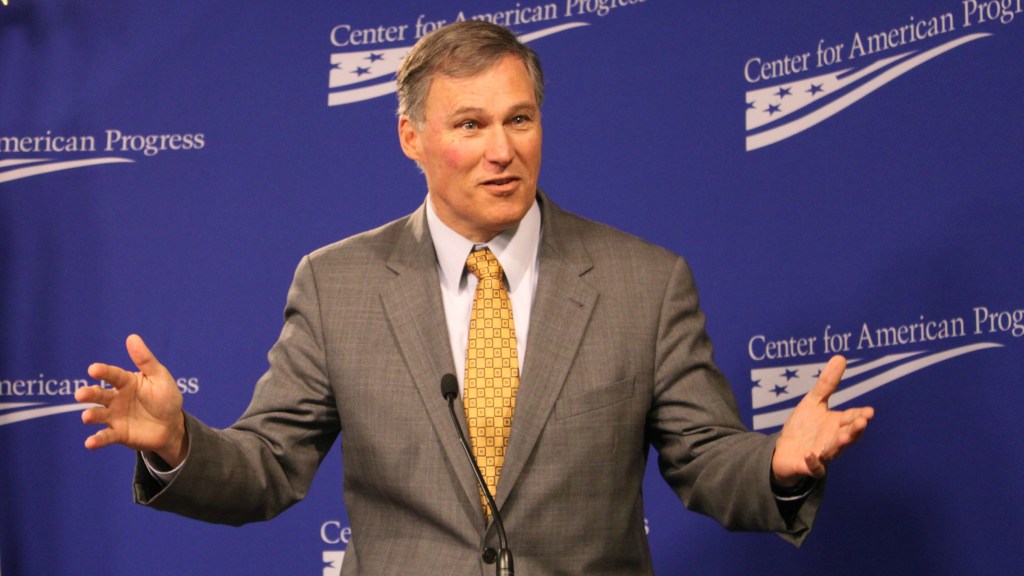 Washington Gov. Jay Inslee (D) really wants his state to do something about climate change, but his legislature hasn’t been cooperative. So now he’s got an ambitious new climate proposal, and he hopes lawmakers on both sides of the aisle will give it a chance.

On Wednesday, Inslee proposed the Carbon Pollution Accountability Act, a cap-and-trade program for the state’s biggest polluters, which he estimates would raise about $1 billion a year. The proceeds would go into the state budget, helping to fund a major transportation initiative and education programs. “We can clean our air and our water at the same time we’re fixing our roads and bridges,” Inslee said at a press conference. “It’s a charge on pollution rather than people.” The governor’s proposal would also help the state meet the requirements of a 2008 law that mandates a 25 percent cut in greenhouse gas emissions by 2035, and further cuts after that.

A policy brief from the governor’s office explains the bill’s basics:

Through this act, Washington will set an annual limit on the total amount of carbon pollution that emitters may release into the air. Major polluters will need to purchase “allowances” for the pollution they emit. Each year, the number of available allowances will decline to ensure emissions are gradually reduced. This provides emitters the time to adjust and make a choice about how to manage their business. They can either invest in cleaner technology and improve their operation efficiency or simply pay for allowances whose cost will grow over time.

The act, according to the governor’s plan, would go into effect in 2016 and would only cover “sources that emit more than 25,000 metric tons of greenhouse gases per year” — of which there are about 130 in Washington state, including a coal-fired power plant, oil refineries, pulp and paper plants, and fuel distributors. Together they account for about 85 percent of the state’s greenhouse gas emissions.

There are other elements to the governor’s new climate plan too. From the Associated Press:

Inslee said he asked state regulators to draft a low-carbon fuel standard similar to California’s first-in-the-nation mandate. Inslee said he wants to hear from lawmakers and others before beginning a formal process on a rule that would require cleaner fuels over time.

Inslee also proposed extending a break on sales tax for the first $60,000 on the cost of an electric vehicle, creating a $60 million fund to support clean-energy research and improving state incentives for solar energy.

Inslee has a long history as an environmentalist and climate hawk. He campaigned for governor in 2012 promising to boost clean energy in Washington. However, after winning the governorship, his green ambitions have been repeatedly foiled by the Republican majority (created by two Democrats who caucus with Republicans) in his state’s Senate. Now, after the 2014 elections, Inslee’s climate battle will be even more uphill: The Republican Senate majority only increased in November, while the Democratic majority in the state’s House of Representatives decreased, despite big money spent in the state by Tom Steyer and other green donors to try to turn the legislature Democratic.

Inslee hopes his new cap-and-trade proposal will draw bipartisan support because of the revenue it will bring in for good causes during a time when the state is facing a budget gap of about $2 billion. And Inslee’s allies in the environmental community (like Steyer, for better or worse) are already on board. Alan Durning, executive director of the Sightline Institute, a Seattle-based sustainability think tank, told The Seattle Times that Inslee’s plan would be “the most comprehensive and probably the most progressive carbon-pollution regulation system anywhere in the world.”

Becky Kelley of the Washington Environmental Council noted that the plan would also be a positive step forward for the Pacific Coast Action Plan on Climate and Energy, a.k.a. the Pacific Coast Collaborative. California, Oregon, Washington, and British Columbia all signed a pact to work together on climate issues in October 2013. Among other economy-greening items, the pact called for the states and province to set a consistent price on carbon; California and British Columbia already have carbon pricing in place, and Inslee has been struggling to catch his state up. The act would be a big step in the right direction.

But many of Inslee’s statehouse adversaries aren’t enthusiastic. “An energy tax is really a tax on mobility and a tax on freedom,” declared Sen. Doug Ericksen (R), who chairs the Senate’s energy committee. Industry groups and conservative think tanks echoed that sentiment. “There’s lots of things we can do going forward. But the big rub going forward is if the governor insists on a big energy tax. That’s going to be a hard one.” Ericksen said he intends to hold hearings on the bill and consider counter-proposals. There will be a fight, and it’s optimistic to hope that the governor’s plan will make it through intact.

But Inslee has that optimism. “Unfortunately, from years past, people have looked at [climate] through ideological lenses,” he said. “Fortunately, that day is past.”