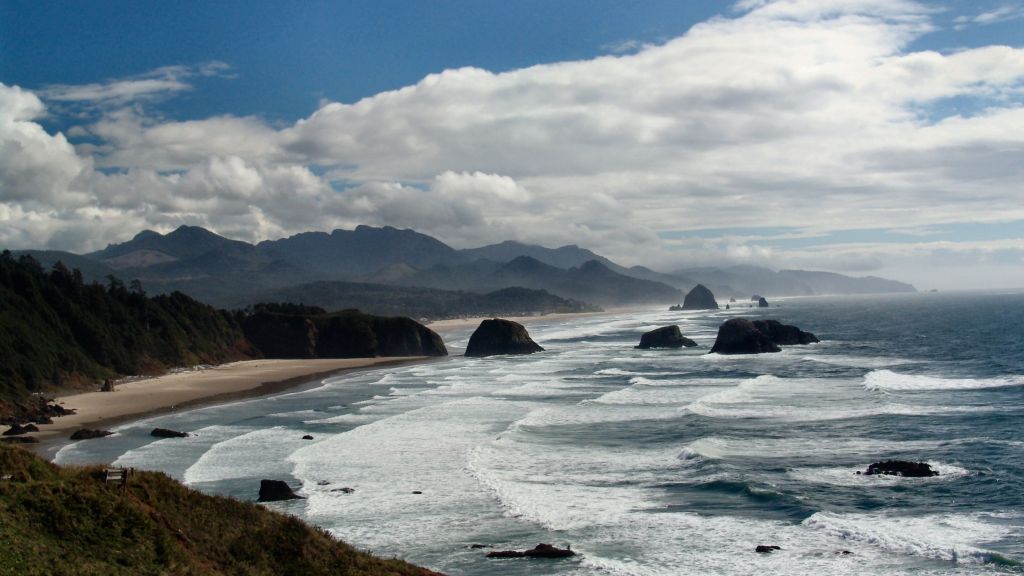 A small Oregon company is set to make big waves in electrical generation by harnessing the power of the ocean. [Editor’s note: If you thought that was bad, batten down the hatches, ’cause there’s rough seas ahead.]

Wave and tidal power generation has had a rocky start on the Oregon coast. Scottish company Aquamarine Power saw its hopes for Oregon wave power sink in 2011. In March, New Jersey-based Ocean Power Technologies abandoned ship. Now it’s up to the local company M3 Wave to keep the hopes for ocean power afloat in the Marijuana State. [Editor’s note: Oregon is not the Marijuana State. Oregon is the Beaver State.] [Author’s note: Beavers, an animal so stoned they will eat trees.]

M3 Wave aims to install its first test unit this summer, according to KUOW:

Mike Morrow, M3 Wave’s CEO, said the initial open water deployment will be a self-contained, 7′ x 30′ rectangle on the seafloor off of Camp Rilea near Astoria.

“It is smaller scale so it is not going to generate a huge amount of power,” he said. “It would be enough to power a small sensor array or marker beacon.”

The demonstration is planned to last two to six weeks starting this August or September. Longer term, Morrow foresees manufacturing larger devices in Oregon. The devices would probably be exported to power off-the-grid outposts or coastal communities with high electricity costs such as Pacific islands or in Alaska.

Ocean power is nothing new. The Rance Tidal Power Station, capable of generating enough electricity to power over 125,000 homes, opened in Brittany, France, in 1966, and has worked swimmingly. Its construction was marred by massive damage to La Rance Estuary, however, which needed to be drained for construction.

Advances in construction and planning have triggered a new wave of tidal power stations, which harness the ebb and flow of the ocean’s tides. Canada’s Annapolis Royal Generating Station has been on line in Nova Scotia since 1984, South Korea is investing heavily in the technology, and the first U.S. tidal station opened two years ago in Maine. Still, attempts in the Northwest have floundered.

Enter M3 Wave. Unlike tidal power stations, M3 plans to harnessing the power of waves. The system uses a series of air filled “acrylic pillows” which will be moored to the bottom out of site. Wave action will compress the pillows, forcing the air from one chamber to another, spinning the turbines and generating electric power. Because the device doesn’t use exposed turbines, it should be safer for marine life than some strategies for generating tidal power, backers say.

Let’s hope so. The turbulent waters of the Oregon coast hold massive potential for tidal power. The Oregon tides are so rough, in fact, the U.S. Coast Guard trains its lifeboat crews in Astoria, the same spot where MP Wave will be deploying its test unit.

Correction: The original version of this story stated that M3 Wave plans to harness the power of the tides. It’s actually the waves.