PARIS, France — Outside the U.N. Climate Conference site on the outskirts of Paris, in a parking lot surrounded by hybrid buses, stands a pair of 33-foot trees one could mistake for an art installation. Their branches, white and gently sloping skyward, have the feel of PVC piping. Each tree has exactly 63 leaves and can produce 2,400 kilowatt-hours of electricity — enough to power an electric car for more than 10,000 miles annually. That’s because each leaf, twirling around a vertical axis, is a miniature wind turbine. These are les arbres à vent: wind trees. 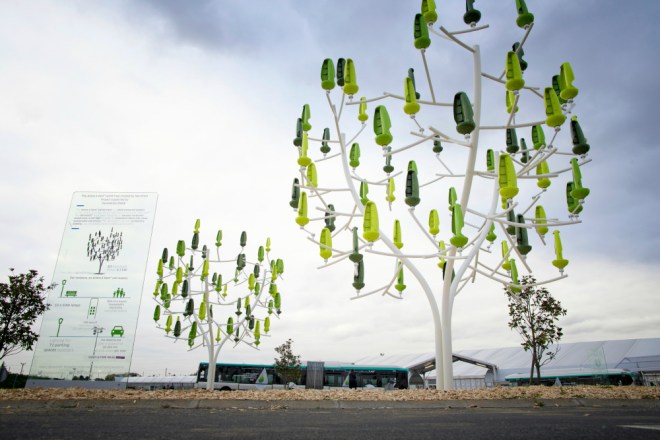 At a climate summit mired in policy debate and finger-pointing, it is easy to forget about the potential of something as simple as a tree. But there are 3 trillion trees in the world, and they are intimately tied to the climate. Alive, they sequester a massive amount of carbon. Chopped down, they release that carbon into the atmosphere. Burned, their contribution to climate change is even worse. Deforestation accounts for at least 11 percent of global greenhouse gas emissions. The Indonesian forest fires that raged this fall emitted more CO2 pollution on some days than the entire United States. In the climate conversation, trees matter. It is fitting that the renewable future envisioned by a vertical wind farm at the conference site has been molded in their likeness.

Smokestacks have tended to get much more attention than trees in the climate conversation, but now, thanks to improved scientific understanding of forest carbon sequestration and better technologies for tracking deforestation, that’s beginning to change. The first days of the Paris Climate Conference have seen more than a dozen announcements by governments and companies related to protecting and regenerating forests, offering a touch of optimism amidst the hand-wringing that dominates the summit. Behind each declaration is, ostensibly, a patch of safe land.

Germany, Norway, and the United Kingdom, for example, pledged a collective $5 billion between 2015 and 2020 to heavily forested countries that can link forest protection efforts to verifiable emissions reductions. Colombia, in conjunction with the aforementioned countries, announced a $300 million deforestation reduction initiative. Norway and Brazil — the latter which had long been a model of what not to do with one’s forests — announced an extension of a partnership through 2020, in which the Scandinavian country will continue to support Brazil’s efforts in curbing deforestation. Brazil has seen a 70 percent drop in Amazonian deforestation over the past decade.

Last year, too, at the Lima Climate Conference, trees received a greater tip of the hat than usual. The Lima-Paris Action Agenda (LPAA) — a joint initiative of Peru and France, along with the office of the U.N. secretary-general and the U.N.’s climate change arm — is a platform for countries, states, private sector players, and NGOs to step up and showcase high-profile climate actions and coalitions in the run-up to Paris. One of the LPAA’s key themes is forests, and its forestry work was celebrated at the climate summit on Tuesday.

“There’s no climate change solution without forests,” said former president of Mexico Felipe Calderón at the LPAA Forest event in Paris. He emphasized that announcements are not enough. “We need to move beyond the speeches and declarations to accelerated implementation; but for that we need to have the right incentives in place.”

The U.N.’s main mechanism for protecting forests — the Reducing Emissions from Deforestation and Forest Degradation program, known as REDD+ — was adopted in 2007 and is likely to be stitched into the Paris agreement over the next week. Think of it as a carbon market for forests. If you’re a country or a company interested in offsetting your emissions, purchase some REDD+ credits and you’ll have secured the protection of CO2-sequestering trees for a period of, say, 20 years. Assuming you can trust the host country to actually protect the forest, it’s a sweet deal for you.

“Face it: That’s why the private sector is at the table,” Charles Barber told me over a cluttered lunch table. Barber is a senior manager at the World Resources Institute’s (WRI) Forests Program. He spends a lot of time thinking about forests.

The private sector also announced several forest initiatives this week that are unrelated to REDD+. Consumer product giant Unilever and British retailer Marks & Spencer launched a public-private partnership aimed at reducing deforestation, in which the companies pledged to restructure supply chains to prioritize buying wood products from countries with strong forestry policies. Other companies are expected to join the pledge. “We have learned that working alone in our own supply chains is not enough,” said Marks & Spencer CEO Marc Bolland at the LPAA Forest event. “We need partnerships to solve the deforestation crisis at a whole landscape level.”

It’s a nice sentiment, and one that was echoed by the 42 major companies of the We Mean Business coalition that pledged this week to completely eliminate commodity-driven deforestation from their supply chains by 2020.

But many forest protection advocates and indigenous activists think REDD+ and other market-focused programs are not the best way to go.

One of the problems with REDD+ is that you can’t always trust host countries to protect their forests. The most densely forested nations are often plagued by illegal logging and rampant corruption.

More fundamentally, most opponents of REDD+ argue that the mechanism is simply a way for rich countries and private companies to offload their responsibilities to poorer entities: Instead of actually reducing their own emissions, they buy their way to a lower carbon footprint by locking up land in a poorer country.

An equitable deforestation-reduction plan would maintain a domestic, indigenous land rights focus, these activists contend. Don’t incentivize deforestation reduction with carbon offsets; just make sure trees are in the hands of communities that care for them.

These criticisms are corroborated by recent evidence demonstrating that stronger indigenous land rights are consistently associated with lower carbon emissions from deforestation. In Brazil, for example, indigenous communities with legal forest rights were associated with a 1 percent rate of deforestation, compared to 7 percent in comparable areas outside such communities — equivalent to a 27-times difference in emissions attributed to deforestation. This week, researchers at Woods Hole Research Center reported that tropical indigenous forest land accounts for about 20 percent of global tropical carbon reserves. But, globally speaking, indigenous peoples lack legal rights to almost three-quarters of their land.

Hindou Oumarou Ibrahim, co-chair of the International Indigenous Peoples’ Forum on Climate Change, turned to her fellow panelists at an LPAA event on Tuesday and said, “To protect your home, you need to help us first.”

The economic case for land rights as a solution to deforestation is often compelling, as well. One recent study, for example, showed that it costs only $1.57 per hectare annually to legally secure indigenous forest tenure, while the corresponding emission-reduction benefits are valued between $38 and $230 per hectare annually.

Such links between deforestation rates and emission rates have traditionally been difficult to make, however. That’s one of the reasons why, on Tuesday, Barber and collaborators at WRI helped launch Global Forest Watch Climate, an interactive mapping initiative that rides on a hefty Google Earth backbone. The software allows users to translate deforestation rates to carbon emission benchmarks as a function of time. One of Barber’s hopes is that the initiative will help clear up the confusion as to who — governments? international bodies? third parties? — is responsible for monitoring and disseminating deforestation emissions data.

“This kind of technology, as it develops, will make that an irrelevant debate,” he said. “There won’t be unofficial and official information. There will only be good information and bad information.”

Good information is unlikely to change the tide in Paris, though. Potential provisions for indigenous land rights in the negotiating text are sparse and tangential, suggesting the likelihood of locking in only a REDD+ mechanism in any agreement. But the distinction between REDD+ and indigenous forest rights might not have to be so stark, argues Barber. He points to an Australian savanna fire-suppression initiative in which the government allows Aboriginal Australians to generate carbon credits by practicing traditional fire management techniques. In turn, they can sell these credits to companies interested in offsetting emissions. It’s a simple wedding of a carbon market, sustainable incomes for indigenous peoples, and the preservation and transfer of indigenous traditions and knowledge.

But whereas fire suppression is a service, secure land tenure is a question of justice. Whether or not the Australian model can be adapted to the deforestation arena remains an open question. Now is the time to find out: Even Brazil saw a 16 percent increase in deforestation rates this past year, a disappointing turnabout after a period of decline.

“On such a vital subject, there is no room for failure,” said Prince Charles at the LPAA event. It is very simple, he argued: “We must save our forests.”