PARIS, France — Amid champagne, chandeliers, green accent lights, and at least one Academy Award winner, U.N. Secretary-General Ban Ki-moon takes to a small podium at the Mona Bismarck American Center in Paris. It is Sunday night, the eve of the Paris Climate Conference, and Ban is here to impart some optimism before the grind of negotiations takes the wind power out of everyone’s sails. “I see all the stars aligning in one direction,” he says. “We share one common goal.”

The occasion of the secretary-general’s speech is the launch of the 1 Heart 1 Tree project, an interactive light installation that uses 3D mapping techniques to project images of trees onto the Eiffel Tower. Designed by Belgian-Tunisian artist and architect Naziha Mestaoui, it allows people from around the world to participate by donating to global reforestation efforts and, in turn, planting digital trees on the tower.

Despite the Eiffel Tower being just across the River Seine from the Mona Bismarck center, guests at the ceremony watch the launch of the project on a pair of LCD screens on either side of the podium. The event has the feeling of an unofficial launch of the Climate Conference. It is heavy with decor and heavier with symbolism. “Hope,” “green,” and “100% renewable” flash over the face of the Eiffel Tower. There are many cameras. A lone cellist with a loop station wrangles together a rather touching Gnarls Barkley cover.

The pomp and circumstance come at the end of a day of boisterous climate demonstrations around the globe and more muted ones in Paris itself. In the wake of the recent terrorist attacks in the city, the French government banned the types of collective protest that were expected to take place on Sunday. Instead, a battalion of crafty thinkers came up with alternative demonstrations for Parisian activists, including a 10,000-person-strong human chain and a display of close to 20,000 pairs of shoes at Place de la République, representing those who had hoped to march. 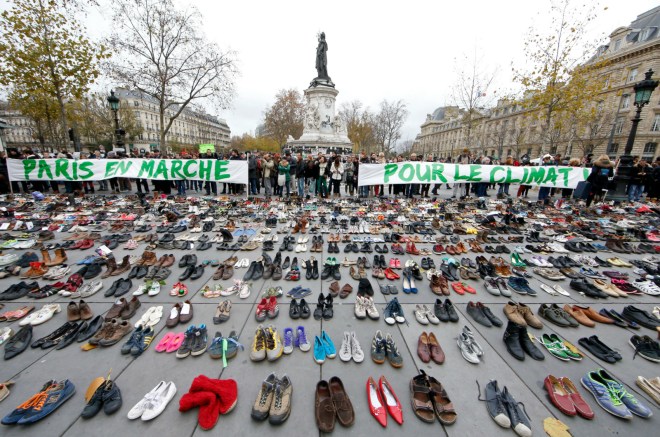 One of those crafty thinkers was Ricken Patel, who heads up the global activist network Avaaz. The shoe idea surfaced in a meeting his team held after the announcement of the bans. For Patel, the placement of the shoes at la République was more than an embodiment of Parisian resilience. “It was an eloquent outpouring of the desire to be heard,” he tells me after the event at the Mona Bismarck center.

There’s a lot of optimism in his voice, and it’s the same optimism that rings through in Ban’s speech. The star metaphor is there, too. “There’s a way in which 100 percent clean energy is that guiding star,” Patel says. “We need a guiding star to show us where we can actually go.”

Patel describes three things a Paris deal must do if it’s to be deemed a success: commit to 100 percent renewable energy, secure $100 billion in annual contributions to developing countries, and develop a rigorous mechanism for ratcheting up the ambition of countries’ climate pledges in future years. Citizen pressure and activism will be needed to achieve such an agreement: “I really feel like what happens this week and next depends on us,” says Patel. “We are not spectators here.”

Ultimately, though, it will be the diplomats in the negotiating chambers who will determine our collective fate.

“Never before has a responsibility so great been in the hands of so few,” says U.N. climate chief Christiana Figueres the next morning at the official opening plenary. There’s a similar line in Prince Charles’ speech a few minutes later: “Rarely in history has the trust of so many been placed in so few,” he says.

It’s time for the few to get to work.