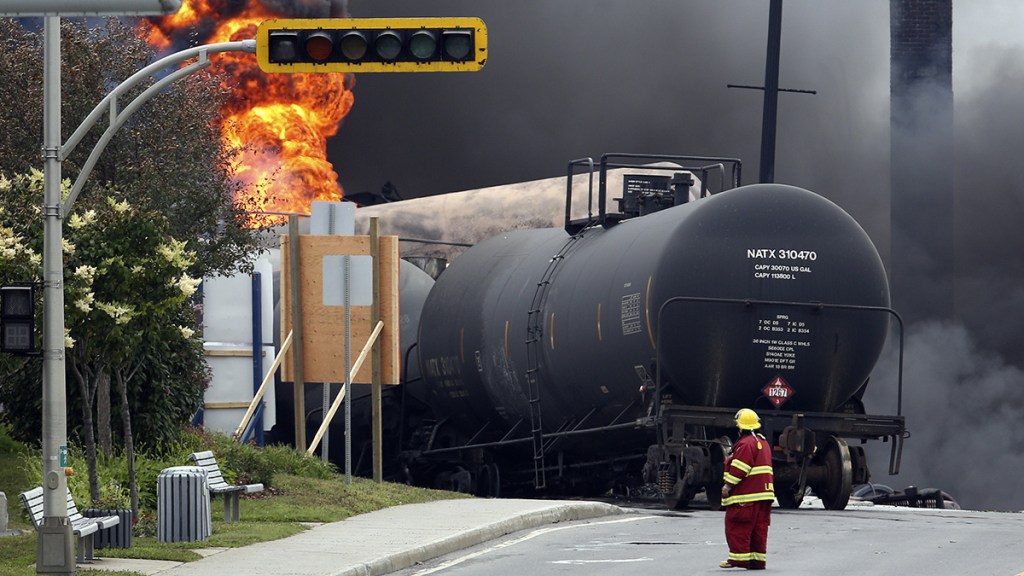 Last weekend, on June 7, it became official: After an emergency order from the federal Department of Transportation, railroads now have to tell state emergency responders when, and where, they happen to be driving trains full of Bakken crude through their region. Is this good news?

It is certainly better than nothing. In the last two years, this newfangled American crude from the Bakken Shale in North Dakota has shown a distressing propensity for exploding when it is loaded on trains and shipped cross-country. This seems to be caused by a variety of factors: old train cars; mystery solvents that are mixed in with the crude in order to keep it liquid and that could be dissolving the train cars; the flammability of the Bakken crude itself.

After a runaway train exploded in Lac Mégantic, Quebec, last year and killed 47 people, and an analysis by the Pipeline and Hazardous Materials Safety Organization showed that seven of the 10 worst oil spills of the decade in the U.S. had happened in the last three years, people began looking, with great interest, into whether trains full of Bakken oil were being routed through their towns.

When they did this they were often stonewalled by railroads, who said that, since the crude was so flammable, its movements through the country were a matter of national security. Railroads sometimes revealed the information, but they did it haphazardly, so that some fire departments knew that Bakken crude was passing through and some didn’t.

The new emergency order hasn’t stopped railroads from trying to keep that information on lockdown. State officials reported that the railroads that are moving Bakken crude  —  Burlington Northern Santa Fe Railway (BNSF), Union Pacific, and CSX — asked them to sign non-disclosure agreements (NDAs) that would bind them to use the info for emergency planning and emergency response activities only, and not to release it under any other circumstances.

It’s unclear how this will play out. Railroads have started releasing the information, since if they don’t they face a $175,000 per day fine and a ban from moving Bakken oil. But a spokesperson for CSX indicated that the flow of information would dry up if the NDAs are not returned, signed, in 30 days.

Which means it’s a stand-off, since many states aren’t going along with the NDA part. “Our state statutes prohibit us from signing,” Lori Getter of Wisconsin Emergency Management told the Associated Press. “It will help the responders to make sure they are fully prepared and trained to respond to a potential incident. But it’s also good to let the community know.”  Washington, Montana, Illinois, North Dakota, Idaho, and Virginia have also declined. Oregon, Colorado, South Dakota, New York, and Iowa report that they are reviewing the agreements.

Louisiana, New Jersey, and California are more ambiguous cases — agreeing to keep the information secret, but perhaps not signing the document itself. Brad Alexander, spokesperson for California’s Office of Emergency Services, described it this way: “As a public entity, we can’t sign a non-disclosure agreement,” he said. “But we want to let BNSF know that we will be treating this information with great respect and keeping it in accordance with federal and California laws.”

Meanwhile, the state of California, which expects to see shipments of Bakken crude through the state rise from 1 percent of total oil imports to 25 percent, has already begun to talk about raising its emergency budget and making disaster plans for inland oil spills.