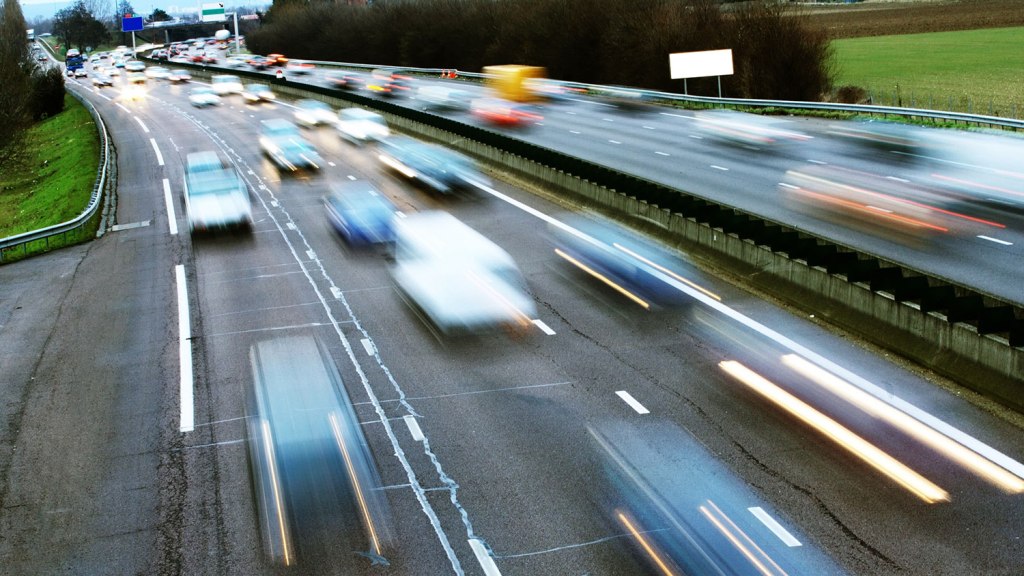 The U.S. is struggling to fix its crumbling transportation infrastructure. National highway and public transit spending is supported by the federal gasoline tax, which now stands at 18.4 cents per gallon. It hasn’t been raised to keep pace with inflation since 1993. States have their own gas taxes, which fund state highways. Like federal gas taxes, these are not set up to automatically increase with inflation, and so they perpetually fall behind. As Governing magazine noted in November, “Twenty-four states haven’t touched their gas tax rates in more than a decade, according to left-leaning Institute on Taxation and Economic Policy. For 16 of those states, the last change was more than 20 years ago.” In addition to the declining real value of gas taxes, Americans are driving less and are driving more efficient cars, meaning they consume less gas per capita. All that together means we’re generating less gas-tax revenue even as our infrastructure needs increase.

One potential solution that some American policymakers have been talking about for years is a vehicle-miles-traveled (VMT) tax. Instead of taxing drivers for each gallon of gas they buy, you tax them for each mile they drive. The idea is catching on. As of March, 13 state legislatures had considered a VMT tax. States such as Washington and California have created commissions to study the possibility and submit proposals on how to implement it. Up in Montreal, Québec, the business community is pushing a version of it (based on kilometers rather than miles, of course). The furthest along is Oregon, which is planning to launch an experiment with a VMT tax on July 1. The small pilot program will have 5,000 volunteers pay 1.5 cents per mile they drive in lieu of  paying the state’s 30-cents-per-gallon gas tax.

Oregon has been a green leader, so you might assume this is a green idea. It’s not. Raising the gas tax is a much better way to fund roads.

As I wrote in 2009 when Transportation Secretary Ray LaHood floated the idea of a VMT tax:

If you are concerned about global warming you should be encouraging people to switch to more efficient cars, and one way to do so is by taxing gasoline. It is pollution, not traveling per se, that we should tax. Moving goods and services is not a bad thing, especially during a recession. Pollution, on the other hand, always is a bad thing.

A VMT tax may sound fair on the surface — make every driver pay — but that’s only if you focus on the wrong byproducts of driving. Sure, building and maintaining roads takes money, and even electric cars that emit no tailpipe pollution put demands on the road system. A VMT tax makes all users pay equally for their usage if you define usage in the narrow sense of miles traveled. But drivers of gas guzzlers are using, and abusing, public goods such as roads and air far more than drivers of efficient cars are. Bigger, heavier cars take up more road space, damage roads more, and cause more harm to other drivers in accidents. And road repair is a minor cost and inconvenience compared to the effects of catastrophic climate change. It’s even pretty small potatoes just compared to the health impacts of particulate pollution from standard gasoline cars. Drivers of electric cars, hybrids, and efficient standard cars deserve a reward — and drivers of SUVs deserve to pay more because they’re polluting more.

What’s far more important than a funding stream to spend on roads is a funding mechanism to discourage emissions of CO2 and conventional pollution. With a gas tax, you get both. A higher gas tax is the best policy lever that exists to increase average fuel efficiency. As Brad Plumer reported in The Washington Post in 2013, “A new paper from researchers at MIT’s Global Change program finds that higher gas taxes are ‘at least six to fourteen times’ more cost-effective than stricter fuel-economy standards at reducing gasoline consumption.” A gas tax enables us to align transportation policy with our climate goals.

Some people view the fact that electric cars escape taxation under a gas tax as an unfair free ride. Maybe so, in a narrow sense, but that’s a lesser evil than taxing an eco-conscious driver of a tiny Smart car the same amount as someone driving a Hummer. And a tax system could be designed so a higher gas tax doesn’t hurt lower-income people who, say, need pickup trucks for work; it could provide them tax rebates. A higher gas tax would then mostly hurt the rich people puttering around in SUVs just because they like having more legroom.

In 2013, shortly after Oregon’s then-Gov. John Kitzhaber (D) signed the law creating a VMT tax pilot program, Jim Whitty, the Oregon Department of Transportation’s manager of “alternative funding” programs, gave an interview to Planetizen about it. As Whitty explained it, the VMT was actually the (ironic) byproduct of Oregon leaders’ desire to pursue climate solutions: As Planetizen’s Irvin David writes, “Whitty [said] that it was not the need for increased transportation revenue but the state’s adoption of policies to promote electric and hybrid vehicles that prompted the legislature to act. In other words, if the state is going to incentivize programs that result in reduced transportation (gas tax) revenue, they have to consider the financial consequences of those policies.” This sounds like a solution in search of a problem. In fact, Whitty acknowledged to Streetsblog that Oregon didn’t face a funding shortfall but preemptively adopted this policy as alternative-fuel vehicles started to become more widespread.

Oregon doesn’t need to take this route. Unfortunately, it will still be many years before there are so many electric and hybrid vehicles that funding transportation through gas taxes creates an untenable shortfall. For now, you could simply raise the gas tax and set it to keep increasing gradually every year — say, inflation plus 1 percent — to stay ahead of the curve.

Hopefully one day we will have no conventional cars on the road and will need a new source of transportation funding. But that day is far off, and when it comes we could use revenue from a carbon tax on dirty power sources.

We should all get used to the idea that roads, bridges, sidewalks, and subway tracks are public goods. That means supporting them from collectively paid taxes and letting people use them for free is not a bad idea but a good one. (Making mass transit ridership free should be the higher priority. Until then, using road fees like tolls is a fine equivalent to charging for bus fare.) Public library users and public school students are getting free rides too. But an educated populace benefits our whole society and economy, and so does a mobile one. Discouraging the movement of people and goods through a VMT tax is probably not a good idea for economic growth.

If you have a particularly traffic-clogged center city, then discouraging driving may actually facilitate movement. That’s the theory behind London’s congestion fee, and proposals to introduce congestion pricing to New York City. But if you don’t actually want to get drivers off the roads, you just want to collect revenue and cut pollution, then you should tax fuel consumption instead of driving.

A VMT tax has one main effect on citizens’ behavior: It discourages them from driving. A gasoline tax has two: It discourages driving and it encourages people to drive more fuel-efficient cars, or cars that don’t rely on gasoline at all. Why not go with the tax that gives you more bang for your buck?