Will the GOP try to block a climate deal just like they did with an Iran deal? 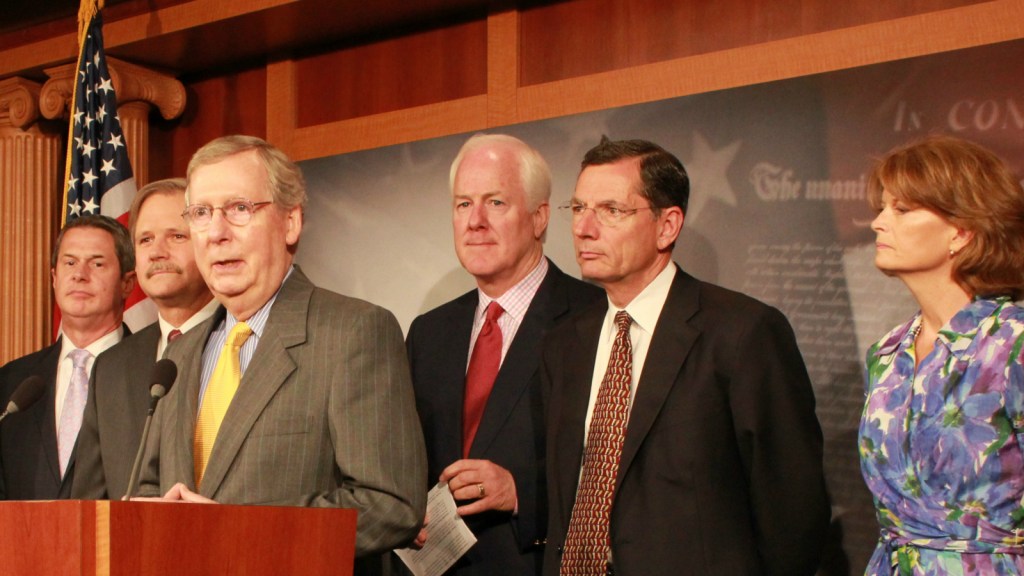 Will the GOP try to block a climate deal just like they did with an Iran deal?

If you remember your 10th grade American history, then you know that foreign diplomacy is conducted by the executive branch. But this week, we saw 47 Republican senators try to undermine that presidential authority by sending a letter to Iranian leaders to discourage their nuclear negotiations with the U.S. That highlights the very real possibility that Republican senators, most of whom don’t believe humans are “significantly responsible” for climate change, could try something similar to block efforts to negotiate a global climate agreement.

Once the barrier of attempting to conspire with foreign leaders against your own president has been breached, why stop?

In December, world leaders will gather at a U.N. conference in Paris to hammer out a new international climate deal. Senate Republicans are already a major impediment to getting an optimal climate agreement. They won’t approve a formally binding treaty, so the Obama administration has steered the U.N. process toward a nonbinding agreement that won’t require an OK from the Senate. And in January, Republicans tried to undermine even the prospect of an agreement through an amendment that would have prevented the Obama administration from making a future deal imposing “disparate greenhouse gas commitments” for the U.S. and other countries. That would effectively prevent any global climate deal at all. The amendment failed, but it’s expected to crop up again.

The GOP also stands in the way of Obama fulfilling his $3 billion pledge to the U.N. Green Climate Fund, which helps developing countries with clean energy development and climate adaptation. Poor countries are understandably reluctant to commit to limiting their emissions when rich countries have already used up the world’s carbon budget, so one way to lure them into a global deal is with funding. But the U.S. cannot contribute its fair share of that money as long as Republicans are in control of the congressional purse strings.

So would Senate Republicans send a letter to Indian Prime Minister Narendra Modi saying that he shouldn’t trust U.S. commitments to kick in to the Green Climate Fund? Would they send a letter to the European Union, China, or Japan warning that they would be unwise to cut their own emissions because as soon as a Republican retakes the White House we’ll start pumping CO2 into the atmosphere as fast as our coal plants can spew it? And, given how apoplectic Republicans were over Obama’s historic agreement with China last year to limit emissions, will they try to undermine future bilateral climate and energy negotiations?

The good news for climate hawks is that Republicans may have learned their lesson — not on the principle of separation of powers, but on the politics. Senate Republican aides are whining that this stunt did not redound to their party’s benefit. The letter’s childish tone, its errors on matters of fact, and its failure to adhere to diplomatic norms have exposed the GOP as unserious about governance. To the Iranians, the letter has made the U.S. seem weak and divided within. Sen. John McCain (R-Ariz.), who signed the letter,acknowledged, “I think we probably should have had more discussion about it, given the blowback that there is.” Newspaper editorials from across the country have bashed home state senators who signed the letter, and Democratic operatives are promising that campaign ads will feature this blunder next year.

Most importantly, the Republicans have failed at their purpose, as Ayatollah Khamenei says Iran will continue negotiating with the U.S. The Republicans foolishly assumed that Iranian leaders were not aware of how the U.S. government works, perhaps because so many of them are ignorant of other countries. Their letter began with this obnoxiously pedantic sentence: “It has come to our attention while observing your nuclear negotiations with our government that you may not fully understand our constitutional system.” But the governments of other countries follow American politics closely. The foreign diplomats who will gather in Paris in December, just like the ones in Iran, will have already taken stock of the American political situation and factored it into their calculations.

So if Republicans learn from this mistake, they won’t try to undercut Obama on climate negotiations later this year. But no one has ever gone broke betting that Republicans won’t learn from the past.