Big Oil's Plan B is already in the pipeline: More plastic 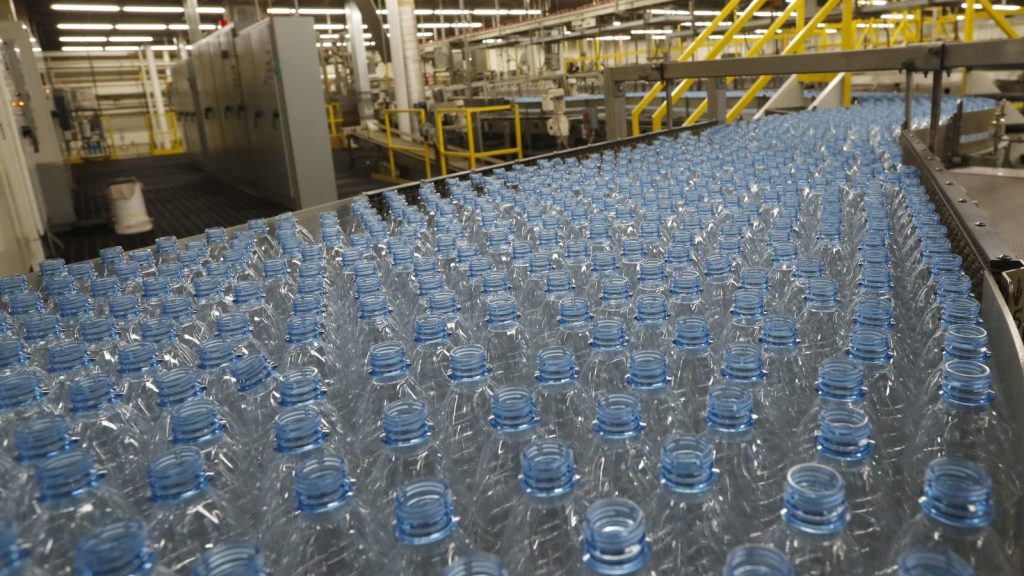 Big Oil’s Plan B is already in the pipeline: More plastic

As public concern about plastic pollution rises, consumers are reaching for canvas bags, metal straws, and reusable water bottles. But while individuals fret over images of oceanic garbage gyres, the fossil fuel and petrochemical industries are pouring billions of dollars into new plants intended to make millions more tons of plastic than they now pump out.

Companies like ExxonMobil, Shell, and Saudi Aramco are ramping up output of plastic — which is made from oil and gas, and their byproducts — to hedge against the possibility that a serious global response to climate change might reduce demand for their fuels, analysts say. Petrochemicals, the category that includes plastic, now account for 14 percent of oil use, and are expected to drive half of oil demand growth between now and 2050, the International Energy Agency says. The World Economic Forum predicts plastic production will double in the next 20 years.

“In the context of a world trying to shift off of fossil fuels as an energy source, this is where [oil and gas companies] see the growth,” said Steven Feit, a staff attorney at the Center for International Environmental Law, an advocacy group.

And because the American fracking boom is unearthing, along with natural gas, large amounts of the plastic feedstock ethane, the United States is a big growth area for plastic production. With natural gas prices low, many fracking operations are losing money, so producers have been eager to find a use for the ethane they get as a byproduct of drilling.

“They’re looking for a way to monetize it,” Feit said. “You can think of plastic as a kind of subsidy for fracking.”

America’s petrochemical hub has historically been the Gulf Coast of Texas and Louisiana, with a stretch along the lower Mississippi River dubbed “Cancer Alley” because of the impact of toxic emissions. Producers are expanding their footprint there with a slew of new projects, and proposals for more. They are also seeking to create a new plastics corridor in Ohio, Pennsylvania, and West Virginia, where fracking wells are rich in ethane.

Shell is building a $6 billion ethane cracking plant — a facility that turns ethane into ethylene, a building block for many kinds of plastic — in Monaca, Pennsylvania, 25 miles northwest of Pittsburgh. It is expected to produce up to 1.6 million tons of plastic annually after it opens in the early 2020s. It’s just the highest profile piece of what the industry hails as a “renaissance in U.S. plastics manufacturing,” whose output goes not only into packaging and single-use items such as cutlery, bottles, and bags, but also longer-lasting uses like construction materials and parts for cars and airplanes.

Since 2010, companies have invested more than $200 billion in 333 plastic and other chemical projects in the U.S., including expansions of existing facilities, new plants, and associated infrastructure such as pipelines, says the American Chemistry Council, an industry body. While some are already running or under construction, other projects await regulators’ approval.

“That’s why 2020 is so crucial. There are a lot of these facilities that are in the permitting process. We’re pretty close to it all being too late,” said Judith Enck, founder of Beyond Plastics and a former regional director for the U.S. Environmental Protection Agency. “If even a quarter of these ethane cracking facilities are built, it’s locking us into a plastic future that is going to be hard to recover from.”

The impact goes beyond the waste problem that is the focus of public concern. Although plastic is often seen as a separate issue from climate change, both its production and its afterlife are in fact major sources of greenhouse gas emissions.

Global emissions linked to plastic — now just under 900 million tons of carbon dioxide-equivalent annually — could by 2030 reach 1.3 billion tons, as much as almost 300 coal-fired power plants, the Center for International Environmental Law found. If output grows as planned, plastic would use up between 10 and 13 percent of the carbon emissions allowable if warming is to stay below 1.5 degrees Celsius, the Center reported.

Those emissions come from nearly every stage of plastic’s life. First, there is the energy-intensive nature of oil and gas extraction. Then, ethane cracking requires enormous amounts of power, with a concomitantly large greenhouse gas footprint. The Shell plant has a permit allowing it to emit as much carbon dioxide annually as 480,000 cars.

An estimated 12 percent of all plastic is incinerated, releasing more greenhouse gases, as well as dangerous toxins, including dioxins and heavy metals. Industry is promoting an expansion of incineration in waste-to-electricity plants, which it describes as a source of renewable energy. What’s more, new research suggests plastic in the environment releases greenhouse gases as it degrades — a potentially vast and uncontrollable source of emissions.

The industry argues that plastic delivers many benefits, including environmental ones. It makes cars lighter and therefore more efficient, insulates homes, reduces waste by extending food’s life, and keeps medical supplies sanitary, among many other uses, said Keith Christman, managing director of plastic markets at the American Chemistry Council.

“These things are going to continue to be important applications that protect our health and society going forward,” he said. “The key here is context. If you aren’t going to use plastics, what are you going to use instead?” Alternatives like steel, glass, and aluminum have negative impacts of their own, including carbon footprints that can be greater than plastic’s, he said. And while critics focus on disposable items that seem frivolous, much plastic is put to longer lasting use, he said.

Still, convenience — like consumers’ taste for eating and drinking on the go — is a big driver of plastic use in wealthy nations. And the developing world has become an important new market, too. In parts of Asia, international companies sell single portions of products such as shampoo, soap, and lotion to low-income consumers in individual packets. But while industry points to a lack of waste management infrastructure in poor countries as a cause of the ocean plastic problem, Americans use dozens of times more plastic per capita than Indians, five times more than Indonesians, and nearly three times as much as Chinese.

In addition to its climate impacts, petrochemical production can release airborne toxins such as 1,3-Butadiene, benzene, and toluene, causing cancer and other illnesses. Many plants are in poor areas, often communities of color, although as the fracking connection drives expansion into rural areas, poor white communities will likely be increasingly affected, too.

Fires and explosions are another problem. The day before Thanksgiving, a blaze at the Texas Petroleum Chemical plant in Port Neches set off two explosions, forcing 50,000 people to evacuate their homes. A week later, authorities issued another evacuation warning after air monitors detected high levels of carcinogenic 1,3-Butadiene.

It was the state’s fourth major petrochemical fire of 2019. “This is the nature of where we live, and the unfortunate side effect of all this production,” said Yvette Arellano, of Texas Environmental Justice Advocacy Services. “I think the general public has a misunderstanding of the full breadth of plastic impacts, especially regarding human health.”

Still, many welcome the jobs petrochemical facilities bring, particularly in areas hit by the loss of coal and other industry. Pennsylvania granted the Shell plant a tax break valued at $1.6 billion — one of the biggest in state history — and officials in Ohio and West Virginia are wooing firms eager to build more ethane crackers, storage facilities, and pipelines. IHS Markit, a data and analysis company, said the region could produce enough ethane to supply four more cracking plants like Shell’s.

One concern for the industry is the spread of laws aimed at reducing plastic’s proliferation. The European Union is banning single-use plastic items including cutlery, plates, straws, cups, and food containers starting in 2021. Eight U.S. states and a number of cities have outlawed plastic shopping bags, and so have 34 African countries.

“Despite those efforts, the demand for plastic is continuing to grow very rapidly” in both developing nations and richer ones, said Peter Levi, a lead author of the IEA’s 2018 report on petrochemicals’ future. Analysts predict annual demand growth of 4 percent. “The capacity additions are not there for no reason,” Levi said.

Annual production has already doubled since 2000, growth driven in part by plastic’s low cost and versatility. “It’s a bit of a dream material,” Levi said.“If you think about how much you can put in a plastic bag relative to how much it weighs, it’s remarkable. That means the substitutes for it have to compete at that level.”

In the case of plastic, though, demand doesn’t always come directly from consumers, but from companies in the food, beverage, consumer products, and other sectors who use it to package their goods.

The American Chemistry Council aims for all plastic to be recycled or recovered by 2040, although critics dismiss the goal as unrealistic greenwash. The E.U., in addition to its ban on single-use items, will also require that plastic bottles contain 25 percent recycled content by 2025.

An IHS Markit report said recycling’s technical capabilities, logistics, and economics were inadequate to such ambitions. Plastic recycling is technically difficult, and China’s closing of its doors to foreign plastic waste in 2018 laid bare the inadequacy of global recycling systems, leaving many wealthy nations with mountains of waste.

Recycled material is unlikely to contribute more than 10 to 12 percent of future plastic production, said Robin Waters, IHS Markit’s director of plastics analysis and one of the report’s authors. And the kinds of items covered by bans like Europe’s only account for about 5 percent of plastic demand, he said.

The industry’s critics fear the expansion of supply is likely to guarantee additional plastic usage regardless of whether consumers want it. Once new ethane cracking plants are built, producers will want to keep them running to maximize revenue, Feit said.

“So then the next concern is that there will be an innovation in ways to get plastic on the market,” he said. “This is what we’ve seen [in the past] — more and more things come packaged in more and more plastic. There is a whack-a-mole issue.” Unless production slows, he added, “they’ll just find something else to wrap in plastic.”