Doomsday Clock moves closer to midnight, due in part to climate change 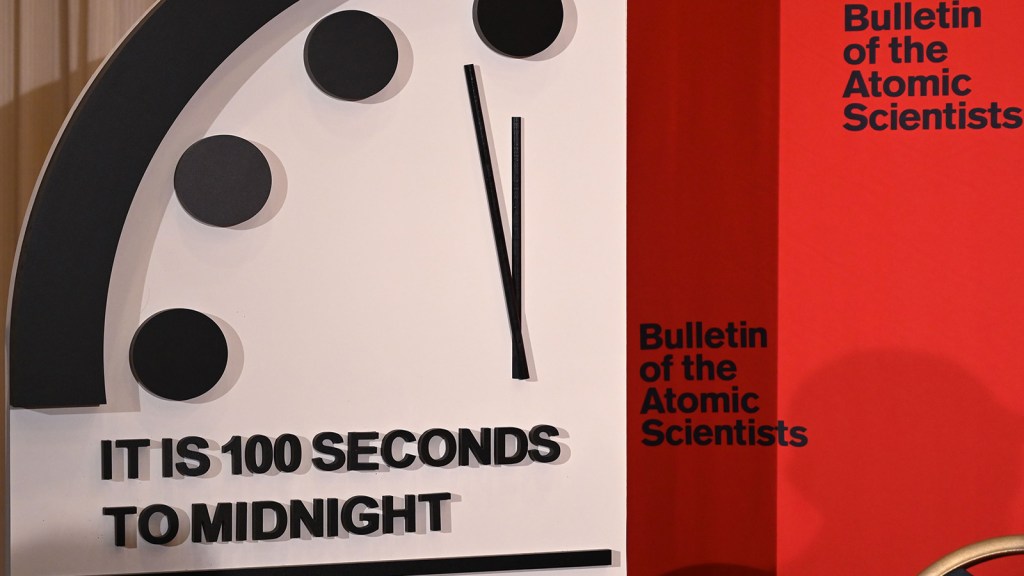 Doomsday Clock moves closer to midnight, due in part to climate change

Humanity is now the closest it has ever been to total annihilation. That might sound like something a character in an Avengers movie would say, but it’s actually a statement made by a group of 19 scientific experts and backed by 13 Nobel laureates. The Doomsday Clock, a symbol created in 1947 to represent humankind’s proximity to global catastrophe, is now just 100 seconds to midnight for the first time ever.

The Bulletin of the Atomic Scientists, the group that manages the metaphorical clock, said the dual threats of nuclear war and climate change, compounded by the threat of “cyber-enabled information warfare” — which undermines society’s capacity to address these threats — has forced the globe mere seconds from midnight. “We now face a true emergency — an absolutely unacceptable state of world affairs that has eliminated any margin for error or further delay,” Atomic Scientists president and CEO Rachel Bronson said in a statement.

The experts at the Bulletin of the Atomic Scientists did not make this deliberation alone. For the first time, the group’s scientists were joined by members of The Elders, a network of global leaders assembled by Nelson Mandela in 2007. The hands of the Doomsday Clock have inched forward in three of the last four years thanks to a combination of nuclear proliferation, climate change, and civil unrest around the globe.

There are ways to keep midnight at bay, scientists say. The U.S. and Russia could come back to the arms control negotiating table and reduce the risk of a nuclear arms race. The signatories of the Iran Deal could come together to limit nuclear development in the Middle East. The world’s nations could commit in earnest to the goals laid out in the Paris Agreement. Perhaps most important for long-term stability, the Bulletin says the international community should work to penalize the misuse of science, a trend that is on the rise thanks in part to the efforts of the Trump administration.