It begins on a sailboat. A girl, dressed all in black, sits astern, motionless. Beside her, the boat’s tiller swings wildly from side to side, and behind her, ocean swells rise far above her head. “I feel that everything I’ve experienced over these last few months is like being in a dream,” she says. “Or in a movie.”

It’s a fitting opening for I Am Greta, the new documentary — airing now on Hulu — about climate activist Greta Thunberg. In August of 2018, the Swedish filmmaker Nathan Grossman heard about a 15-year-old girl staging a strange and quiet protest against climate change in Stockholm. He packed up his gear and went to see. “I thought it would be a three-week shoot,” Grossman later told the Hollywood Reporter. “A story of a few minutes in a short, arty film about child activists.”

The world knows what happened next. Within a few weeks of setting up camp outside the Swedish Parliament, Thunberg — a diminutive, soft-spoken teenager with two long braids — had become a media sensation. Within months, she had met the United Nations Secretary-General at the world’s largest climate conference; by the end of 2019, she had been nominated for the Nobel Peace Prize and named Time Magazine’s “Person of the Year.” Grossman’s documentary didn’t turn into a “short, arty film.” It became the chronicle of an incredible, meteoric rise. 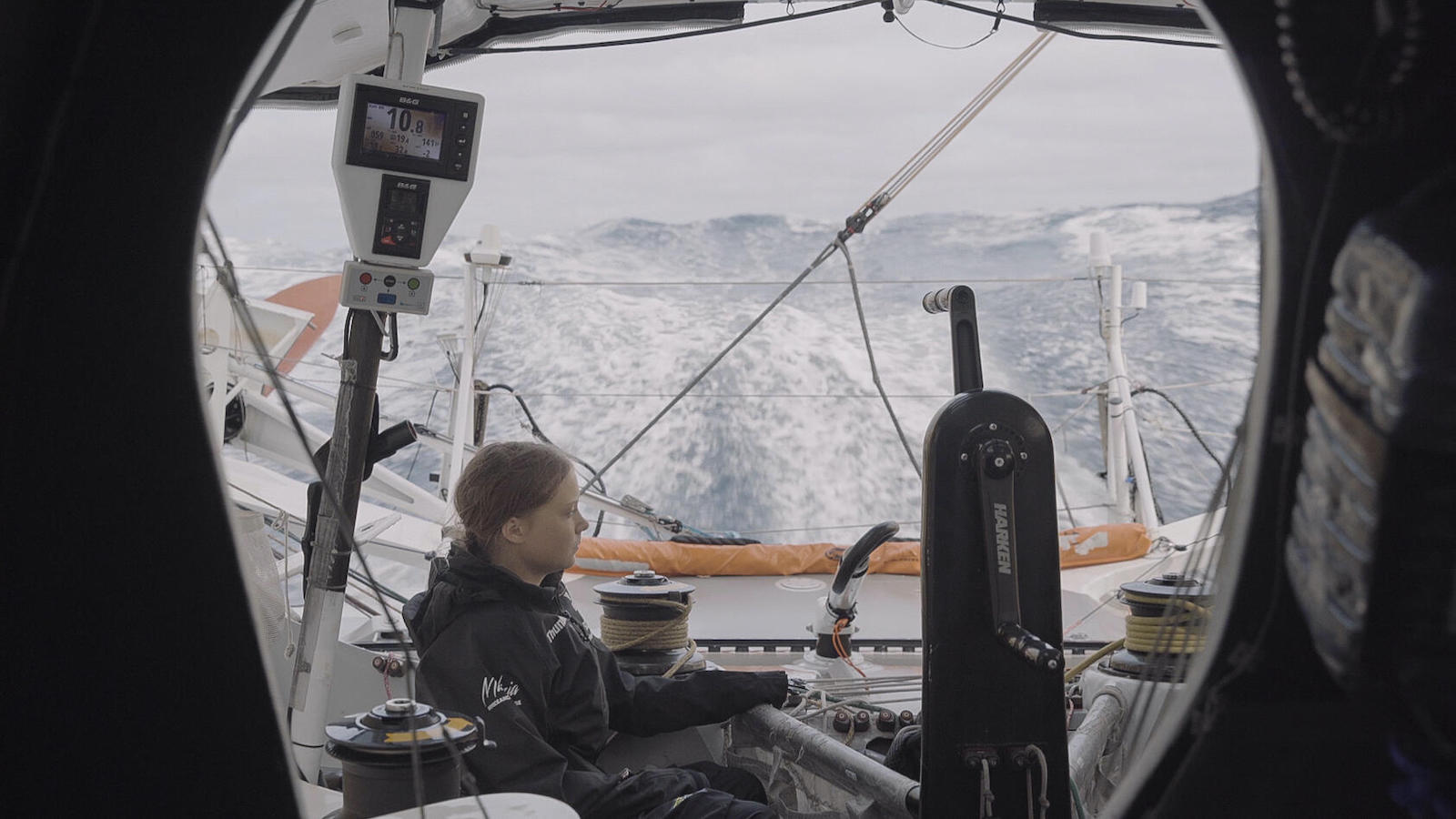 Greta Thunberg aboard the Malizia II, the racing yacht that carried her across the Atlantic for the United Nations Climate Action Summit. Courtesy of Hulu

Thunberg’s celebrity status says as much about the state of the world today as it does about the Swede herself, a shy teen with Asperger’s syndrome. Climate change has long lacked symbols that are more relatable than rapidly melting glaciers or the ubiquitous polar bear. With her level-eyed stare and steady, flat voice, Thunberg replaces those tired icons: her thin, slightly slouching frame serving as a stand-in for future generations. In contrast to the presidents and prime ministers that obfuscate the science of climate change, she is a quiet truth-teller — with words that bite. “Our leaders are behaving like children,” she says, in one common refrain. “We will have to take the responsibility they should have taken long ago.”

Today, watching I Am Greta feels like staring through a strange kaleidoscope into the past, before Thunberg had become the voice — and the face — of the climate movement. In one scene, from the earliest days of her protest, she sits alone against the pink stone wall of the parliament building, her now-iconic “Skolstrejk För Klimatet” (school strike for the climate) sign leaning beside her. “Why are you on strike?” an older woman asks her, disapprovingly. “You should be in school.” Other passersby look at Thunberg, who is wearing leopard-print leggings and simple blue tennis shoes, with barely concealed scorn. (Over a year later, photographed in front of a crashing wave for the cover of Time, Thunberg wore those same shoes, along with a faded, overlarge pink sweatshirt.)

But the doubters don’t have much time to doubt. After a visit to the United Nations climate conference in Poland, Thunberg finds herself on a whirlwind tour of Europe by train, speaking to parliaments, to crowds of fellow activists, and to jostling, camera-holding members of the media. At the Élysée Palace in Paris, where Thunberg is set to meet with President Emmanuel Macron, a dark-suited aide tries to make conversation: “Have you already met other presidents? Other prime ministers?” “No,” Thunberg responds, with the faintest of smiles.

Listening to Thunberg speak, it is easy to forget that she is still technically a child herself — and here, Grossman takes great pains to correct any misconceptions. The film is shot at Thunberg’s eye level, somewhere around 4 feet, 11 inches. From that vantage point, the international negotiations and jam-packed protests feel claustrophobic. In one scene from a climate march in Brussels, volunteers and police form a protective barrier around Thunberg to prevent her from being mobbed; overwhelmed, Greta falls silent and refuses to eat lunch with the other activists.

For a teenager without a history of neurological difference, that refusal might go unnoticed — but for Thunberg, who, prior to her striking days, fell into a deep depression and refused to eat for months — it is a red flag. Her father, Svante Thunberg, pulls her into a nearby building and they fall into anxious, whispered negotiations in Swedish: “You have to eat, Greta!” he pleads. Finally, she accepts a banana and eats it slowly, her face blank. 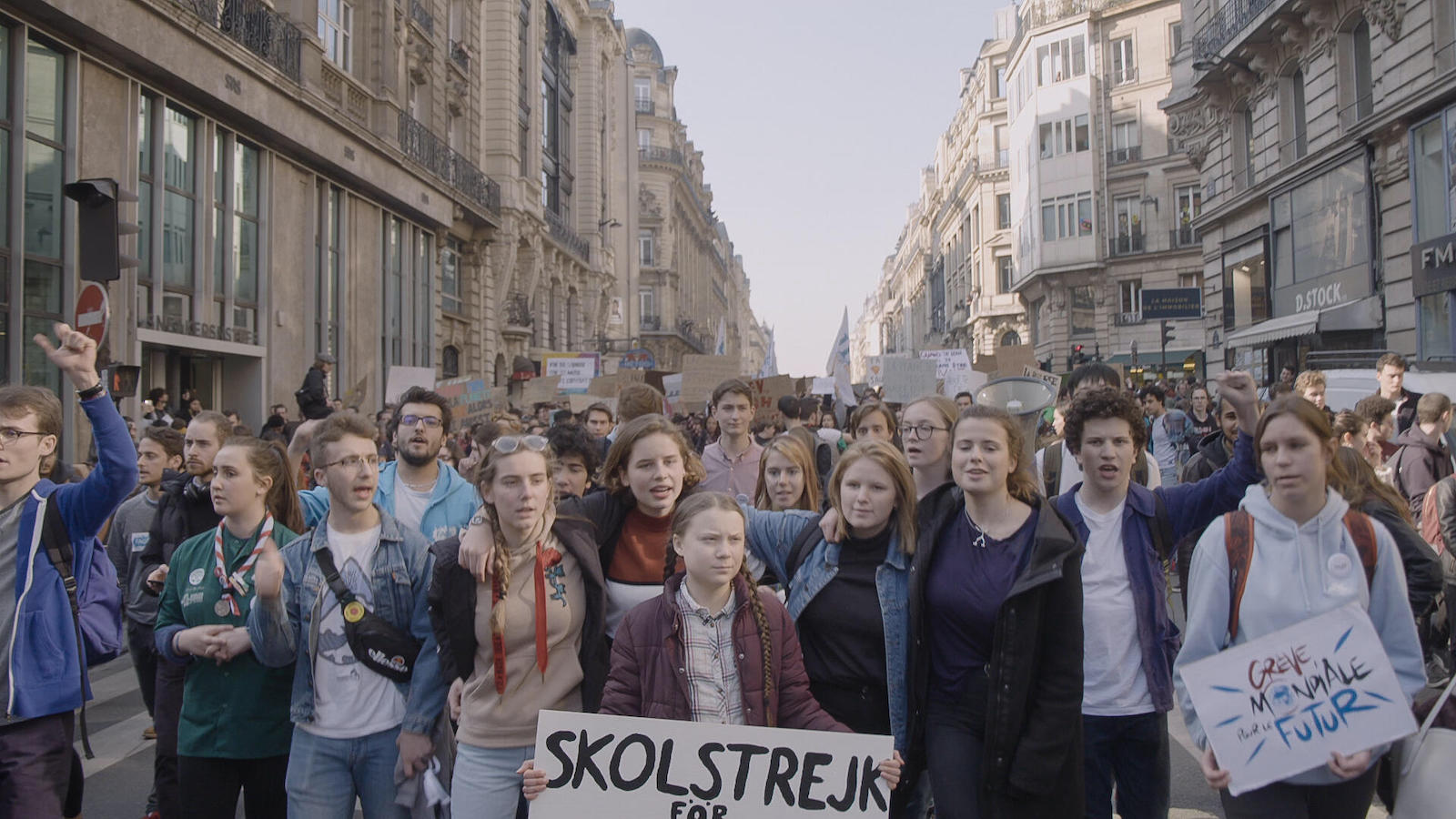 There are other cracks in the teenager’s normally steely resolve. Almost a year to the day from her first strike, Thunberg sets sail for a climate conference in New York City to avoid the gigantic carbon cost of a transatlantic flight. The conditions aboard the 60-foot racing yacht, however, are anything but luxurious. Greta and her father use a bucket to go to the bathroom. Wild waves surge onto the deck. Unable to write because of seasickness, Thunberg dictates journal entries into her phone: “I miss home,” she says, her eyes red with tears. “I miss my regular life, with routines.” She pauses as water slaps the windows behind her. “I don’t want to have to do this. It’s too much for me.”

Thunberg has faced biting criticism unusual for any celebrity, but particularly unusual for a 17-year-old girl. Jair Bolsonaro, the president of Brazil, has called her a “brat”; Vladimir Putin has dismissed her as uninformed; and President Trump has repeatedly mocked her on Twitter and at rallies. The simplistic nature of her message — she returns, over and over again, to the importance of “listening to the science” — also opens her to some critiques. She refuses to endorse particular solutions to the climate crisis (beyond “natural” ones) and is hesitant to identify policies sufficient to meet the scale of the crisis. In a recent interview with the New York Times, she said that while President-elect Joe Biden’s climate plan and the protests for a Green New Deal are steps in the right direction, they are “far from being enough.” “We can’t spread false hope,” she added.

That may be because, time and time again, Thunberg has been disappointed by the slow movements of the political system. In I Am Greta, politicians and diplomats are often shown consulting their phones while she is speaking, or staring off into space. In one poignant clip, she gives a passionate speech to the European Parliament — only to be followed, moments later, by delegates discussing the synchronization of toilet flushes. Her frustration, which builds throughout the film, mirrors that of anyone who worries about the climate crisis and yet feels powerless to stop it. How to make sense of a world in which the most powerful people are negotiating over the plumbing?

The path to a cooler planet may actually rely on the plumbing — not toilets, per se, but on the many nitty-gritty political details that can help shift the planet away from fossil fuels. But Thunberg’s refusal to engage with those subtleties doesn’t make her a bad activist, or a bad role model. Her role is to maintain a steely moral clarity about a single issue: to remind the world’s governments, over and over again, why they still have to do more. And more.

Global warming has long seemed amorphous, far away, and complicated. Guided by a sense of right and wrong, Thunberg made it simple. And that clarity has made her one of the most famous activists in a generation. “Sometimes I feel that it might be good if everyone has a tiny bit of Asperger’s,” she says, back in Stockholm for the film’s final scene. “At least about the climate.”