No more 'war on coronavirus': In search of better ways to talk about a pandemic 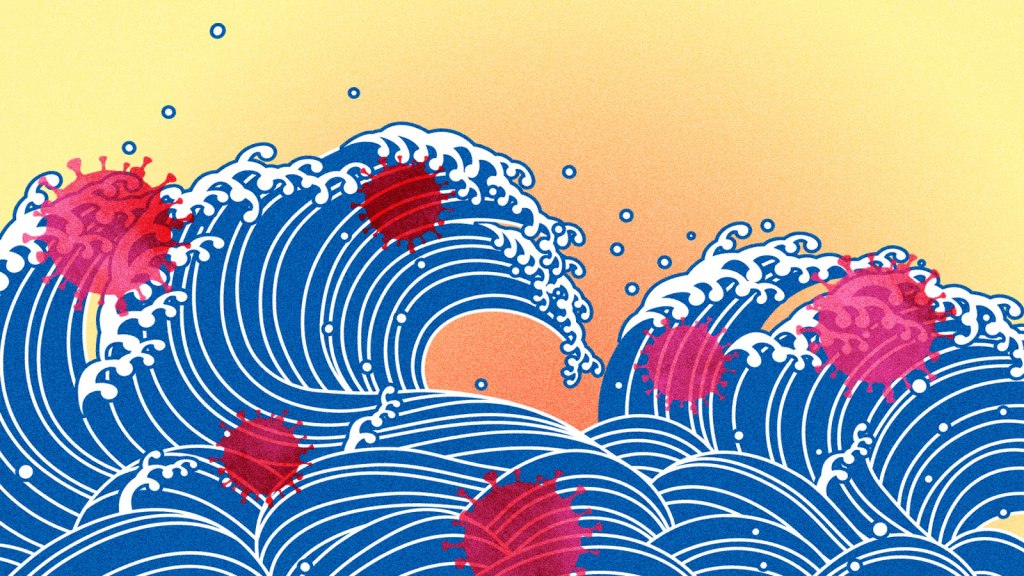 No more ‘war on coronavirus’: In search of better ways to talk about a pandemic

The novel coronavirus has upended how Americans live, work, and love. But one thing’s the same: We’re still warmongering, even when there’s no enemy in sight.

The pandemic is being called World War III, President Trump declared himself a “wartime” president, and there’s no shortage of headlines about “fighting” coronavirus, the so-called “hidden enemy.” It seems like when we face any tough problem, whether it’s climate change or cancer, the same script appears. These fighting words can get people’s blood pumping, but it can sometimes backfire.

Research shows that the metaphors of war narrow our point of view, blinding us to alternative ways to solve problems. During pandemics, it can evoke xenophobia; for climate change, it can widen partisan divides, shrinking common ground. And if repeated often enough, war metaphors can make people feel like they’re actually living in wartime, paralyzing them with fear.

Metaphors rely on common knowledge, so new ones can be difficult to come by. “We relapse to the ones we’ve used before, the ones that are common and frequent,” said Stephen Flusberg, an associate professor of psychology at Purchase College in New York.

Still, there are plenty of shared experiences to draw on that don’t involve war. So, in search of new metaphors, I went hunting for experts attempting to develop a new lexicon around coronavirus and climate change, and I found professors, writers, and thinkers doing exactly that. Using the #ReframeCovid hashtag on Twitter, started in Spain, linguists are discussing the rainbow of possible metaphors that could help us better understand the different aspects of life during the pandemic. Two linguists at the University of Lancaster in England, Veronika Koller and Elena Semino, are seeking alternative ways to talk about coronavirus. They’ve collected more than 200 metaphors from languages around the world and, with the help of others, compiled them in a giant spreadsheet. Here are some examples from their collection, and from around the web.

Our overheating planet is churning out deadlier hurricanes, floods, and fires. Coincidentally, natural disasters are also frequently used to describe the pandemic. You may have heard that COVID-19 outbreaks may come in “waves,” or that hospitals are weathering a “tsunami.” Whereas warlike language gets people geared up to fight, the tsunami metaphor sends a message to hunker down, Flusberg said, so it better matches the type of action health officials are encouraging. One possible drawback, Koller said, is that comparisons to natural disasters could make people even more anxious.

Take American football. It’s often compared to a battle in which nobody dies (though there are plenty of casualties). Yet there are plenty of other sports, like long-distance running, that emphasize endurance rather than battle lines. Koller has seen many people turn to racing metaphors to conceptualize the enduring nature of a pandemic.

“Understand that this is a marathon,” Aisha S. Ahmad wrote in the Chronicle of Education. “If you sprint at the beginning, you will vomit on your shoes by the end of the month.” It’s reminiscent of the so-called “race” against climate change.

To understand how the virus affects our bodies, education metaphors may be (ahem) instructive. In On Immunity: An Inoculation, Eula Biss writes that talk of viruses as “invaders” limits our understanding of the immune system. An infectious disease expert once gave her a thorough introduction to the workings of immunity, explaining how pathogens “tutor” the immune system. “Fighting” an illness can make you feel under siege and stressed. Under an educational frame, your body learns how to produce antibodies. “You feel like you’re making progress,” Biss said in an interview with the public-radio show On The Media. “You’re getting somewhere.”

One creative metaphor to describe “physical distancing” evokes the image of an orchestra. As any conductor knows, it’s a challenge to get a bunch of musicians to play quietly — there’s always a showoff on stage. “Social distancing is like asking a string section to play pianissimo: it only works if everyone does it,” tweeted Classic FM, a radio station in the U.K.

A storyline from the Harry Potter books can help illuminate the Trump administration’s slow response to coronavirus. Late in the series, the Ministry of Magic — the governing body for wizards — refused to acknowledge that the villain, Lord Voldemort, had returned with a vengeance. By the time the evidence was impossible to deny, the ministry had lost its chance to prepare for the worst, and all hell broke loose.

Husband just told me, “watching the federal government deal with COVID-19 is like watching the Ministry of Magic deal with Voldemort’s return,” and damn if that isn’t the best take I’ve heard this month

What if, instead of living in “wartime,” we’re living in a “dark time”? It implies that someday we’ll be on the other, sunny side of coronavirus, when we’ll be grilling in the park, attending weddings, and maybe sitting down at restaurants! “It’s no help if people are paralyzed with anxiety, without any hope, without anything to live for,” Koller said.

Arundhati Roy, the award-winning author and activist, called the pandemic a “portal” between one world and the next. “We can choose to walk through it, dragging the carcasses of our prejudice and hatred, our avarice, our data banks and dead ideas, our dead rivers and smoky skies behind us,” she wrote in the Financial Times. “Or we can walk through lightly, with little luggage, ready to imagine another world.”

Of course, metaphors are just one piece of the way we talk about our problems. “We’ve got to stop the war metaphor,” but that’s just the beginning, said John Campion, a poet and lecturer in the English department at the University of California, Berkeley. An obsession with power is baked into our language, he says, and it’s often hard to imagine other ways of framing crises.

“How do you get out from under that and begin to make a kind of language that is actually healthy?” he asked. “It’s very difficult. I’ve been doing it a lifetime and just feel like I’m beginning to get a grasp of it.”

A recent anthology, An Ecotopian Lexicon, is full of essays focused on loanwords — from other languages or science fiction, for example — that provide people with a picture of how to adapt and flourish as the world heats up. The words that resonate best seem to be the ones we already understand but haven’t yet articulated, said Brent Ryan Bellamy, the co-editor of the book. The term solastalgia, for instance, describes a feeling of distress caused by the disappearing natural world — a sort of homesickness for a landscape that’s vanished.

It’s hard to know whether any of these experiments, from new metaphors for coronavirus to a new language for the climate crisis, will have any effect. Bellamy’s “wildest hope” is that these loanwords can illuminate some aspect of our shared experience that we didn’t realize we had — in some ways, doing the opposite of a war metaphor.