The world is drowning in used face masks. Should we turn them into fuel? 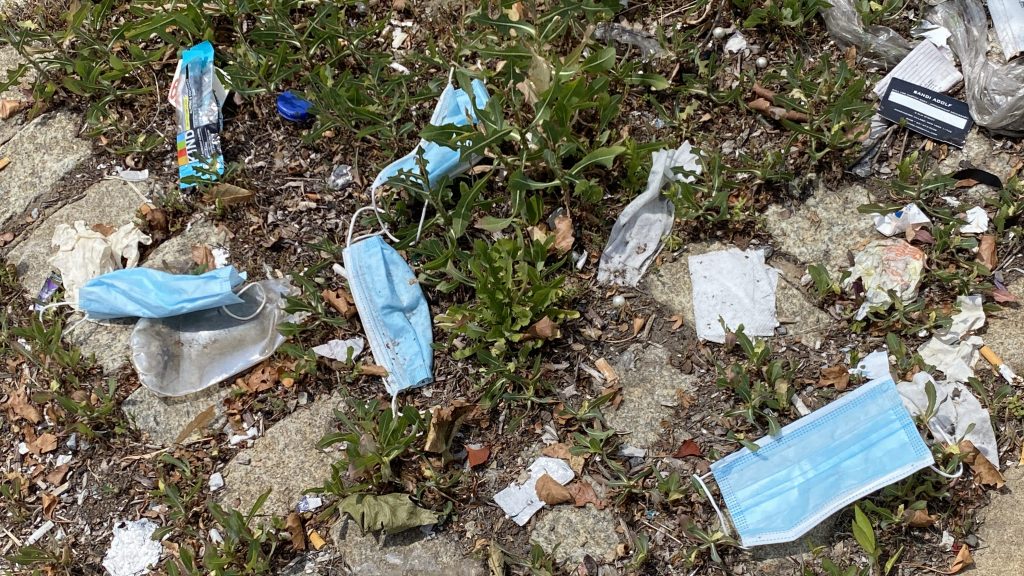 The world is drowning in used face masks. Should we turn them into fuel?

Ever since the COVID-19 pandemic began, medical first responders and health care workers have relied on plastic-based, single-use personal protective equipment (PPE) like masks and gowns to shield themselves from the coronavirus. The result has been a quickly growing mountain of plastic waste.

How to deal with the glut of used medical-grade PPE? There aren’t any silver bullets, and none of the options are very attractive. Under guidelines from the Centers for Disease Control and Prevention (CDC), trashed PPE is treated like any other medical waste, usually with a sanitation process followed by landfilling or controlled incineration — both of which have significant downsides. Incineration spews millions of tons of carbon dioxide into the atmosphere, for example, and landfills leak toxic pollutants into groundwater.

That’s at least better than unregulated disposal, which can emit toxic chemicals into the environment and create a disease transmission vector.

But instead of these deleterious options, a group of experts from the University of Petroleum and Energy Studies in Dehradun, India, has suggested an alternative: PPE should be liquefied into “renewable” fossil fuels and burned.

It’s a process called pyrolysis — also known as “chemical recycling” — and it uses heat to break down plastic in a deoxygenated environment, turning it into liquid oil that can then be burned for energy. In a paper published Tuesday in the journal Biofuels, researchers said it was the most common and most promising method for degrading polypropylene, a main ingredient in N95 respirators, surgical masks, and single-use protective gowns. Compared to landfilling and plastic incineration, they called chemical recycling an “environmentally friendly” alternative.

“It is an efficient and economical method of recycling polypropylene,” the study said, arguing that chemical recycling can not only prevent plastic pollution that would cause “severe after-effects to humankind and the environment,” but can also create a “clean” liquid fuel to meet increasing global energy demand.

But is it really recycling if the plastic doesn’t get turned back into plastic? Critics from the Global Alliance for Incinerator Alternatives (GAIA) said no in a report last week, pointing out that so-called “chemical recycling” doesn’t create a closed loop for used plastic. Once it’s thrown away, it gets burned as a fossil fuel and never becomes another bottle, grocery bag, piece of packaging, or surgical mask, ever again.

In fact, GAIA explained, chemical recycling contributes to climate change and releases toxic chemicals into the atmosphere — things like benzene, BPA, cadmium, and lead, which are variously linked to leukemia, reproductive malfunction, lung problems, and neurological degeneration. And since the fuel produced through chemical recycling is often burned offsite at facilities located in low-income, nonwhite neighborhoods, these frontline communities often bear the brunt of this toxic pollution.

“The carbon burden is so high and the emissions are so toxic,” said Stephanie Wein, a clean water and conservation advocate for PennEnvironment, an environmental nonprofit.

Lori Hoepner, assistant professor of environmental and occupational health sciences at SUNY Downstate Health Sciences University, also worries that chemical recycling could incentivize or justify an even greater dependence on single-use plastic in general. “It could potentially lead to an even greater glut that needs to be repurposed,” she said.

But medical-grade, disposable PPE like polypropylene N95 masks is still the safest option for health care workers who are testing and treating patients for COVID-19. For these high-risk personnel, only certified medical-grade masks have a filtration system that can reliably filter out the smallest coronavirus-carrying droplets. Until we can make an effective reusable PPE kit — and there’s research moving in that direction — plastic medical waste will have to be dealt with somehow.

Hoepner says that for these plastics that we can’t do without, the question is how to cause the least harm. “We have to figure out which option has the least hazardous and non-beneficial consequences,” she told Grist.

Ruling out chemical recycling as dangerous and “incompatible with a climate safe future,” that brings us back to incinerators and landfills — and picking between these two options can feel like a Morton’s fork. Incinerators produce much more nitrogen oxide, particulate matter, sulfur dioxide, ozone, and carbon dioxide. On the other hand, landfills may produce more benzene and pose a greater threat to ecosystems, due to disposed substances like formaldehyde.

Most environmental advocates have come out strongly on the side of landfills. Not because landfills are great, but because it may be safer to try containing toxic chemicals in a landfill than purposefully ejecting them into the atmosphere, as Elena Polisano, oceans campaigner for Greenpeace U.K., said in an interview with BBC. Other environmental activists have cited concerns about incinerators’ disproportionate burden of pollution on low-income communities and communities of color.

“There are just better solutions to the waste crisis than creating a ton of air pollution and adding to the climate crisis,” Wein said. For plastic like single-use PPE that can’t be recycled with existing technology — and that doesn’t include pyrolysis, which isn’t real recycling — “the most responsible route is landfilling,” Wein told Grist.

One consolation, however, is that we can still limit the amount of PPE getting thrown away. For everyone who isn’t a health care professional or a medical first responder, health experts from around the world have stressed the safety of reusable PPE like face masks. The Centers for Disease Control and Prevention already recommends a cloth face mask for most people, and the organization provides basic washing instructions that protect against the virus.

“The general public should be using reusable face masks and performing routine laundering at home,” said Jodi Sherman, associate professor of anesthesiology and epidemiology at Yale, in a statement to Greenpeace.

Hoepner agrees. In the short term, we may simply have to put up with a large volume of disposed PPE waste from medical facilities. But that shouldn’t prevent us from moving toward a plastic-free future. “As we emerge from the shockwaves of COVID-19,” she said in a statement, “society must re-commit itself to the reduction of plastic use in favor of reusable materials, particularly in consumer goods, but also by actively seeking safe reusable alternatives to plastic for proper personal protection from COVID-19.”