Why are we waiting for billionaires like Jeff Bezos to save us? 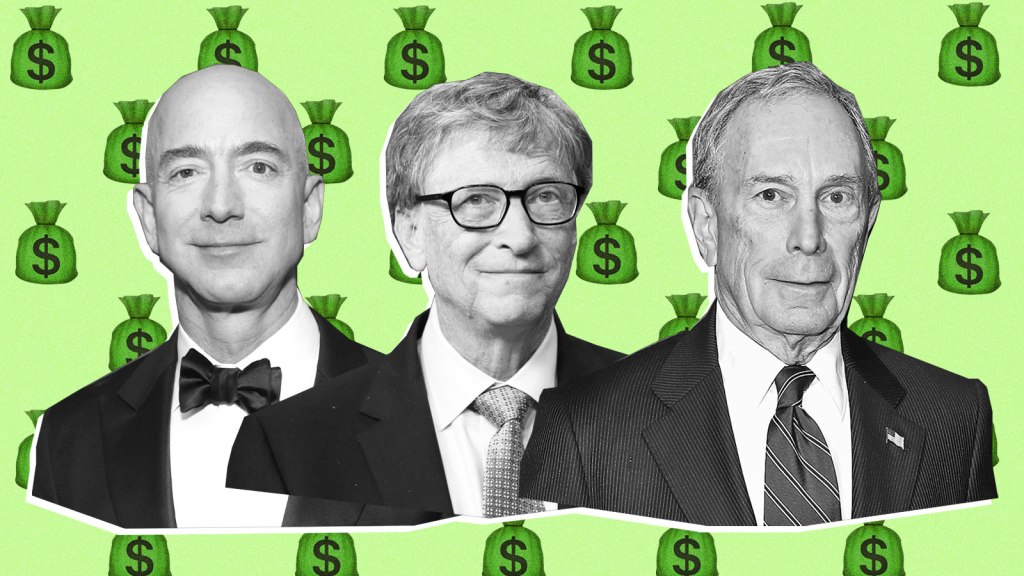 Why are we waiting for billionaires like Jeff Bezos to save us?

What if the government actually met society’s needs? Instead of pulling out of the Paris climate agreement amid a planetary crisis and withdrawing funding from the World Health Organization during a pandemic, the United States could lead the way on climate change and public health, possibly averting the worst outcomes. Imagine that.

The Trump administration’s approach of ignoring catastrophes until the last minute doesn’t appear to be changing anytime soon. That’s left billionaires to fill the vacuum of leadership. From Mark Zuckerberg of Facebook to Jack Dorsey of Twitter, the ultra-wealthy are forking over huge sums of money for coronavirus relief efforts. Bill Gates, the cofounder of Microsoft, is funding efforts to create home test kits and develop a vaccine. Billionaires are increasingly stepping up to take on what’s supposed to be the government’s job — not just for coronavirus, but also for global problems like climate change.

In February, Jeff Bezos, the founder of Amazon who’s reportedly on track to become the world’s first trillionaire by 2026, pledged to give $10 billion to activists, scientists, and nonprofits to take on the climate crisis. Bezos joins the elite ranks of Mike Bloomberg, Tom Steyer, and Gates in popularizing so-called climate philanthropy. The last few years have brought the death of coal and the rise of renewable energy, in no small part because of their efforts.

The ultra-wealthy are also redefining the agenda, helping to shift power out of the hands of the government and into the hands of the elite. Last year, the Swiss banking giant UBS reported that billionaire philanthropists “are seeking new ways to engineer far-reaching environmental and social change.” So is it now up to the super-rich to decide how to fix the world?

Critics say that there’s a dark side to billionaires’ good deeds. “A few ultra-wealthy individuals are making decisions about the future of the planet with little accountability or transparency,” said Matthew Nisbet, a professor of communication and public policy at Northeastern University in Boston. The risk is that people become dependent on billionaire do-gooders, much as in the Victorian era, taking care of the poor was seen as charity, not a fundamental responsibility of government. And even if they’re doing good things now, tycoons can stop or reverse course on a whim.

Philanthropists tend to approach solving the world’s problems in a way that doesn’t imperil their own fortunes. “[W]hen elites assume leadership of social change, they are able to reshape what social change is,” Anand Giridharadas writes in the best-selling Winners Take All: The Elite Charade of Changing the World, “above all, to present it as something that should never threaten winners.”

The climate movement has a fraught relationship with billionaires. A 2015 Oxfam report showed that the world’s richest 10 percent were responsible for nearly half of global emissions. Many fortunes were built on fossil fuels, starting with John D. Rockefeller, who founded Standard Oil, an empire that turned him into America’s first billionaire in 1916. In more recent times, plutocrats like the Koch brothers spent their riches funding groups that have attacked climate science and legislation to rein in emissions.

“What kind of message and signal does it send that the climate movement is now a billionaire movement?” Nisbet asked. Backing from billionaires puts climate groups in an awkward place; after all, many activists want to tax billionaires heavily, break up Big Tech, and y’know, overhaul capitalism as we know it.

Nisbet argues that the money coming from big foundations and billionaires should be scrutinized, whether it’s from the Kochs or climate-friendly philanthropists. Whereas politicians are held accountable to the electorate, charitable foundations answer to … pretty much no one. “Absent the checks and balances of democratic institutions or even the competitive marketplace, who will scrutinize this insulated world’s activities, shining a critical light on its decisions, evaluating its successes and mistakes?” Nisbet said.

If you’re thinking “what about journalists?” then prepare yourself for some sobering news. Billionaires also own many of America’s influential media companies, putting reporters in a tough spot when their funders start making the news. When Bloomberg, the former mayor of New York City, joined hedge-fund magnate Tom Steyer in buying his way into the Democratic presidential primary last year, the thousands of journalists working for Bloomberg News were suddenly banned from investigating him and his Democratic rivals.

Billionaires benefit from giving their money away — and not just in the feel-good “I donated” way. Philanthropy became a PR strategy in the early 1900s when Rockefeller, an oil magnate with a bad reputation, rehabilitated his name by donating to charitable causes like art museums. Soon, other robber barons caught on to the practice.

As the richest of the rich accumulate more wealth, more power, and more of the government’s duties (yeah, even space exploration), it’s got people wondering whether America’s democracy is fading into an oligarchy. With the world facing multiple catastrophes and the United States stepping away from a leadership role, our collective fate is increasingly in their hands. If we’re nice, maybe Elon Musk will make some room for us on Mars.