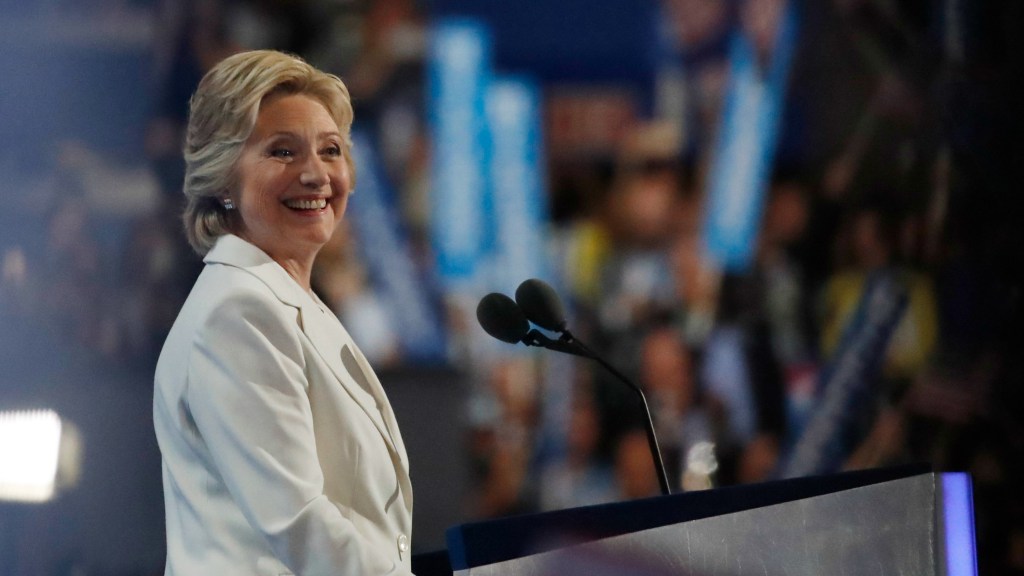 REUTERS/Carlos Barria
She blinded them with science

PHILADELPHIA — One of the biggest applause lines in Hillary Clinton’s nomination acceptance speech on Thursday night might surprise you: “I believe in science.”

The crowd roared when she said it, because they knew what she meant: She accepts climate science, unlike Donald Trump and many politicians in his party.

Clinton followed that up by saying, “I believe that climate change is real and that we can save our planet while creating millions of good-paying clean energy jobs.”

A few minutes later, she expanded on that idea: “In my first 100 days, we will work with both parties to pass the biggest investment in new, good-paying jobs since World War II. Jobs in manufacturing, clean energy, technology and innovation, small business, and infrastructure. If we invest in infrastructure now, we’ll not only create jobs today, but lay the foundation for the jobs of the future.”

In her barn burner of a speech, Clinton mentioned climate, energy, and environmental issues several times. She said she cares about “the exact level of lead in the drinking water in Flint, Michigan.” She said she is “proud” that America shaped the Paris climate agreement and that the next step is “to hold every country accountable to their commitments, including ourselves.”

Other speakers on the final night of the Democratic National Convention talked about climate policy and environmental justice too (though none of them matched the intensity of California Gov. Jerry Brown, whose speech on Wednesday was an epic Trump takedown on the topic of climate change).

The convention’s only speech from a full-time environmental activist came early in the program, when League of Conservation Voters President Gene Karpinski expounded on the contrast between the presidential candidates. “Climate change is no joke,” said Karpinski, referencing Trump’s habit of mocking climate science. “From floods in Miami, to droughts in California, to forest fires in Colorado, and rising sea levels in Virginia, it’s clear. Climate change is here, and it’s having a devastating impact.”

New York Gov. Andrew Cuomo, during his speech, pointed to his fracking ban as an example of successful progressive governance in action. (Colorado Gov. John Hickenlooper, who has taken a much more pro-fracking stance, also spoke, but he notably avoided any mention of the subject.)

Presenting climate change as an economic opportunity rather than an impending crisis to be averted fit with the whole convention’s relentlessly optimistic attitude — especially Clinton’s. The Democrats’ political calculation is that Americans will respond more to hope than to the negativity of the Republican National Convention last week. Whether or not that works for Clinton’s campaign, it is almost certainly the best way forward on the issue of climate change itself.