Industry events left an oily sheen on the Democratic convention 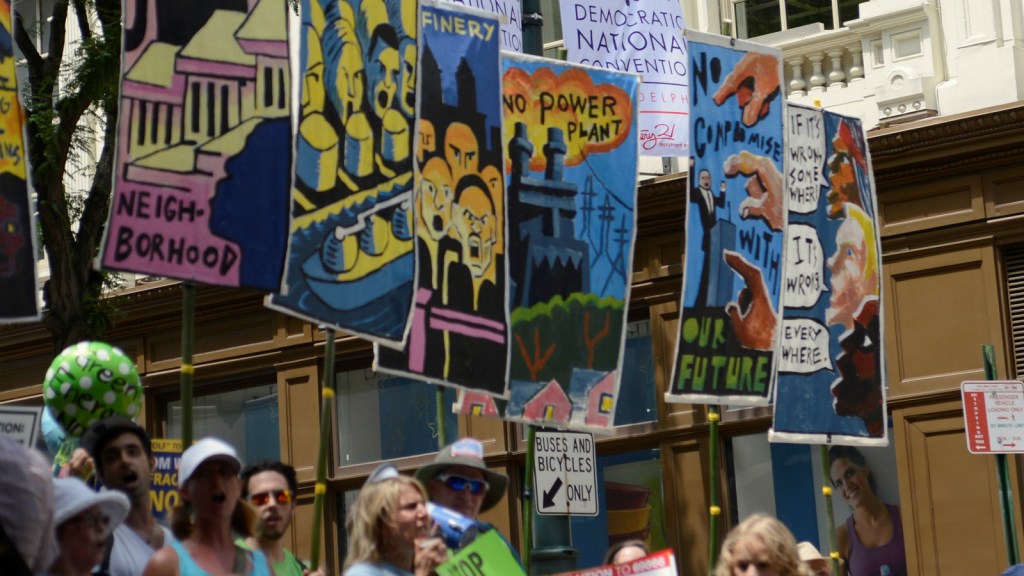 Industry events left an oily sheen on the Democratic convention

A series of events sponsored by the oil and gas industry “polluted” the Democratic National Convention with climate denialism and should have been boycotted by leading Democrats, according to environmentalists.

The American Petroleum Institute (API) underwrote five events hosted in Philadelphia during the convention by media organizations Politico and the Atlantic.

The events, which promoted API’s Vote4Energy campaign, provided delegates and other attendees with literature and signage extolling the benefits of oil and gas drilling.

While both Politico and the Atlantic said that API, the U.S.’s leading fossil fuel lobby group, did not hold any sway over the content of the panel discussions, green groups claimed the events allowed the denial of climate science to seep into the Democratic gathering.

“These polluting events have a complete disrespect for the scientific facts and we are very concerned about the influence that fossil fuels have here,” said Brad Johnson, executive director of Climate Hawks Vote, a political action group which put together a 10,000-strong petition urging Democrats to boycott the events.

The group said it was disappointed the Atlantic and Politico had accepted the lobby group’s money. “API deliberately disseminate misinformation and journalists should have ethical and professional qualms about that,” Johnson said.

A batch of documents released earlier this year showed that API was made aware of “serious worldwide environmental changes” caused by the burning of oil and gas more than 45 years ago. Despite this knowledge, the industry funded and encouraged climate denial groups for several decades before finally acknowledging the realities of climate change.

The 2016 Democratic platform calls for the Department of Justice to “investigate allegations of corporate fraud on the part of fossil fuel companies accused of misleading shareholders and the public on the scientific reality of climate change.”

During a somewhat fraught debate, which included several attempted stage invasions by anti-fracking activists and a threat by one Bernie Sanders supporter to pour soup over Houser, each attendee was given booklets produced by API.

The literature, called “Principles for American Energy Progress,” hails a “new era” in free market energy in which increased domestic oil and gas production has lowered energy and gasoline prices. The booklet cites unsourced research that shows 77 percent of Americans support increased production of oil and gas, including 64 percent of Democrats.

The booklet, which does not contain the words “climate change,” criticizes regulation and the “shifting of standards to levels that achieve no demonstrable health benefit.” An accompanying website cites the activities that oil and gas make possible, such as picnics.

Jack Gerard, president and chief executive of API, addressed the crowd before the panel talk and praised the impact of “abundant, affordable, clean-burning natural gas” for bringing down America’s total greenhouse gas emissions.

“When you look at the science and data, we can help consumers, help the country, and lead the world in environmental protection,” he said, ignoring a cry of “that’s a lie” from a protester.

Politico and the Atlantic also held API-sponsored events at the Republican National Convention in Cleveland last week. According to the Intercept, the Washington Post also hosted a climate event, in which Republican congresswoman Marsha Blackburn claimed the world was “cooling down.”

In fact, there is a clear trend of warming temperatures, with 2016 highly likely to be the warmest year on record. It will beat a mark set in 2015, which itself topped record heat in 2014. Scientists estimate that about three-quarters of all discovered fossil fuels must remain unburned if the world is to avoid disastrous climate change. While natural gas is far less carbon-intensive than coal or oil, it can still lead to significant emissions, particularly if methane is released during drilling.

Politico pointed the Guardian to its events policy, which states: “We welcome suggestions from sponsors, however, final decisions about event content remain with the Politico newsroom.” It adds that Politico “does not permit sponsors to sit on panels that they underwrite.”

A spokesperson for the Atlantic said the publication has “full editorial control of what’s on stage at our events; the underwriter plays no role in that part of the process. We make all decisions about our content: speaker and moderator selection, the experience on stage, the questions asked.”

She added that the events “bring a range of viewpoints to the stage and never promote one point of view or another.” Neither Politico nor the Atlantic would disclose how much API paid for the sponsorships.

A spokesperson for API said: “Energy is our candidate, and that is a message we continue to share with all candidates as energy is a major issue for American voters.

“We can continue to lead in providing low-cost energy to consumers while improving the environment. They are not mutually exclusive.”

Many of the API-funded events have featured politicians and commentators who are in favor of expanding drilling for oil and gas. The Politico panel on Wednesday was more focused on attacking Donald Trump, with Inslee calling the Republican nominee “part of the Flat Earth Society” and Houser labelling the Republican position on climate change “insane.”

Gene Karpinski, president of the League of Conservation Voters, said API was trying to “fool the public.”

“That’s their business model and they will do all sorts of things to mislead and misinform people to push their own survival as a dirty, dangerous source of fuels,” he said.

“We wish that the media could do what they do with their own resources. The API is deceiving the public, acting like climate change doesn’t exist at a time when we are seeing it’s an amazing threat right now with the heat waves and droughts and forest fires. They are pushing propaganda.”

Karpinski, who spoke to the DNC on Thursday before Clinton’s headline speech, said the Democratic platform was “the most aggressive on climate change ever seen.” The platform proposes a swift transition to 100 percent renewable energy and a price on carbon, although Clinton has yet to fully embrace either of these goals.

“We have to make sure that [Clinton] wins and has a Senate that will work with her,” Karpinski said.

“Donald Trump would be a disaster for the climate, we can’t let that happen. We will either have a climate change champion or a climate change denier as president. The stakes are that high. I’d argue they’ve never been higher.”