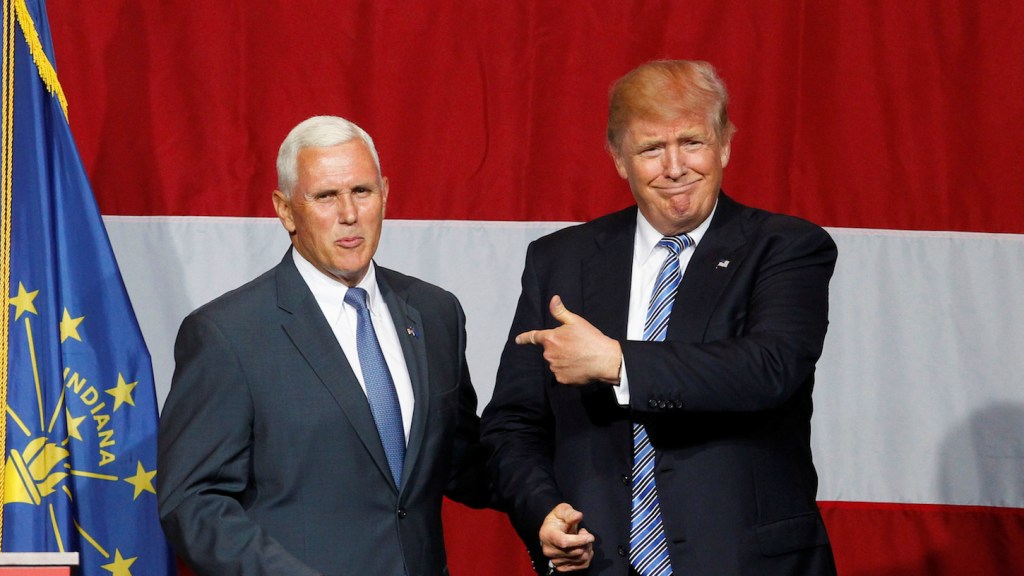 In an uncharacteristically straight-faced manner, Donald Trump has announced Indiana Gov. Mike Pence as his pick for vice president.

I am pleased to announce that I have chosen Governor Mike Pence as my Vice Presidential running mate. News conference tomorrow at 11:00 A.M.

There are some Republican politicians who have tiptoed around whether climate change is human-caused and a real problem, embarrassed by their party’s anti-science reputation. Pence is not one of these Republicans. He is one of your old-school, Flat-Earth science deniers. In fact, he’s been more consistent in his climate denial than Trump, who backed climate action when it was in vogue to do so, before he called climate change a Chinese hoax.

According to the League of Conservation Voters, when Pence was in Congress he voted 201 times against environmental interests and just 18 times in favor. As governor, Pence has sued the Obama administration over its Clean Power Plan and had his state suspend its planning to comply with the plan. He also led the House GOP battle against reproductive rights and Planned Parenthood during his 12 years in Congress.

Overall, Pence has given us a helluva record to comb through. Here are a few choice quotes:

“Global warming is a myth.”

“Global warming is a myth,” Pence declared in a Kyoto-era op-ed on his website, dug up by BuzzFeed. “The global warming treaty is a disaster. There, I said it … The chant is ‘the sky is warming! the sky is warming!’. The only problem is that many Americans, including Vice President Al Gore, didn’t learn of their deceit the last time around and are buying this new bit hook, line and sinker.”

The best part is his conclusion: “I know Monica Lewinsky seems like the most important issue in America but, call me crazy, I think the quiet expansion of the liberal environmentalist agenda by Al Gore and Clinton White House that will cost thousands of jobs could be more important. Say no to the global warming treaty.”

“I’m all for clean coal technology.”

In 2009, he told MSNBC, “I’m all for clean air. I’m all for clean coal technology. I’m sure reducing CO2 emissions would be a positive thing.” But in the same interview, he insisted the science is “very mixed” on climate change and claimed that in “the mainstream media, there is a denial of the growing skepticism in the scientific community on global warming.”

In 2014, he was still adamant that we “haven’t seen a lot of warming lately. I remember back in the ’70s, we were talking about the emerging ice age. We’ll leave the scientific debate to the future.”

Right around the time Pence declared global warming a myth, he insisted smoking wasn’t harmful, according to this quote ThinkProgress dug up from his 2000 campaign website:

“Time for a quick reality check. Despite the hysteria from the political class and the media, smoking doesn’t kill. In fact, 2 out of every three smokers does not die from a smoking related illness and 9 out of ten smokers do not contract lung cancer.”

Asked flatly if he believes in evolution by MSNBC’s Chris Matthews in 2009, Pence faltered: “Um … I, do I believe in evolution? Ah, I, I, ah … I embrace the, uh — the, uh — the view, ah, that God created the heavens and the earth, the seas and all that’s in them.”

With all his shades of science denial, Pence should get along with Trump just fine.