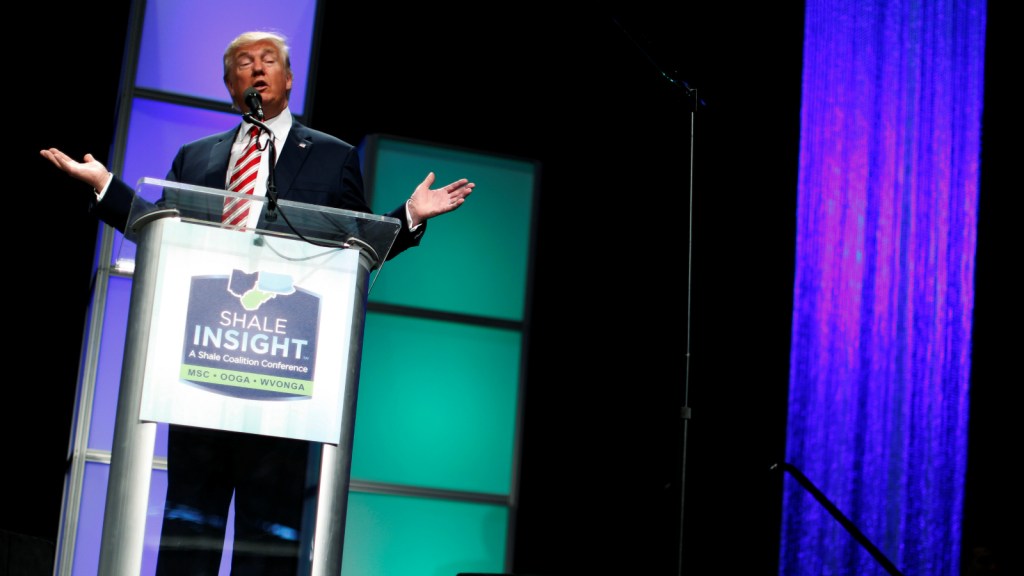 REUTERS/Jonathan Ernst
What's in a name?

Donald Trump gave another speech on Thursday promoting his old energy ideas — not just the same ones he’s been talking about for months, but the same ones Republicans have been talking about for years. While the substance might be standard GOP fare, he’s given it a name that harkens back to a reactionary movement most Republicans would rather forget: the America First Energy Plan.

The phrase “America First” has a chilling history. It was a rallying cry in the 1930s for fascists, isolationists, and anti-Semites who didn’t want the United States to join World War II. Whether Trump intends it as a dog whistle to the far-right or not, the label is accurate: Trump is disregarding the needs of everyone outside of America (not to mention everyone inside America who isn’t in the fossil fuel business). Climate change is a global problem, and Trump wants to make sure the U.S. is not part of the global solution. On top of his plan to dramatically increase dirty energy production, he wants to pull the U.S. out of the international Paris climate agreement.

Trump added another new bit to his shtick on Thursday, while speaking at a fracking conference in Pittsburgh: He totally misrepresented Hillary Clinton’s energy agenda.

“She plans … the aggressive restriction of American energy production,” Trump said. “Her plan will help only her wealthy donors, and global special interests, who benefit from the rigged system. Hillary Clinton wants to put the coal miners out of work, ban hydraulic fracturing in most places, and extensively restrict and ban energy production on public lands and in most offshore areas.”

Does Clinton really want to make America as unenergetic as Jeb Bush? No. Trump’s caricature is filled with falsehoods.

She does not propose to ban fracking in most places — much to the consternation of many environmentalists. Rather, she proposes to regulate fracking to better protect public health and safety.

Whatever one thinks of Clinton’s energy agenda — climate activists think it doesn’t go far enough, conservatives think it’s bad for the economy — it’s just bizarre and nonsensical to claim it will only benefit “her wealthy donors.” Who are these titans of wind and solar energy Trump is talking about? Whoever they are, their ability to donate to campaigns and influence politics is much smaller than the oil, gas, and coal executives that Trump is sucking up to — like fracking magnate Harold Hamm, who even got a shout-out in Trump’s speech.

Changing his mind about the EPA

Trump made one more tweak to his agenda in his speech yesterday: He no longer wants to abolish the EPA. That’s a marked shift from his previous campaign rhetoric. “I will refocus the EPA on its core mission of ensuring clean air, and clean, safe drinking water for all Americans,” he said.

That might sound good, but Trump is still proposing to get rid of key regulations that make it possible for EPA to achieve that core mission. He pledged yet again to “eliminate” the Waters of the U.S. rule, which protects water supplies, and the Clean Power Plan, which would rein in not just climate pollution but the air pollution that directly harms people’s health. Essentially, he’s come around to the standard Republican position: keep the EPA, but don’t let it inconvenience business interests.

Despite the conventional wisdom that Trump represents a new, populist kind of Republican, his energy plans are the same old fossil fuel industry giveaways.