Clinton and climate activists have some real disagreements over fossil fuels 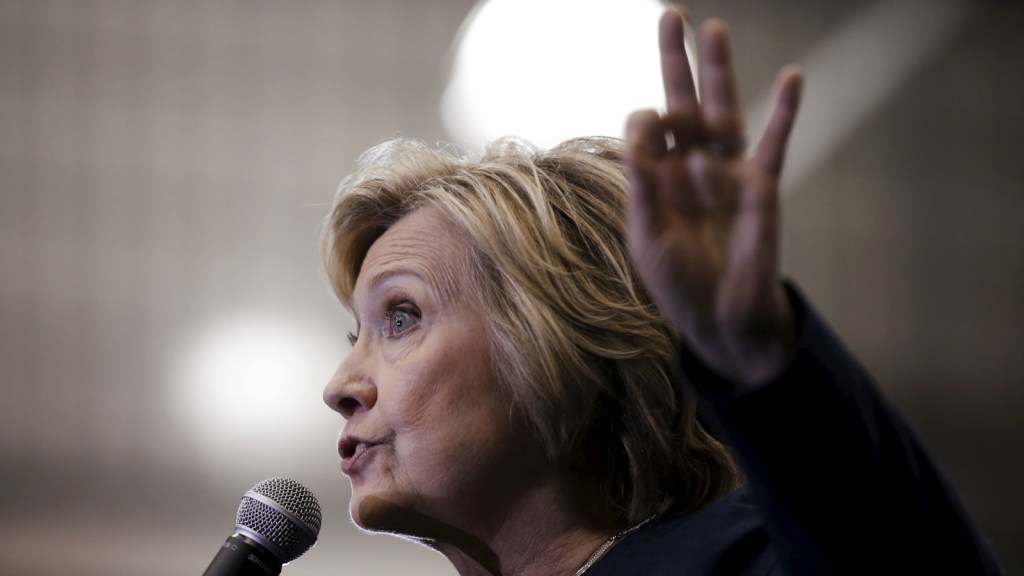 Clinton and climate activists have some real disagreements over fossil fuels

Hillary Clinton agrees with climate activists that we need to shift our electric grid to run on renewable energy. But she doesn’t agree with some of the more hard-core green groups on how quickly a full switchover can be achieved and what policy steps we should be pursuing to make that happen.

Where we are now

To understand the disagreements, it helps to look at the electricity system we have in place currently. Last year, coal and natural gas each generated about 33 percent of electricity in the U.S., according to the U.S. Energy Information Administration, while nuclear was responsible for 20 percent. Renewables contributed only 13 percent, and nearly half of that came from hydropower, which does not have much room to grow.

So getting to a 100 percent renewable grid will be an enormous challenge. A critical first step, endorsed by both climate activists and mainstream Democrats, is moving away from coal, the dirtiest fossil fuel. That’s the big aim of Obama’s Clean Power Plan, which Clinton supports. If the plan is implemented, the EPA projects that renewables will grow to provide 20 to 25 percent of electricity by 2027. (If the plan is struck down by the courts or undermined by a Republican president, the EIA projects the renewable share would rise to 16 percent in 2027.) Renewables will get a further boost from the recently renewed solar and wind production tax credits, but nowhere near enough to approach a 100 percent clean energy portfolio in the next couple of decades.

Clinton may have had these kinds of stats in mind when she said last summer that she wouldn’t stop fossil fuel extraction on public land “until we got the alternatives in place.” She continued, “I could not responsibly say to you that I could automatically stop the source of fossil fuels right away without having a substitute in order to keep the economy going, to keep people employed, to keep the lights on.” She may also have been thinking of cars and other modes of transportation, which overwhelmingly still run on oil, and home heating, which largely relies on oil or gas.

Some energy policy experts point out that the limits on renewable deployment are driven less by technology and economics than by policy. If we had a high enough carbon tax, fossil fuel power would grow more expensive and rare, and wind and solar would get cheaper and more plentiful. Sanders has endorsed such a tax, and Clinton has not. But even if she wanted a carbon tax, no president is likely to get one from the conservative Republican majority that’s expected to hold the House of Representatives through 2023.

Do we still need to be allowing fossil fuel extraction on public lands and in offshore areas?

Given the current political realities, Clinton is indisputably right that we will need some fossil fuels over the next 10 or 20 years. But that doesn’t mean the federal government has to help provide them by leasing public lands and waters to fossil fuel companies.

If all domestic oil, gas, and coal came from public lands, then we’d have to think carefully before ending fossil fuel mining and drilling on them. But that’s not the case. Most of the new oil and gas production from the U.S. fracking boom has been on private land. In 2014, federal areas both on- and offshore accounted for 21.4 percent of U.S. oil production and 13 percent of natural gas. And while the coal industry is more dependent on federal leasing — 41 percent of U.S. production comes from federal land — coal consumption in the U.S. is already dropping and coal companies are looking to ship their goods overseas. So there’s no risk that stopping federal fossil fuel leasing might lead to empty gas tanks or electricity blackouts in the U.S. — especially considering that existing leases companies have already purchased will still yield years’ worth of supply.

A cessation of federal leasing programs would instead just lead the U.S. to produce less fossil fuels, especially coal. That would mean prices — which are currently quite low by historical standards for oil and gas thanks to the fracking boom — might rise a little. But oil and natural gas are global commodities, with prices set by global supply and demand, so a dip in U.S. production would have only a small effect on prices, if any. Coal prices could rise a bit more. If there were higher energy prices, they could slow economic growth, but they wouldn’t have to. If the cost increases were small and gradual, instead of hurting the economy, they might hasten the transition to renewables and spur growth in the clean energy sector. (That’s the same logic behind a carbon tax.)

The Obama administration has started moving to review and reform the fossil fuel leasing programs, and Clinton has endorsed that move. The result could just be charging companies more to extract oil, gas, and coal, or it could be an end to the leasing altogether. The latter is what activists want.

Climate activists argue that public lands should be put to the highest public use, and in a time of climate change, that is not fossil fuel extraction. Instead, it might be aggressive leasing for solar projects and wind turbines. (Clinton recognizes that, which is why she proposes to use public lands and buildings for increased renewable energy generation.) And the federal government getting out of the dirty energy business would send a clear message about the nation’s priorities.

Do we need natural gas as a bridge fuel?

This is a serious point of contention between moderate Democrats like Clinton and Obama and lefty green groups.

Obama’s Clean Power Plan is expected to encourage electric utilities to switch from coal to natural gas more than to renewables, at least over the first few years. The president — like many other Democrats, including some noted climate leaders — sees gas as a lesser evil than coal, since burning it produces half as much carbon emissions.

But research increasingly indicates that methane leakage from fracking operations may eliminate gas’ climate advantage over coal. Obama and Democrats of his ilk have been slower than the environmental community to shift in response to new information about the extent of these leaks. Under pressure from activists, they are picking up the pace. The Environmental Protection Agency has begun working on rules governing leaks from fracking operations.

Clinton recently said that she would regulate methane leaks and other aspects of fracking so comprehensively that there wouldn’t be many places left where fracking happens. That’s short of the virtual ban on fracking that Sanders proposes, but more progressive than Obama’s policies.

Still, even as she talks about tougher regulations on fracking, Clinton continues to say that natural gas should serve as a “bridge” between coal and renewables. That makes no sense if gas is just as damaging to the climate as coal, so we can only assume that Clinton doesn’t believe the growing number of scientists warning that might be the case.

Clinton’s platform on fossil fuels has been moving steadily leftward since she entered the race, as she has come out against Arctic and Atlantic offshore drilling, called for stricter fracking regulation, and endorsed leasing reform. She also backs removing tax breaks for oil and gas drilling.

But climate activists won’t be satisfied until she fully embraces the principle that the government shouldn’t help produce fossil fuels at all — not even natural gas as a supposed lesser evil than coal. Allowing offshore or public lands extraction is a government decision to promote that fuel, even if the leasing rights are more fairly priced. Just because we do need those fuels today doesn’t mean we should be promoting them instead of doing everything possible to reach the point where we don’t need them anymore.