Who might Trump pick for top environmental roles in his cabinet? 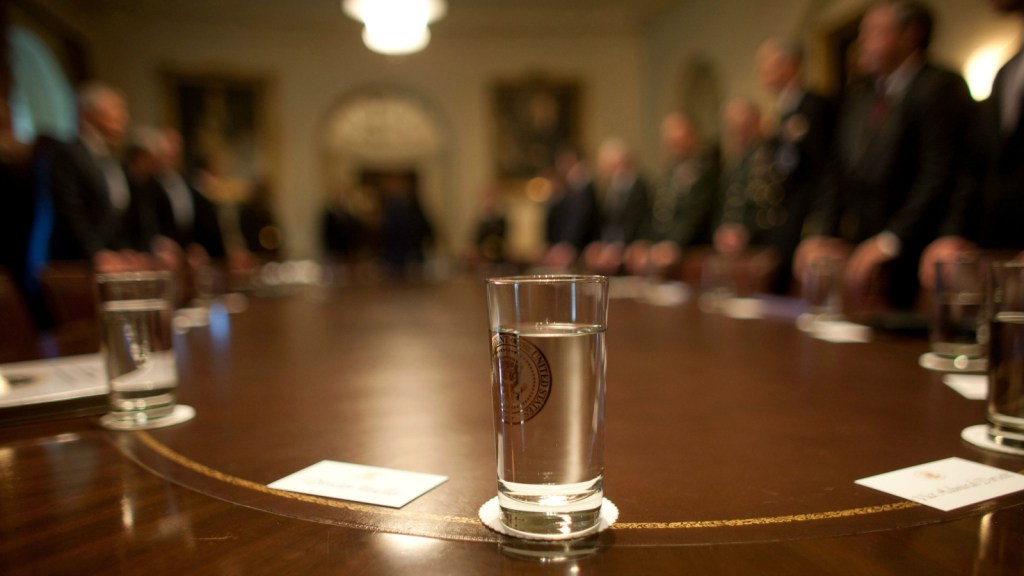 Who might Trump pick for top environmental roles in his cabinet?

Donald Trump’s energy and environment agenda is basically like every other far-right, fossil fuel–based economic prescription, only even more detached from reality. He would rip apart the Environmental Protection Agency and deregulate carbon and other pollutants — assuming Congress and the courts let him. So who would he choose to implement his plans? Conservatives we called wouldn’t speculate on who might be in a Trump cabinet, but we read the tea leaves and came up with a few potential appointees to the jobs that would shape his climate change, energy, and environmental policy. Expect some of these faces to pop up at next week’s Republican National Convention, where they may be implicitly auditioning for jobs in a Trump administration.

Trump has said he would consider former Alaska Gov. Sarah Palin to serve in his cabinet, and Palin has said she would like to be Trump’s energy secretary. Her state’s economy is among the most dependent on oil and gas extraction, though that doesn’t mean she has a clear grasp of energy issues. In fact, she even seems confused about what the job of energy secretary entails. “If I were head of [the Department of Energy], I’d get rid of it,” Palin said last year. A cabinet secretary cannot, in fact, disestablish her department, only Congress can. Moreover, her explanation for what she hoped to accomplish by abolishing DOE — “I’d let the states start having more control over the lands that are within their boundaries and the people who are affected by the developments within their states” — refers to the kinds of decisions that are made by the Department of Interior, which manages federal land.

Another possibility is Rep. Kevin Cramer (R-N.D.), the Trump campaign’s energy policy advisor. Like most of Trump’s confidants, the second-term congressman’s main qualification is that he came over to Trump’s side early: The heretofore obscure pol was among the very few members of Congress to endorse Trump during the primaries. Cramer told Scientific American he would be interested in serving in Trump’s cabinet, potentially as energy secretary. His home state of North Dakota is enjoying a fracking-driven oil and gas boom right now, and Cramer has just the anti-environment credentials Trump will be looking for. Cramer is an ardent proponent of fossil fuels who has called for repealing several of the Obama administration’s most important climate regulations. His lifetime voting score from the League of Conservation Voters is just 1 percent, meaning he takes the pro-environment vote 1 out of every 100 times. Cramer’s advice helped to shape Trump’s intensely anti-regulation energy policy speech to the North Dakota Petroleum Council in May.

Trump’s eldest son, Donald Jr., is an executive with Trump’s company and an active campaign surrogate. Donny — who has American Psycho–style gelled hair and belonged at Penn to ZBT, a fraternity nicknamed “Zillions, Billions, Trillions” — doesn’t look like anyone’s idea of an outdoorsman. But he is an avid hunter and conservationist, and he is in favor of protecting national parks and federal lands. While many Republicans want to hand federal lands over to the states — it’s actually a plank in the draft Republican platform — Donny doesn’t. “I want to keep the lands great,” Donny told Petersen’s Hunting magazine, “and you don’t know what the state is going to do.” He has already mused that he would like to serve as secretary of the interior. Unfortunately for him, that would be illegal, as presidents cannot appoint immediate relatives to cabinet positions.  But Trump Sr. has previously suggested he will ignore laws and constitutional amendments that he finds inconvenient, so maybe he’ll appoint his son anyway.

It’s hard to imagine who would want to head up the EPA in a Trump administration, since Trump has said he wants to abolish the agency. As Greenwire reported in May, “Former EPA Republican political appointees told Greenwire they are wary of signing up for a future administration under their party’s presumptive 2016 presidential nominee.” Maybe someone who really hates the agency would be happy to take the job to help dismantle it — perhaps someone from the fossil fuel industry or an anti-regulatory ideologue from an advocacy group like the American Petroleum Institute or U.S. Chamber of Commerce or a think tank like the Heritage Foundation.

The head of the State Department has considerable influence over global environmental and climate policy. In 2015, Secretary of State John Kerry was one of the leaders of President Obama’s effort to get a strong climate agreement in Paris. In 2020, when countries reconvene to negotiate new climate pledges, the secretary of state could play the same role. In a Trump administration, however, he or she would be charged with undermining any international climate effort, as Trump has said he would pull out of the Paris Agreement. (He can’t, actually, but he could throw a wrench into implementation and renegotiation efforts.)

Sen. Jeff Sessions (R-Ala) is one potential nominee to head up State (he’s also being discussed as a possible running mate). He was among the first elected officials to endorse Trump. Sessions now serves as chair of the Trump campaign’s national security advisory committee, a group otherwise filled with obscure right-wing activists and anti-Muslim zealots. Not only does Sessions disagree with the scientific consensus on climate change, he actually denies that there is a consensus at all. In 2012, when Sen. Barbara Boxer (D-Calif) pointed out that 97–98 percent of climate scientists believe human-caused warming is a problem, Sessions interrupted to disagree: “I don’t believe that’s correct.” Sessions’ lifetime score from LCV is just 7 percent.

Being from New York City, and having made his name developing mixed-use high-rise towers in Manhattan and other urban environments such as Atlantic City, Trump is not your standard anti-urban Republican. “He might stray from recent conservative orthodoxy, which was both culturally anti-city, as well as generally opposed to ideas like mass transit,” says Matt Lewis, a pro-urbanism, pro-transit conservative pundit who blogs for the Daily Caller, in an email to Grist. Trump has said, for example, that he would like to invest more in transportation infrastructure, including high-speed trains, although he hasn’t specified how he would pay for it.

If he does decide to pursue city-friendly transportation policies, Trump might try to recruit Mick Cornett, the Republican mayor of Oklahoma City, for secretary of transportation. Mayors — such as current Transportation Secretary Anthony Foxx, previously the mayor of Charlotte, North Carolina — are often on the short list for that job, given their experience in handling transportation policy and integrating federal, state, and local funding. Cornett has a good reputation among urbanists for supporting mass transit. “Mick Cornett is a great mayor,” says Steve Davis of Transportation for America, a smart growth–oriented group that advocates for transportation investment. “He’s somebody who understands that solutions aren’t partisan when it comes to transportation, or at least shouldn’t be. He’s all about growing the core of his city and his region and he understands that his downtown is a huge asset.”

Then again, Trump might just turn over transportation to the right wing of his party, as he has promised to do with judicial nominations. In that case, he might choose a pro-car, pro-sprawl policy wonk, like Wendell Cox. Currently a fellow at conservative think tanks the Heritage Foundation and the Heartland Institute, Cox has served on the Los Angeles County Transportation Commission and as director of public policy at the American Legislative Exchange Council, better known as ALEC, which ghostwrites right-wing bills for Republican state legislators. Cox is resolutely opposed to public investment in mass transit, arguing that it does not relieve traffic congestion.

Secretary of Housing and Urban Development

As with transportation, it’s theoretically possible Trump would go the moderate, pro-urban route and choose someone like Cornett to head up HUD. But that’s unlikely. The department, in addition to managing federal affordable housing programs, enforces laws against discrimination in housing. Trump may not share congressional Republicans’ antipathy for spending on affordable housing (who knows?), but Trump is likely to lean far right on issues related to racial discrimination. There has been a nasty conservative backlash to current HUD Secretary Julian Castro’s push to crack down on violations of the Fair Housing Act. Perhaps Trump will pick one of Castro’s outspoken critics, such as Rep. Paul Gosar (R-Ariz.), who criticized the anti–housing discrimination effort, calling it “President Obama’s most aggressive attempt yet to force his utopian ideology on American communities disguised under the banner of ‘fairness.’”