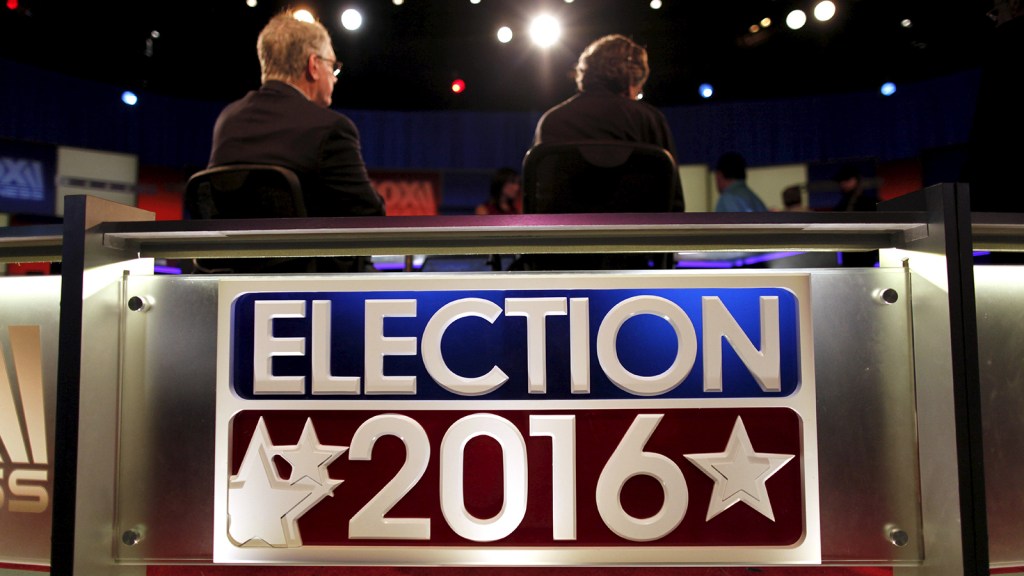 Four years ago, CNN’s Candy Crowley had the perfect opportunity to ask President Barack Obama and challenger Mitt Romney what they would do about climate change. An audience question on gas prices sparked a heated debate about energy policy and oil drilling. But when neither candidate mentioned global warming, Crowley quickly moved on.

“I had that question for all of you climate change people,” Crowley would later respond to critics. But she skipped it, choosing to stick with the economy instead.

The 2012 cycle would turn out to be the first since 1988 in which climate went unmentioned in either a presidential or vice presidential debate — although to be honest, it’s hardly ever a popular topic with moderators. The advocacy group Media Matters for America analyzed the 1,477 questions asked during the first 20 debates of this year’s primary season and found that only 22, or 1.5 percent, covered climate.

“That is really malfeasance on the part of our fourth estate,” says Shawn Otto, a cofounder of ScienceDebate, which pushes for more discussion of scientific issues from candidates.

Because so few moderators have chosen to ask about climate over the years, Grist turned the tables and asked moderators to answer for themselves. Most declined, including Crowley, but those who spoke up said a good debate question includes two elements:

“The exercise was always trying to draw out differences,” says Scott Spradling, a former anchor of New Hampshire’s WMUR, who participated in four 2008 primary debates. “Allow there to be opportunities to clearly state positions by the candidates, but to also draw distinctions so voters can be educated on where they differ.”

Los Angeles Times columnist Doyle McManus, who moderated primary debates in 2000 and 2008, said: “The second big goal, to put it as crassly as possible, is to produce a good television show.” Climate, apparently, gets poor ratings — a conclusion you can also draw from the scant amount of coverage it receives on the nightly network news.

Despite that, Fahey asked one of the most straightforward questions on climate in recent debate history: “Is science wrong on global warming?” he queried GOP hopefuls in 2007. “And what, if any, steps would you take as president to address the issue of climate change?”

Environmentalists say the focus on other issues is an industry problem. “The media themselves think of climate change as an environmental issue, and they have niche reporters on it,” says Vicki Arroyo, executive director of the Georgetown Climate Center. “They’re not the reporters who moderate debates. Their questions tend to go more to what’s in the news that week or some of the political attacks, some of the partisan stuff, some of the issues that they consider more immediate — and even silly things.”

Juliet Eilperin, the Washington Post’s White House bureau chief (and a former environmental reporter), says debate moderators rarely have environmental expertise. “While I think it’s most notable in terms of the moderators, you also see that on the trail itself. The candidates may not be asked about this as much because the people who are with them day in and day out have not been immersed in these issues.”

Will this year be different? Republican nominee Donald Trump and Democratic nominee Hillary Clinton will meet in New York on Monday night for their first debate, and climate change shows signs of becoming a more salient election issue. This year’s Paris Climate Accord, a string of temperature records, and Clinton primary challenger Bernie Sanders have made the issue increasingly central in 2016.

An August poll showed 65 percent of adults want the U.S. government to act on climate change domestically and abroad. And a July analysis from Yale and George Mason showed the highest percentage of Americans alarmed about climate change since 2008 — but also the deepest gulf between climate voters and deniers since that same year.

“Climate change began as an issue that was obscure and little known and poorly understood,” says McManus, the L.A. Times columnist. “It is now one of the signal issues that divides the two parties.”

With political pressure building for climate action, advocates are also pushing for more airtime on climate during the debates. Several environmental organizations, including 350.org, the League of Conservation Voters (LCV), and Climate Truth, have created petitions, mobilized their hundreds of thousands of members, and lobbied via social media to challenge moderators on climate. For the upcoming debates, LCV, Media Matters, the NRDC Action Fund, and others have collaborated on a petition calling for climate questions, which now has over 100,000 signatures. An effort spearheaded by the same coalition has pushed out more than 90,000 emails to moderators of the September 26 debate.

Sometimes pressure works. During the Republican primary, Climate Truth worked with a group of 21 Florida mayors on letters to moderators that helped get airtime for two climate questions.

“Numbers matter,” says Spradling, the WMUR anchor. “The more people are asking that question, the more likely that question gets asked in higher-profile debates.”

McManus calls Trump’s claim that climate change is a hoax “catnip for a debate question.” In other words: good TV.