When Apple announced new climate goals last week, the tech giant revealed that some of its sleek, silvery laptops will include a novel material: “low-carbon” aluminum. The lightweight metal is chemically the same as the mass-produced version used in products like foil, soda cans, bike frames, and car doors. But it’s made using a different industrial process — one that doesn’t result in the direct release of greenhouse gases.

Apple is poised to become the first company to include some of this low-carbon aluminum in its products. For experts in the field, this amounts to a breakthrough after decades of development. But while the laptops prove this new approach is viable, researchers are still figuring out how to scale up the material’s production so it can be an option for the entire aluminum sector. If they succeed, the alternative process could eliminate a significant chunk of aluminum’s carbon footprint.

“This is a pivotal moment,” Donald Sadoway, a professor of materials chemistry at the Massachusetts Institute of Technology, or MIT.

The news arrives as the global aluminum industry grapples with rising greenhouse gas emissions. Even as consumers diligently recycle cans and electronics, repurposed aluminum still only accounts for about one-third of the global market. All told, producing new aluminum results in about 1 percent of global annual emissions. But demand, production, and consumption have climbed in recent years — particularly in China, which still relies heavily on coal-fired power plants.

Apple said aluminum represented 27 percent of its product manufacturing footprint in 2015. The tech firm now uses more recycled aluminum in its devices and prioritizes suppliers who run their facilities with hydropower, not coal. Such efforts have reduced Apple’s aluminum-related emissions by 63 percent, the company reported in March. To address the rest of its aluminum footprint, Apple is partnering with the firm Elysis to create a supply chain for low-carbon aluminum. In July, Apple announced the first batch of the material would be incorporated into its 16-inch Macbook Pros.

Neither company disclosed how much of the novel aluminum will be mixed into the Macbook Pros. But once laptops hit the shelves, they could potentially spur a larger shift toward cleaner materials in a highly carbon-intensive industry.

“That will break open the floodgates for all sorts of other consumers to say, ‘We want green aluminum, too,’’’ Sadoway said.

Aluminum is the most abundant metal in the Earth’s crust, though it doesn’t naturally occur in an easy-to-scoop form. Mining companies must scrape topsoil to extract bauxite, a reddish clay rock that’s rich in alumina (also called aluminum oxide). Refineries next separate out alumina so it resembles a fine white table salt. Finally, the alumina is heated and melted — or smelted — to make aluminum. This last step contributes the most to climate change, as it results in the direct release of greenhouse gases, and it’s where researchers are searching for innovation.

Smelting involves dissolving alumina in a molten salt bath that’s heated to over 1,700 degrees Fahrenheit. Large carbon blocks (or “anodes”) are lowered down into the highly corrosive bath; electrical currents then run through the entire structure. Aluminum deposits at the bottom as oxygen combines with carbon in the blocks, creating carbon dioxide as a byproduct.

On average, the electrochemical process of smelting contributes about 14 percent of total emissions from global aluminum production. Another 70 percent comes from the electricity used to run the smelters, said Guðrún Arnbjörg Sævarsdóttir, an associate professor at Reykjavik University in Iceland. However, in places where smelters tap into clean power, there is virtually no emissions from electricity use. So the biggest carbon challenge is the smelting process itself, she said.

Elysis, based in Montreal, is a joint venture of the global mining giants Alcoa and Rio Tinto and is supported by the Canadian government. In lieu of carbon blocks, Elysis uses materials that can separate aluminum without causing a chemical reaction. The company made its first commercial batch last year at the Alcoa Technical Center in Pittsburgh, and it sold the supply to Apple in December. The two-year-old firm is currently building a $37 million ($50 million CAD) research facility in Saguenay, Quebec.

Elysis hasn’t shared exactly which materials it uses in its system. But scientists around the world have studied a similar concept since the 1980s. The basic idea is to use chemically inactive, or “inert,” metallic alloys in the anodes, through which the electrical currents flow. MIT’s Sadoway previously researched carbon alternatives as a way of reducing electricity use in smelters. Today, programs in China, Norway, Russia, and Iceland are using inert anodes to make aluminum in lower-temperature conditions. Arctus Metal, a small firm in Reykjavik, recently produced its first batch — a one-pound ingot — from its lab.

“This is like the Holy Grail of aluminum production,” Sævarsdóttir said of the efforts.

Sævarsdóttir is involved with Arctus Metal’s research on carbon-free smelting. The company is now scaling its demonstration unit, which uses a 500-amp electric current, to run on up to 10,000 amps, said CEO Jón Hjaltalín Magnússon. (A commercial-scale smelter will run on up to 200,000 amps.) If adopted by Iceland’s three aluminum smelters — which use geothermal and hydropower — the technology would eliminate about one-third of the country’s total emissions, he said. 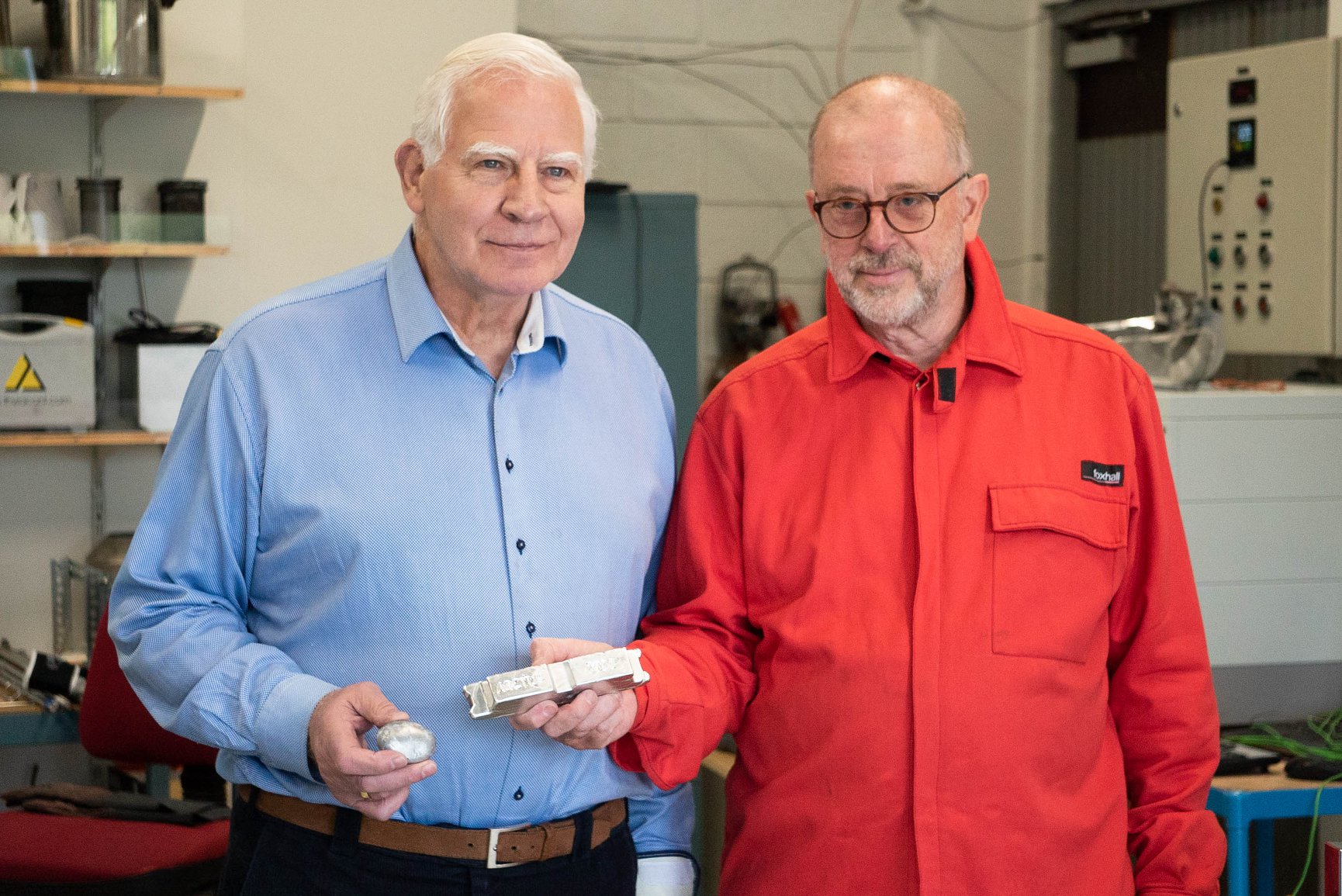 Researchers still need to resolve key technical issues before inert anodes can be used at industrial scale. Mainly, the materials require higher voltages of electricity to make aluminum, which drives up smelters’ electricity use and costs. Companies must design more energy-efficient systems so that low-carbon aluminum doesn’t become too expensive or unappealing for construction companies, beverage can makers, and other major buyers of aluminum.

For the wider aluminum industry, the most pressing concern remains reducing carbon pollution from power plants.

Since 2000, smelters have actually grown more reliant on coal and natural gas for electricity, even as solar projects and wind farms proliferate around the world. Many facilities in the Americas and Europe shuttered in recent years, and a significant share of production shifted to China and countries in the Middle East. The result is a market awash in abundant, relatively cheap aluminum — with which low-carbon alternatives will have to contend.

“The competition on the global scale is really hard,” said Sadoway, who also runs a startup, Boston Metal, that’s developing a carbon-free steelmaking process. Ventures like Elysis, he said, “have a very, very steep hill to climb.”

Expanding low-carbon aluminum use will require companies and governments to take deliberate steps, Sævarsdóttir said. For instance, putting a carbon tax on consumer products would make it more expensive to buy conventionally made aluminum. Such a system could pressure manufacturers to adopt low-carbon technologies and encourage contractors to source more sustainable materials for construction projects. Or corporations could simply follow in Apple’s footsteps and commit to buying products with lower supply-chain emissions.

It’s still unclear how far Apple will go in adopting low-carbon aluminum across its other product lines, or whether producers like Elysis can ultimately scale their technologies beyond the lab (or a single company) and into other industrial facilities. Still, the initiative is an important sign that major companies are willing to invest in greener metals.

“I really approve of what Apple is doing,” Sævarsdóttir said. “This is the way we must go.”