The world enjoyed cleaner air and clearer skies earlier this year as streets and highways largely emptied during coronavirus-related lockdowns. The sharp decline of oil-burning vehicles gave a glimpse into a world without pollution-spewing tailpipes and fewer growling 18-wheelers, school buses, and other large vehicles.

There is suddenly hope those changes can be cemented for the long haul, even as traffic activity resumes. This month, 15 states — including California, New York, Oregon, Pennsylvania — as well as the District of Columbia joined forces to accelerate the electrification of medium- and heavy-duty vehicles. Private investors have poured billions of dollars into startups specializing in all-electric delivery vans, pickup trucks, and SUVs. And despite the pandemic, freight companies and cities have continued pilot-testing electric trucks and purchasing e-buses.

Such steps give a big boost to a sector that’s been slower to electrify than passenger cars, which are generally less expensive and technically complex to make. Interestingly, the push for cleaner, more efficient medium- and heavy-duty vehicles arrives just as the Trump administration weakens federal standards for vehicle emissions and fuel efficiency.

Cleaning up these vehicle classes would have an outsized impact on the climate, experts say. Although trucks and buses comprise just 4 percent of vehicles on the road, they account for nearly 25 percent of total U.S. greenhouse gas emissions from transportation. And they are particularly noxious for the low-income neighborhoods and communities of color that often surround busy trucking corridors, bus depots, distribution hubs, and seaports. Long-term exposure to the soot and smog spewed by these diesel-burning machines threatens people’s health. Recently, Harvard researchers have linked poor air quality to increased death rates from COVID-19.

“Electrifying those fleets can have greater benefits for a lot of people,” said Emily Green, a senior attorney and clean mobility specialist at Conservation Law Foundation — one of a dozen environmental groups suing the Trump administration to stop the rollback of Obama-era clean car rules. “We need to clean up our trucks and buses so they stop poisoning communities.”

Green praised the 15-state electric-truck pact, which she said shows how governors are forging ahead to curb road pollution despite reversals at the federal level. Signees to the July 14 compact agreed that, by 2050, all medium- and heavy-duty vehicles sold within those states’ borders will be fully electric. The states also set an interim goal of having 30 percent of new truck and bus sales be of emissions-free vehicles by 2030. The bipartisan initiative builds on existing efforts to promote electric passenger cars and install public charging stations across Northeastern states and Washington, D.C.

“We cannot afford to miss this opportunity to place clean transportation technology and infrastructure at the center of the nation’s economic recovery,” D.C. Mayor Muriel Bowser said in a statement last week.

While the new memorandum isn’t legally binding, it conveys a sense of urgency to manufacturers and fleet managers, Green said: “It sends a message that electric trucks and buses aren’t just a thing of the future.”

In order for states and private companies to clean up their fleets, automakers will need to produce dramatically more electricity-powered vans, trucks, buses, and big-rigs. And the recent jolt of private investment could help accelerate that production. 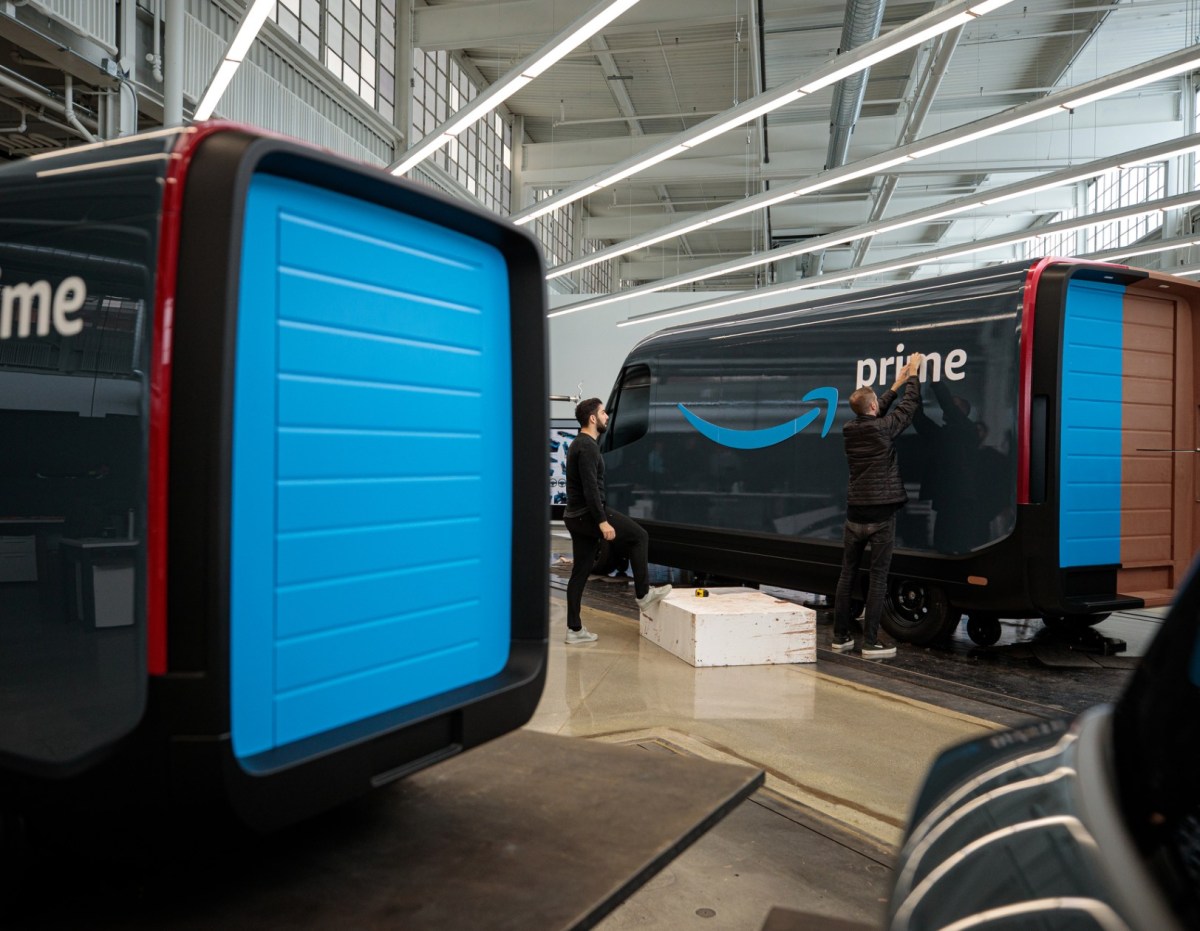 Earlier this month, the electric vehicle manufacturer Rivian raised $2.5 billion ahead of the 2021 launch of its pickup truck and SUV. The Michigan-based company is also building 100,000 electric delivery vans for the e-commerce giant Amazon; the first of the fleet is slated to hit the road next year. Fisker, a startup focused on electric SUVs, reached a $2.9 billion deal to go public following a merger backed by a private equity firm. Tesla competitor Nikola Motors, which is developing electric semi-trucks, saw its stock price soar in June after becoming a publicly traded company. (Last year, Anheuser-Busch — which plans to buy 800 of Nikola’s hydrogen-electric hybrids — completed a “zero-emission beer delivery” in St. Louis.)

Although more than 1 million electric vehicles have sold in the U.S. market since 2011, the vast majority of them are passenger cars.

Globally, more than 500,000 e-buses and nearly 400,000 electric delivery vans and trucks are on the road today, according to the energy research firm BloombergNEF. Yet many of those vehicles are in China, where government policies aimed at boosting manufacturing and improving air quality are driving the industry.

Nikolas Soulopoulos, an analyst for BloombergNEF in London, said that supply has been slow to meet what appears to be a higher demand, especially for vehicles like electric delivery vans. “Having said that,” he added, “things seem to be changing relatively fast.”

A key reason for the lag is that commercial electric vehicles tend to be costly and complicated to build and operate. Tractor-trailers traveling hundreds of miles a day need large batteries or fuel-cell systems to go the distance, but components can eat into cargo space or weigh vehicles down. School buses, garbage trucks, and delivery vans must be able to run their normal routes without making extra stops to recharge batteries. Fleet operators often must install their own charging stations, which requires further investment.

“The largest difference between the commercial vehicle world and the passenger car world is that commercial vehicles are a tool for a job,” said Michael Scheib, head of e-mobility for Daimler Trucks North America. When commercial customers expand their fleets, he said, they also factor in profit margins, total operating costs, and any new protocols for driver training or maintenance.

Expensive lithium-ion batteries have traditionally canceled out the fuel-cost savings of ditching diesel engines. But battery prices — which topped $1,110 per kilowatt-hour in 2010 — have plunged 87 percent to about $156 per kilowatt-hour today, according to BloombergNEF. Analysts project prices will continue to slide in coming years and, in some cases, like within cities, the economics already favor battery-powered delivery vans over their diesel-chugging competitors, Soulopoulos said.

Technology developers are also starting to iron out engineering kinks and operational hurdles with electric commercial vehicles through pilot programs. At the University of Texas at Austin, researchers solved the riddle of a fuel cell-battery hybrid van for UPS, finding components big enough to power a cargo van while still fitting within the brown delivery vehicles. Daimler is currently testing 20 of its eCascadia semi-trucks and 10 of its eM2 medium-duty vehicles — all powered by batteries — in southern California with the trucking firms NFI Industries and Penske. According to news site FreightWaves, NFI helped identify early bugs with the semis, including high-voltage issues in the electrical system that caused some downtime during initial runs.

Daimler will soon add six eCascadias and two eM2s to its prototype fleet, which 14 companies will test in North America. The auto manufacturer wouldn’t disclose specifics about its pre-series models. But as planned, the final eCascadia and eM2 will have a range of up to 250 miles and 230 miles, respectively. Scheib said Daimler plans to start producing a final version of its trucks in late 2021. 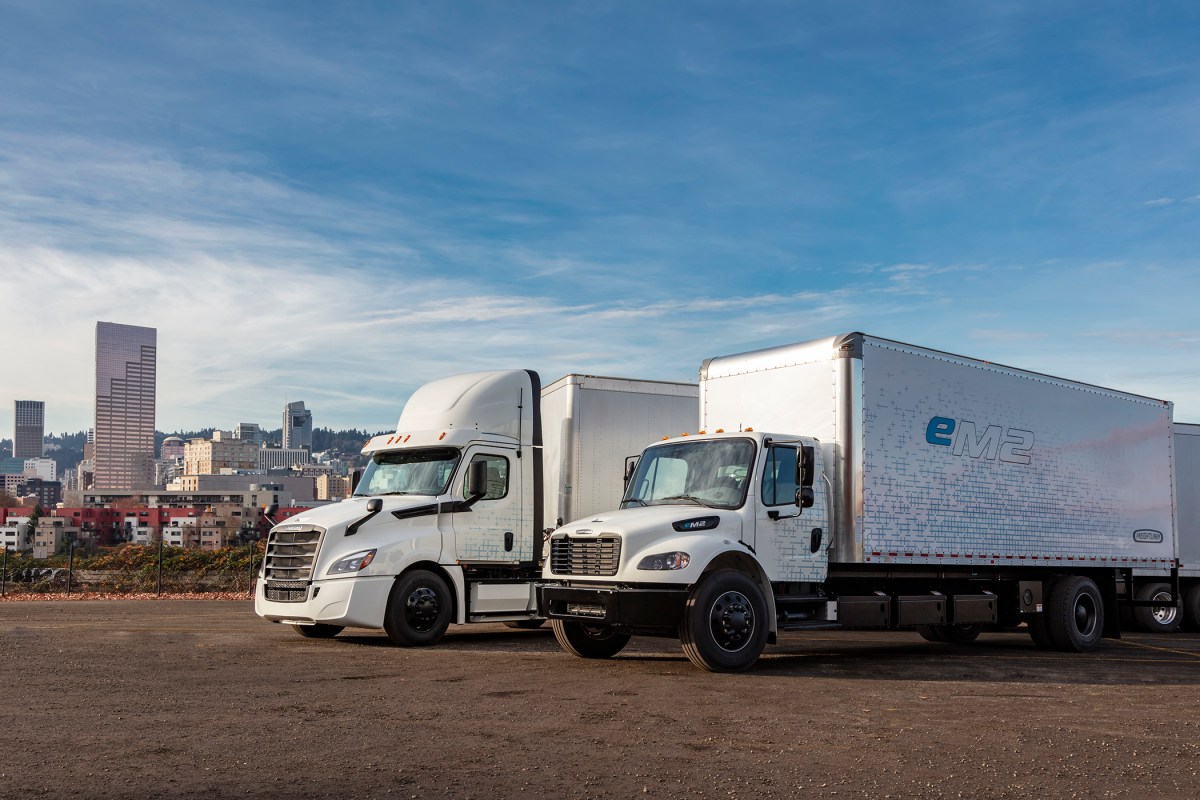 Adoption of electric trucks and cars is expected to drive a sizable dent in road-related pollution. By 2040, BloombergNEF forecasts that about 20 percent of heavy-duty vehicles and 32 percent of medium-duty vehicles sold in the U.S. each year will be powered by batteries or fuel cells — matching similar figures for Europe, China, and Japan. The shift could reduce total carbon dioxide emissions by 2.57 gigatons a year — or roughly one-third of the world’s transportation-related emissions in 2016.

Yet those predictions won’t become reality unless national governments, local leaders, and major corporations adopt stricter fuel-economy standards and sales targets for commercial vehicles, in particular. Conservation Law Foundation’s Green noted that the 15 states pledging to support electric trucks and buses will likewise need to set enforceable regulations to ensure their memorandum is more than “lip service.” Otherwise, she said, “The goals may well fall short of what they need to be for states to actually achieve their climate change objectives.”

While the initiative is a positive step, Green added, “What comes next is even more important.”

This post has been updated to replace the featured image which was originally of a traditional semi manufactured by Daimler Trucks.