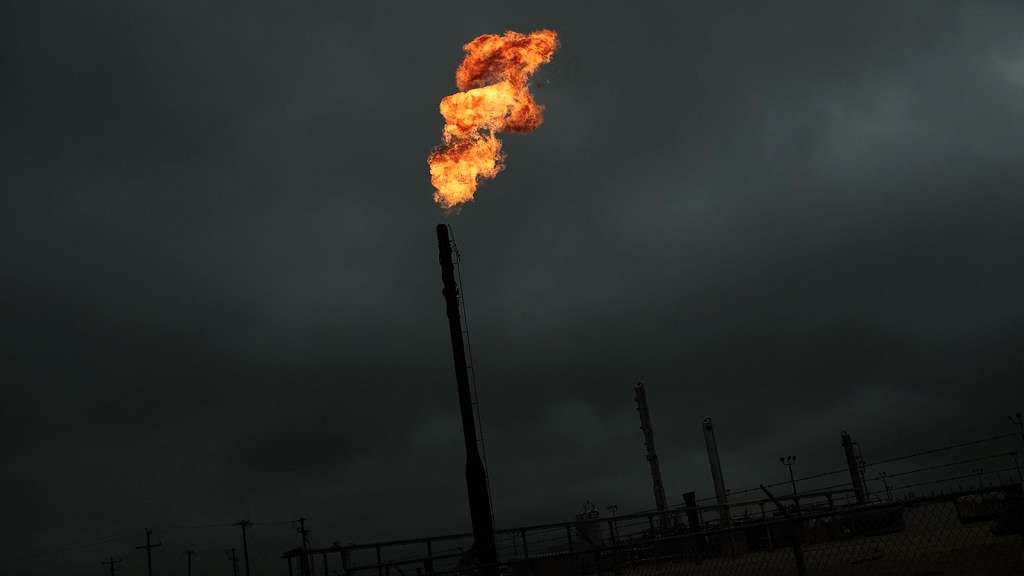 Last year, oil and gas companies in the country’s two largest shale fields either burned off or directly released almost 500 billion cubic feet of natural gas into the air. That figure is more than the total natural gas released nationwide the year prior — and it would be sufficient to heat about 6 million homes for a year, if it hadn’t been wasted.

“Flaring” is the industry term for burning natural gas, and “venting” refers to simply letting the substance escape. Both are wasteful, bad for business, and dangerous for the climate and public health. Methane, a greenhouse gas that is 84 times more potent than carbon dioxide over a 20-year period, is the main component of natural gas. When natural gas is flared, methane is converted to carbon dioxide. But if the flares are unlit or companies vent the natural gas instead, the methane escapes directly into the air.

The oil and gas industry has acknowledged that flaring is a problem. On Tuesday, a group of trade organizations and 40 oil and gas companies in Texas announced a new effort to reduce venting and flaring. The group plans to identify “best practices to minimize methane emissions and flaring” and find ways to improve the data available on the practice. ExxonMobil, Chevron, and other major oil and gas companies have also announced their own plans to cut methane emissions.

Companies either flare or vent natural gas when there aren’t enough pipelines to carry gas to refineries, or when it is prohibitively expensive to do so. When companies drill for oil, they often find natural gas along with crude. Of the two, oil is a more lucrative product, and when pipeline space for natural gas is limited, it’s cheaper for companies to flare or vent the gas than it is to find alternative ways to capture and sell it.

With oil prices hitting 18-year lows, industry-wide layoffs, and projections that operators are likely to halt new infrastructure investments and drastically scale back production, both opportunities and pitfalls await companies trying to reduce emissions from oilfields. On the one hand, low prices and the oil glut are expected to push companies to slash production, simultaneously driving down flaring.

But those gains may be short lived. When oil prices eventually rise and operators rush to drill new wells, energy experts expect that flaring will likely spike again. Additionally, if low prices are sustained for long periods of time, more companies are expected to either go bankrupt or begin tightening their belts, which could mean fewer resources to monitor flares and fix faulty equipment that may be leaking natural gas into the atmosphere.

Due to the current downturn, companies may delay pipeline projects. Oil companies have already announced cutting back capital expenditures by $40 billion for the remainder of the year. If pipeline projects are put on hold, it may worsen the bottleneck in oil and gas fields when prices eventually rise and operators begin ramping up production — meaning that natural gas may ultimately be more likely to be flared or vented rather than diverted to a pipeline.

If operators delay pipeline projects, “you get behind the curve again,” said Lynn Helms, director of the North Dakota Department of Mineral Resources, in a monthly update in March. “In the long term, it creates even bigger problems as you come out of low oil prices.”

Availability of pipeline capacity also doesn’t guarantee a decrease in flaring. In some cases, companies may choose to flare natural gas because it’s more costly to pay to transport it to market. Last year, Williams, a pipeline operator, sued Texas regulators after they allowed a natural gas company to flare gas even though existing pipelines would’ve allowed the company to move it to market.

“Connecting to Williams’ pipeline would be uneconomic,” Exco Resources, the natural gas company, said in a court filing. Without a permit to flare, the company would have to stop operating 138 wells, which would result “in a waste” of oil and gas, the company stated.

Wilson, the environmental advocate, worries that as oil and gas companies lay off workers and try to implement social distancing rules, the number of unlit flares and tanks venting gas will skyrocket. Natural gas is not visible to the naked eye, but for the past few years Wilson has been documenting natural gas leaks and vents in Texas oilfields, particularly the Permian basin, with a sophisticated infrared imaging camera. She has also been systematically tracking unlit flares and said that about a third of all flare stacks she visited this year have been unlit, compared to just 14 percent in 2017.

Regulators don’t track unlit flares and venting tanks remotely and rely on inspectors conducting field investigations to identify them. Given that many state agencies have asked their employees to work from home and have halted fieldwork, enforcement activity on the ground will be limited in the coming months. Additionally, the Environmental Protection Agency and a number of state regulators have announced in the past few weeks that they’re suspending enforcement of environmental laws due to the pandemic crisis.

Flaring has become a major concern not just for environmental advocates and public health experts, but also for the oil and gas industry itself. Last year, Pioneer Natural Resources CEO Scott Sheffield called flaring a “black eye” for the industry. He has since advocated for divesting from companies that have high rates of flaring. Other industry leaders have also called on states and the federal government to put more stringent limits on flaring and incentivize companies to cut carbon emissions.

Last month, news broke that Texas regulators were considering capping oil production in an effort to bolster prices. So far, other states don’t appear willing to follow Texas’s lead, but the circumstances may change if low oil prices don’t improve. Coordinated production cuts could provide a unique opportunity to tackle the flaring problem.

Kinnan Golemon, an oil and gas lobbyist in Austin, Texas, theorized that there are multiple ways to go about reducing flaring while capping oil production. Texas regulators could restrict companies without pipeline access from extracting oil and gas, or they could target operators who flare the most, he said. “It would obviously impact smaller independent operators more so than larger entities, [since] most of the larger production wells are tied to pipelines,” he added.

Colin Leyden, a senior manager at the Environmental Defense Fund, a nonprofit that has been closely tracking the rise of flaring, said that reducing flaring while slowing down overall production is “a win-win.”