As the coronavirus outbreak rages on, renewable energy is taking a hit. Factory shutdowns in China have disrupted global supply chains for wind turbines and solar panels, with consequences for clean energy progress this year around the world.

The spread of COVID-19, now declared a pandemic by the World Health Organization, is expected to slow solar energy’s rate of growth for the first time since the 1980s. On Monday, two major solar panel manufacturers that supply the U.S. utility market, JinkoSolar Holding Co. and Canadian Solar Inc., both saw their stock prices fall by double digits. Bloomberg New Energy Finance, a research firm, previously predicted that global solar energy capacity would grow by 121 to 152 gigawatts this year, but on Friday, the group issued a new report dialing back its prediction to just 108 to 143 Gigawatts. 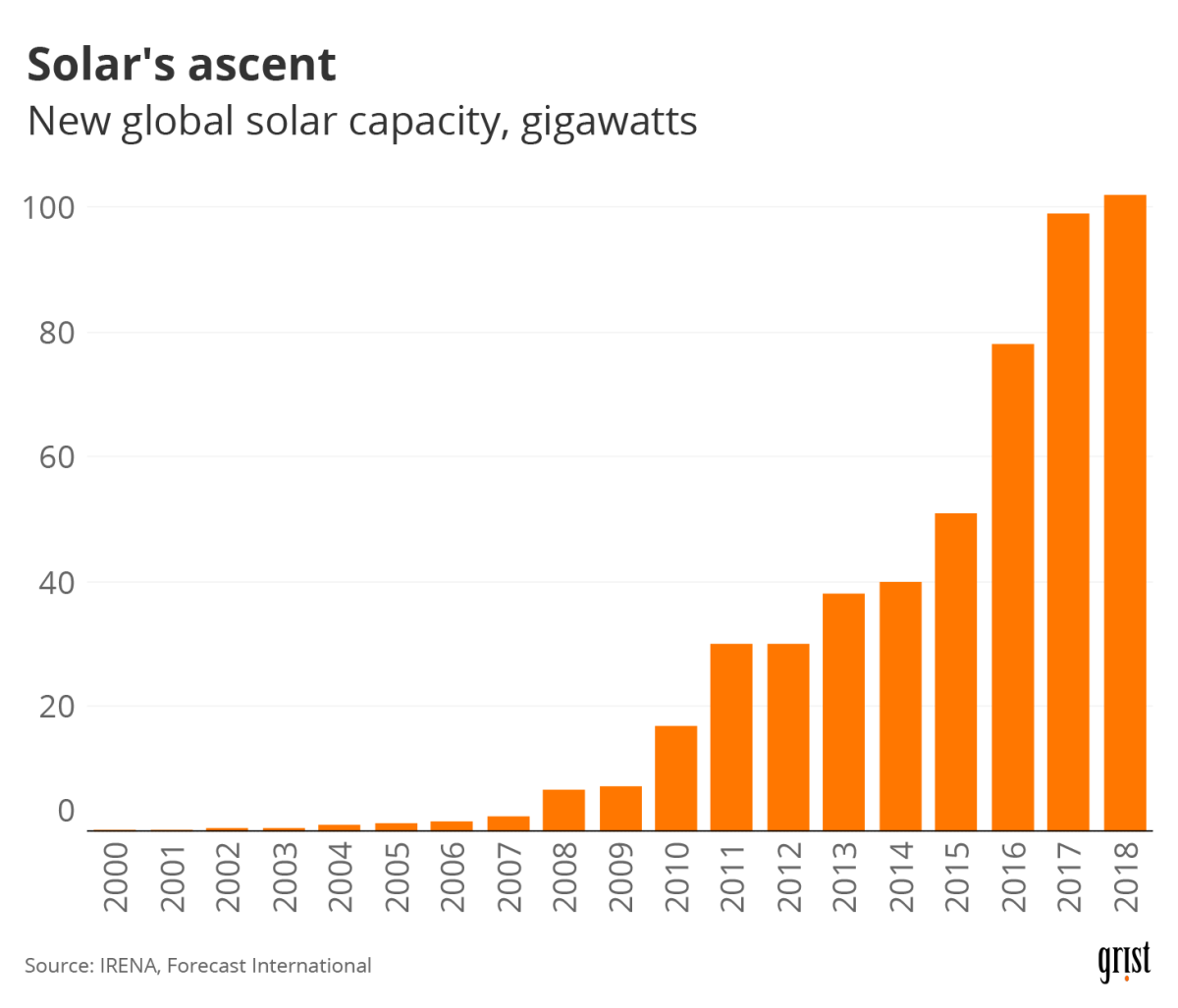 Solar’s rate of growth has been increasing for decades. Clayton Aldern / Grist

Disruption in supply is only part of the equation. The new report predicts that as policymakers and businesses focus on short-term stimulus packages to help the economy, energy infrastructure investments and planning will temporarily go by the wayside. This has already happened in Germany, where a scheduled government meeting to resolve questions over the future of renewable energy on Thursday was used instead to plan for the coronavirus. According to the Bloomberg analysis, these trends will slow battery demand and result in lower-than-expected returns on investments in wind.

In the U.S., the utility-scale wind and solar markets are dealing with uncertainty in their supply chains. Utility-scale wind developers have received “force majeure” notices from wind turbine suppliers in Asia who cannot fulfill their contract obligations in time. The term refers to a common clause in contracts that gives companies some leeway in the case of extreme disruptions, like wars, natural disasters, and pandemics. The delay jeopardizes wind projects that were banking on taking advantage of the wind production tax credit, which expires at the end of this year.

Meanwhile, major U.S. solar developers that can’t get their hands on enough panels are issuing their own “force majeure” notices to utilities. Invenergy and NextEra Energy, the developers of the first two utility-scale solar farms in the state of Wisconsin, both cited the clause in late February and warned of delays to the projects. Now NextEra claims its 150 megawatt solar farm is back on track, while Invenergy’s 300 megawatt project is still up in the air.

“I think you’re going to see a lot of force majeure claims under the coronavirus, up and down the supply chain,” Sheldon Kimber, CEO and co-founder of utility-scale clean energy developer Intersect Power, told Greentech Media.

Factories in China are reportedly starting up operations again, but the ripple effects of the short-term disruption strengthen the case for local manufacturing of renewable energy equipment, according to the Bloomberg analysis. If there’s any silver lining in this story, it’s that governments may now have an opportunity to do just that. Fatih Birol, Executive Director of the International Energy Agency, encouraged governments that are planning stimulus packages in the wake of the pandemic to prioritize green investments and capitalize on the downturn in oil prices to phase out fossil fuels.

“We have an important window of opportunity,” Birol told the Guardian. “We should not allow today’s crisis to compromise the clean energy transition.”