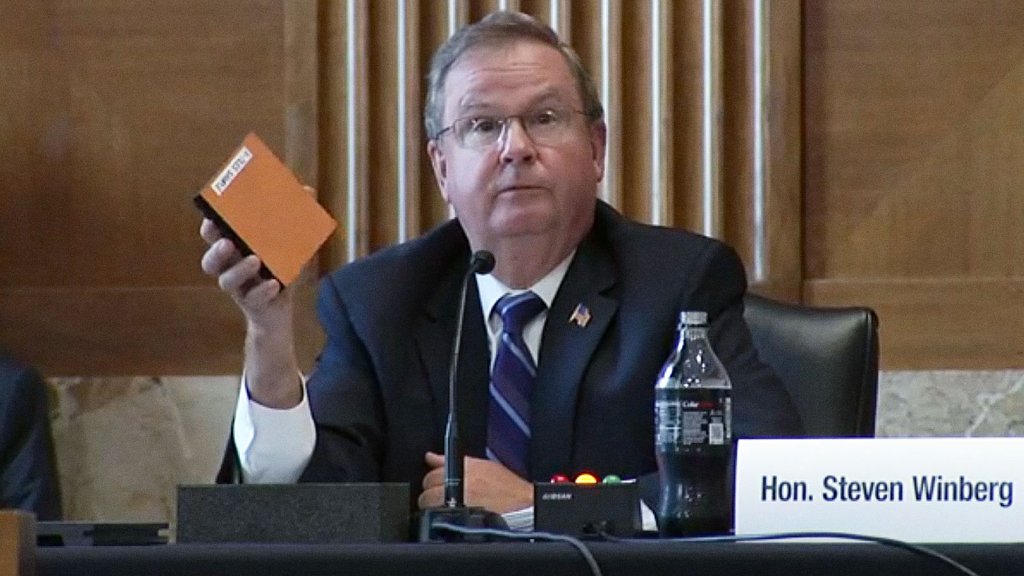 Coal is on its way out when it comes to electricity generation. But at least one Trump administration official has some creative ideas for how to keep it in our lives. According to Steven Winberg, the assistant secretary of fossil energy at the Department of Energy, coal could be used to manufacture ceramic tiles and backyard decks. Precious metals extracted from toxic coal ash could be used to make iPhones and other gadgets. At the annual meeting of the American Legislative Exchange Council (ALEC) last month, Winberg touted this “wide range of products” as the future of coal in a presentation.

“Many people think coal’s time is over,” he said. “I don’t think that way.… Rather than using the heating value of coal, we can use the carbon value of coal.”

ALEC is a membership organization for state lawmakers and industry representatives that’s known for providing model legislation with a distinctly conservative bent. Its recent efforts include watering down fracking regulations and further criminalizing anti-pipeline protests. The organization does not disclose its members, and its annual meeting is shrouded in secrecy. This year, due to the pandemic, the meeting took place over Zoom. A verbatim record of Winberg’s comments to lawmakers on ALEC’s Energy, Environment, and Agriculture task force was provided to Grist by the Center for Media and Democracy, a nonprofit government watchdog group that tracks ALEC’s initiatives.

Winberg’s wide-ranging comments highlighted his department’s efforts to ensure the continued use of coal, oil, and natural gas through its Coal FIRST program, funding of technologies that capture carbon before it’s emitted, and support for the use of natural gas to produce hydrogen (a potential clean energy source).

“My personal view,” he said, “is that it is too early in this effort to go to zero or near-zero emission technologies and write off fossil energy and take them out of the picture, because there are technological advances that are being done — [carbon capture] for example — that will make fossil energy technologies as clean, and maybe in some cases cleaner, than what you get from renewables.”

About two weeks after the ALEC meeting, Winberg made similar comments before the Senate Committee on Energy and Natural Resources, where he held up samples of coal-based carbon foam, decking material, and roofing tile for lawmakers to view. “Can you imagine building a house that is fire-proof with coal?” he said. “That will be reality in the not-too-distant future.”

Four years into the Trump presidency, such comments might come as no surprise. The Trump administration has repeatedly tried to bolster the coal industry through various regulatory rollbacks. The administration is also promoting the use of carbon capture technology at coal plants, which could extend the viability of the dying industry by helping it meet certain emissions standards.

Climate scientists agree that carbon capture is crucial to mitigate global warming. But even if carbon emissions from burning fossil fuels are efficiently captured and stored, the Trump administration’s plans for coal, oil, and gas do not address the detrimental environmental and public health effects caused by their extraction and transport. Often these downsides are felt most acutely by communities of color and the poor.

Winberg, who was nominated to his position by President Trump in 2017, previously headed research at Consol Energy, an energy company with coal and natural gas assets. The Coal FIRST program, an effort to “make coal-fired power plants in the future more adaptive to the modern electrical grid,” was among Winberg’s earliest initiatives after being appointed to the Department of Energy. This year the agency announced more than $173 million in funding for carbon-neutral coal plant designs and technology for extracting hydrogen from coal, biomass, and plastic waste.

During his presentation to ALEC, Winberg also spoke at considerable length about the role that he expects hydrogen to play in supporting coal and natural gas. Hydrogen is a potential source of clean energy that can be used to fuel cars, heat homes, and run industrial plants. But at the moment, the vast majority of hydrogen is produced from natural gas through a process that emits carbon dioxide, partially mitigating the climate benefits of the “clean” energy source. Winberg appears to be pinning his hopes on being able to use carbon capture to sequester these emissions and create a truly clean source of hydrogen.

As of now, that vision appears remote. For one, the clean car market is currently dominated by electric vehicles, and hydrogen-fueled cars are a rarity. Additionally, the technology that captures carbon dioxide emissions from smokestacks is not yet financially viable, meaning the production of hydrogen is likely to keep contributing to global warming in the near term. In fact, the country’s only operational coal plant outfitted with carbon capture was shut down earlier this year after becoming economically unviable.

Nevertheless, Winberg told lawmakers, lobbyists, and other attendees at the ALEC meeting that the efforts of government and industry “are very close” to making carbon capture economically viable. He also said that an Internal Revenue Service proposal to give a tax credit to companies using carbon capture would help speed up adoption of the practice.

“What I’ve told people since the day that I arrived here is, if you can make a business case out of [carbon capture], then the government can get out of the way and let industry and [the] private sector do what it does best,” he said. “And that’s: innovate and commercialize technology.”

Julio Friedmann, an expert on carbon capture who served as the deputy assistant secretary for fossil energy during the Obama administration, reviewed Winberg’s remarks and declined to comment on the Trump administration’s policies regarding coal. However, he did challenge the assertion that climate change can be tackled without prioritizing net-zero emissions, as Winberg seemed to suggest.

“If we take any carbon from the earth in any form, net-zero math requires we can’t emit it and must return it,” he said. “Less fossil fuel use makes that math easier.”

On climate change, Winberg displayed more candor at the ALEC meeting than he did in his Senate testimony. While he did not directly address how his department’s work would help tackle the climate crisis, he did obliquely reference the Trump administration’s reputation for climate denial by insisting that nobody has discouraged his work on carbon capture or other emissions-reduction technologies.

“Not one person in the administration has told me to stop working on these technologies,” he said. “In fact, quite the opposite: I’ve been encouraged to step up on this.”