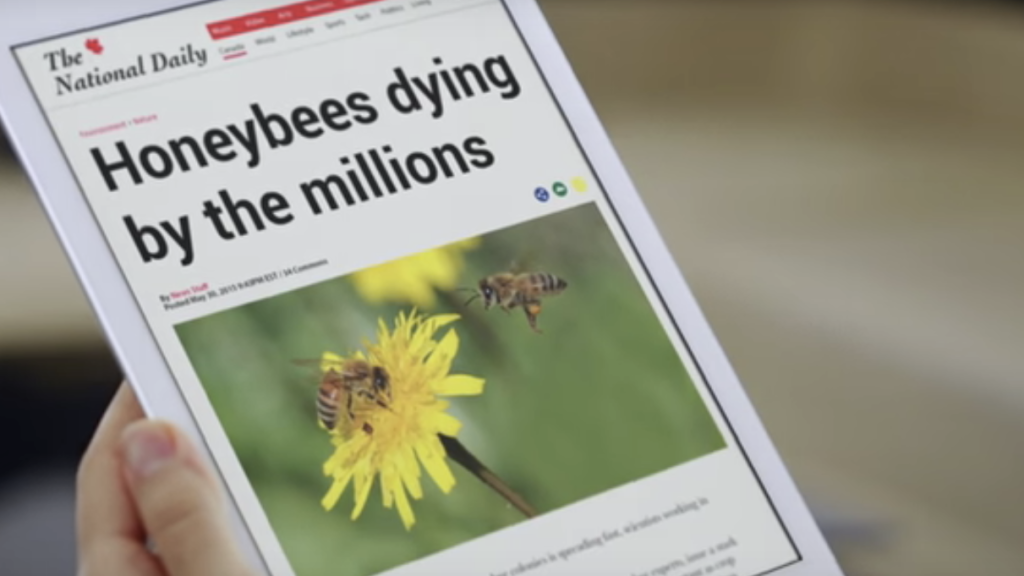 Canadians heading to the supermarket this weekend to restock their Honey Nut Cheerios supply might be confused to find that Buzz, the most beloved of all cereal box mascots (suck it, Tony), is mysteriously missing.

General Mills has relieved the jolly honeybee from its advertising duties in Canada, Ad Week reports, and is encouraging Canadians to collectively plant 35 million flowers in an effort to raise awareness of declining bee populations. The campaign has caused a riff between General Mills and Buzz, who in an interview with Grist pointed out that he shouldn’t have to take the hit for something that a) is mostly our fault, b) really affects wild pollinators, and c) when it comes to domesticated bees, things are nowhere near as apocalyptic as everyone says. But first, from Ad Week:

“This is the first time in the brand’s history that we’ve taken ‘Buzz’ off the box,” said Emma Eriksson, director of Marketing for General Mills Canada. “One-third of the foods we depend on for our survival are made possible by the natural pollination work that bees provide. With ongoing losses in bee populations being reported across Canada, we wanted to leverage our packaging to draw attention to this important cause and issue a call to action to Canadians to help plant 35 million wildflowers — one for every person in Canada.”

The sappy montage of humans saving animals, which is one Sarah McLachlan song away from being completely unwatchable, claims that “Helping is in our nature” — a statement that, according to this, this, and this, is laughably untrue.

We caught up with Buzz at his home in upstate New York, where he lives with his wife BeeBee and their three kids: Nectar, Bumble, and Sting. Below is an edited and condensed version of our conversation.

Q. So have you seen the new ad?

A. No — I refuse to watch it. But my kids? They love it. I mean, show a baby elephant reuniting with its mom in a freaking auto insurance commercial, and the kids’ll love it.

Q. I thought you said you hadn’t seen it?

Q. Right. So do you think it’ll make a difference? Get people to care about the pollinator crisis?

A. Doesn’t matter. All that General Mills really cares about is selling cereal, and that’s all that shareholders want them to care about. If taking me off the boxes happens gets people to care about bee health, then whoop-de-freakin-do, but truth is: It’s all about advertising. It’s all about getting people to keep scarfing bowls of diabetes and heart disease.

Q. You’re still employed by General Mills. Couldn’t you get in trouble for saying stuff like that?

A. Listen, I’ve been working for Honey Nut since the ’80s. I’ve had a good long run. And if they wanna treat me with such disrespect after I’ve done so much for them, then screw ’em. I’ll go work for some advocacy organization — you know, someone who actually cares about the pesticides, habitat loss, and stressful working conditions causing this problem.

Q. You sound pretty ready to move on.

A. You know, I was talking to Winnie —

A. The Pooh, yeah. We go way back. Did a commercial together in the late ’80s and still get together now and then with the kids. Anyway, Winnie called me as soon as the news broke that I was off the boxes. I was still livid and started ranting about the new campaign, when the damn bear burst out laughing! I was speechless, didn’t get what was so funny, but then Winnie explained the irony in a bunch of humans throwing me under the bus, only to immediately turn around and tell everyone else to “save the bees!” Ha! Who’s gonna save this bee, huh? I got three mouths to feed at home.

Q. You must have some money tucked away after all these years.

A. Some, yeah. But truth be told, I blew a lot of it on drugs in the early days — organophosphates, neonics, any pesticides I could get my hands on, really. I owe my life to BeeBee. She whipped me into shape back then, gave me a fresh start. So maybe it’s just time for another fresh start.