Can cheaper corn change the way we farm? 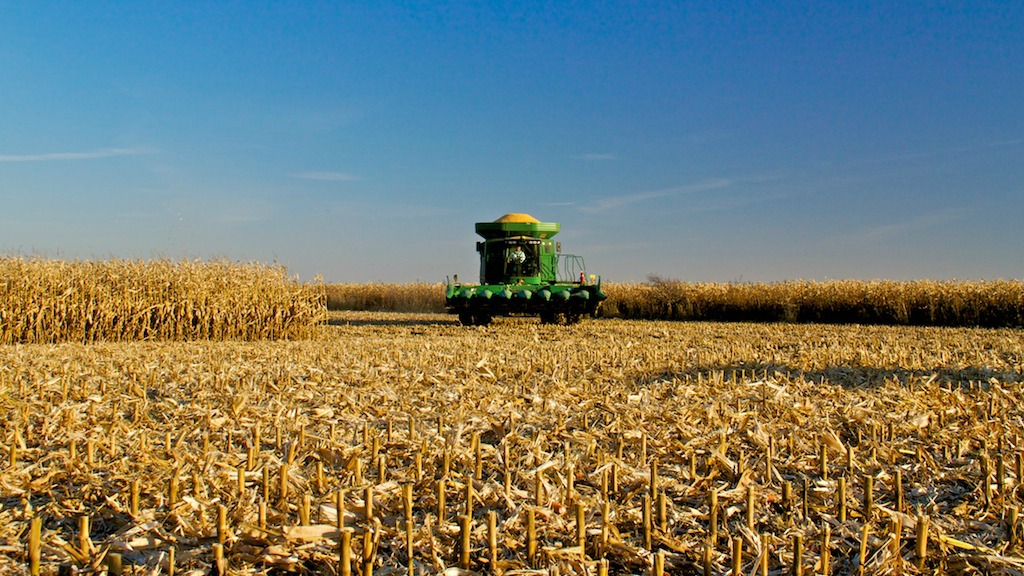 Can cheaper corn change the way we farm?

America has too much corn. Year after year of farmers responding to incentives to grow more of America’s largest crop has resulted in a glut of the commodity. With high supply and slackening demand, prices have fallen dramatically since the corn gold rush sparked in 2007. But will low prices actually encourage farmers to plant a greater variety of crops or put land aside for conservation?

Corn planting is down by 1.4 million acres from 2014 and a good chunk of that was likely replaced by soy, which is up by 934,000 acres, according to projections from the U.S. Department of Agriculture’s recent prospective plantings report. That leaves nearly half a million acres of former corn land unaccounted for.

Tim Slepicka, who farms 460 acres of corn and soybeans near Maple Park, Ill., is putting that assertion into action. After the experimental addition of one acre of pumpkins earned a $5,000 gross, he’s now including more acres of pumpkins  in his traditional rotation, which also includes sweet corn and cucumbers.

Mid-sized operations like Slepicka’s do encounter headwinds in diversifying. The commodity crop industry has a laser focus on helping corn and soybean farmers efficiently and consistently maximize yields while identifying markets. “It’s absolutely perfected to a science. There are apps for your phone that compares price at market with input price,” Slepicka said. And when it comes time to sell those crops, “it’s like a drop of water in the Mississippi — you put it out there and it’s gone,” he said.

That’s just not the case with crops like pumpkins. “If I scale up my pumpkins to 40 acres,” Slepicka said, “what if there’s a glut in the pumpkin market and there’s not the price support programs there like there are for corn and soybeans?”

So are mid-size farmers willing to take on the risk that comes with a potential payout? Anecdotally, National Sustainable Agriculture Policy Director Ferd Hoefner said that mid-sized farms tend to be more diverse than mega farms, though he cautioned there’s little data to back it up.

“In order to make it work at mid size, and you don’t have the capacity to compete at scale. You have to have some sort of market niche, be it diversity, organic, or something else,” Hoefner pointed out.

“It’s a truism of sustainable agriculture that diversification is an economic and environmental benefit,” he added.

Considering the land-use change that occurred across the Corn Belt during the last seven years, any element of added diversity could qualify as a good thing.

“If you want to look at habitat loss, you have to look at the 12 million acres we’ve pulled out of the Conservation Reserve Program,” said Scott Irwin, University of Illinois professor of agriculture and consumer economics.

Starting in 2007, conservation payments from Uncle Sam couldn’t compete with high prices for corn and soy that made even marginal land look attractive to farmers riding commodity agriculture’s bruising boom/bust cycle. The increased demand for grains — driven by corn ethanol mandates and global meat consumption — resulted in a swift and dramatic land conversion as farmers exited CRP. The environmental consequences range from increased water pollution to soil erosion to a significant release of stored carbon. Wildlife and biodiversity in particular have suffered across the Corn Belt from converting varied fauna and topography into commodity row crops.

“High crop prices were behind it, and during this time we saw a significant expansion of cropland into natural ecosystems and lands that hadn’t been previously cropped,” University of Wisconsin researcher Tyler  Lark said of his recent research into the issue. (The ethanol industry disputes this despite corroborating research and on the ground accounts.)

“We certainly expect a slower corn price to expect less land conversion, so in that sense, there could be a payoff for the environment,” said Lark.

OK — would the benefit be quantifiable?

“At this point, I wouldn’t want to make that argument because even with 89.2 million corn acres for this year, before the recent boom hit, corn acres were running between 78-81 million acres planted,” University of Illinois’ Irwin said.

So while the slowdown in conversion is good, and we’re headed in the right direction, there is little evidence to suggest even a modest impact on the environment from low prices alone. There are, however, potentially hundreds of thousands of marginal acres that were once in CRP that were planted during the boom, but are now sitting idle because they aren’t as productive. What about these orphan acres that aren’t in a conservation program, but aren’t being farmed either?

“It will just go into pasture or be unfarmed. And that would be beneficial from a habitat standpoint,” said Irwin.

How do we resolve this tension between price and the environment? When prices go up again, those orphan acres will be the first to see the plow. Targeting federal policies seems to be the first order of business.

“If you focus on the grasslands in the upper Midwest, you focus on reforming the crop insurance program,” said ISU’s Babcock.

And when it comes to diversifying farms, a key improvement was added into the latest farm bill. As Grist’s science editor Amelia Urry wrote on Monday, “Now diversified, mixed-crop farms can insure their whole operation without the hassle of buying insurance for a bunch of different crops and livestock separately.”

NSAC’s Hoefner thinks whole farm insurance will especially benefit mid-sized farm operations. Roughly 1,000 farms have enrolled in the program’s first year. “Our hope is that the highly diversified mid-scale operations continue to enroll. Smaller farms have better options through the Farm Service Association, but the next tier of diversified operations that may grow big commodities but also have vegetables and livestock will really benefit.”

Mike Blaalid of the conservation nonprofit Pheasants Forever believes tweaking CRP to make it more viable as a long-term slice of an operation is a good path forward. By allowing managed haying and grazing of conservation land, farmers could earn enough money to make plowing it up unattractive and thus keeping it intact past current 10-year contracts.

“Conservation does pay. You can make money doing good things on the land and make money from farming,” Blaalid said.

Others do it because it’s the right thing to do. “My dad never wanted to plant fencerow to fencerow. We have CRP land but we didn’t take anything out of the program because the land is marginal with trees and wouldn’t make much dent in the bottom line. I’d rather have the trees and grass then the short-term payout,” Slepicka said.