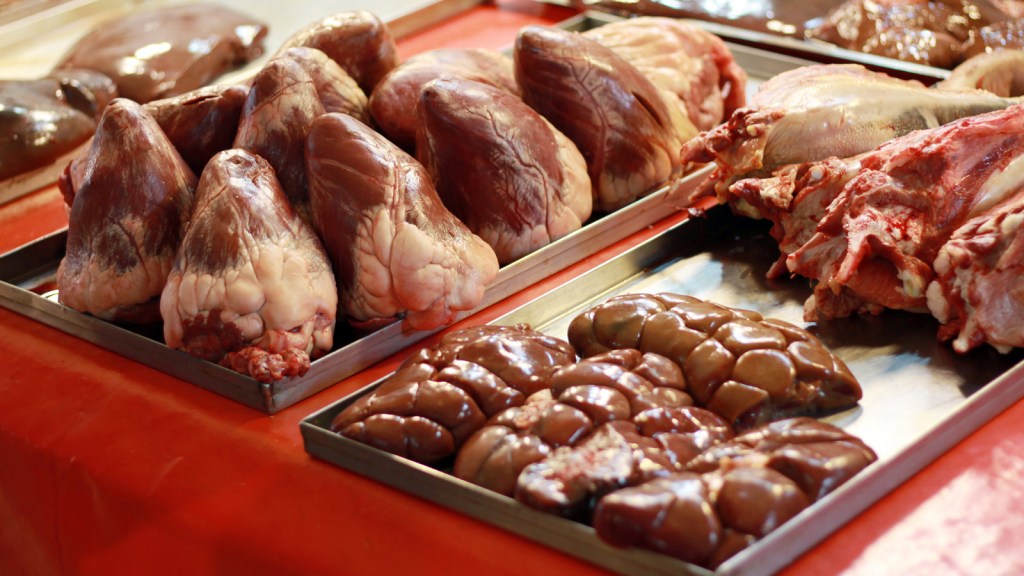 Q. A lot of people eat less meat as a way of decreasing their carbon footprints. It’s well-studied that some animals (e.g. beef) have a larger footprint than others, but I’ve wondered if different cuts of an animal also have differing impacts. Is cattle demand affected by demand for tongue, bones, and other less desirable parts, or is it mostly driven by demand for steak? Does demand for chicken gizzards increase the number of broiler chickens raised, and if not, would it then be a carbon-neutral food?

Sweetbreads. Tripe. Chitterlings. Rind. Bung. What do all these exotic-sounding words have in common? They’re all types of edible meat products, and all unlikely to be found on the average American’s dinner plate. Collectively known as offal, variety meats, or my personal favorite, quinto quarto or fifth quarter (ah, those musically tongued Italians), this category basically includes all the other parts of an animal beyond the steaks, chops, and breasts we know so well: lips, ears, intestines, hearts, lungs, the whole bit. Still with me? Good — I know that sort of snack can be a tad difficult to stomach for our picky American palates.

Taste preferences aside, there’s no question that around here, variety meats are considered much less desirable than the prime cuts. So your question is an intriguing one, Tim: Would choosing such meats result in fewer overall animals being raised and killed for food — and therefore, be a more sustainable culinary choice? Let me add a little something more to the plate, too: Might choosing such meats ultimately result in less food waste, and therefore be more sustainable?

As with all meat-related queries, this is a complicated matter, and one that could quickly get bogged down in terms like “carcass cutout values” and “dollars per hundredweight.” So let’s take a big-picture view here. You might fear that any leftover parts from a butchered cow or pig — the chitterlings, tripe, and everything else that remains after the prime cuts are sold — will be thrown away if someone like you doesn’t buckle up and eat them. Then, the market will move on to the next cow or pig, take only the sirloins, ribeyes, and other in-demand cuts, and repeat. But there actually is a large market for these variety meats: the rest of the world.

In places like Japan, Mexico, South Korea, Russia, and Egypt, people happily chow down on a much wider variety of cuts than we tend to in this country, whipping up specialties like barbecued liver, beef feet soup, and tripe stews. So, naturally, we export the stuff, which significantly fattens up the bottom line for ranchers and other meat producers. What we don’t export, we use in treats like — yes, the rumors are true — hot dogs and sausages. And what we don’t eat, we send to rendering plants to be transformed into gelatin, animal feed, soap, lard, and cosmetic ingredients. So those less-common (to us) meat products do have their fans, and typically end up being put to use. A sharp increase in domestic demand for offal wouldn’t necessarily reduce the number of animals raised for food — it would likely just shift the buyers around a little (and perhaps cut down on food miles somewhat).

Where expanding your meat-eating repertoire can make a difference, Ian, is with small, local butchers. As an eco-conscious carnivore, you can’t do much better than a carefully curated neighborhood butcher shop: Such outfits often partner with nearby farms and ranches raising free-range, grass-fed, and/or organic meats. By shopping this way, you’re supporting local producers and making more sustainable agricultural practices viable. Hey, you can often even visit the farms from whence came your beef!

But when you add in your willingness to try more adventurous dining, things get even better. “Small producers generally do not have access to an export market, and as such typically end up swimming in offal and less-popular cuts,” says Andrew Lindberg, a chef and nose-to-tail butcher with Maine’s MeatME & Giant’s Belly Education. “There are only so many pork liver pates you can get your kids to eat, and after that a lot of those parts end up in the compost pile … Eating local offal is not going to reduce the number of animals raised, but it is a winning strategy to reduce waste.”

You don’t even need to try the most wild-sounding meats to make a difference, points out Rob Levitt of Chicago’s Butcher & Larder, a whole-animal butcher shop: “A farmer can’t just raise a pork chop. The pork chops are 10, 12 percent of the animal. Hopefully that makes people willing to look elsewhere on the animal. But it doesn’t have to be offal, and it doesn’t have to be daunting cuts. The same result can be achieved by buying more approachable cuts of meat that you just haven’t heard of” — like pork sirloin, or the unattractively named but apparently delicious flap meat. Even regular old ground meat is a great choice, if you know the source — and does it get any less intimidating than a burger?

All in all, Tim, eating meat more conscientiously — and less of it — is still a great idea. And if you can shift your consumption away from T-bones and toward, say, chitterlings stew, you will feel like you have a real steak in the future of our food system.