Americans are soon going to be eating a lot less meat — just not in the way environmentalists had hoped that would happen. Coronavirus has shuttered so many meatpacking plants around the country that the number of cattle and pigs slaughtered every day is down 40 percent. Farmers are euthanizing pigs by the thousand and trucking the meat to landfills to rot.

“The food supply chain is breaking,” wrote John Tyson, chairman of Tyson Foods Inc. in a full-page that ran in major newspapers on Sunday.

As far as his business is concerned, Tyson is right: The meat industry has never experienced a crisis like this before. It’s likely to lead to many long term changes: more scrutiny of the industry’s consolidation, more support for smaller meat companies, and a renewed push for mechanization. In the short term, it means two things: scarcity and higher prices.

“It’s going to cause price spikes somewhere downstream,” said Rich Sexton, an agricultural economist at the University of California, Davis. But the average shopper might only notice empty shelves rather than higher prices, because “big grocery chains don’t like to jack up prices, especially in times like this.”

By the last week of April, some 16 plants had been shut down. In response, President Donald Trump issued an executive order Tuesday to reopen meatpacking plants, provoking protests from unions and Democratic politicians who say that the order doesn’t do enough to protect workers from getting infected. “We are really putting workers in grave danger today,” said Representative Rosa DeLauro from Connecticut at a press conference on Tuesday. At least 20 meat-processing workers have died from coronavirus so far.

It’s all frightening enough that very serious people are warning of a collapse that could end in food riots. So is it time to panic-buy for real? How could we protect the people risking their lives to produce food? And could this crisis wind up breaking the grip of the few companies that control most of meat processing in America? Here’s our explainer for anyone who wants to get beyond their reflexive Trump-fury and search for solutions.

Would people starve if the meatpacking plants stayed closed?

After Trump announced his order, Senator Chuck Grassley of Iowa tweeted that “society is 9 meals away from food riots.” But, no, there are still plenty of calories to go around — even with farmers dumping mountains of potatoes and oceans of milk. Meatpacking plants are not an existential necessity, because humans survive primarily on grains; we are more seed eaters than beef eaters. The supply chains delivering bread, pasta, and rice are still working well because they rely on machines rather than virus-vulnerable human labor. And much more food is in storage.

“There’s still enough food, but it might not be what we wanted,” said Jayson Lusk, food economist at Purdue University.

What’s the argument for keeping these plants open?

Keeping even a few of the biggest meatpacking plants closed for more than a month could cripple every food business and farmer connected to them. And they are connected to almost everyone. The meat industry is shaped like an hourglass, with farmers at one end, eaters at the other, and a few enormous packing plants at the chokepoint. For example, just 15 slaughterhouses kill 60 percent of the pigs in America. 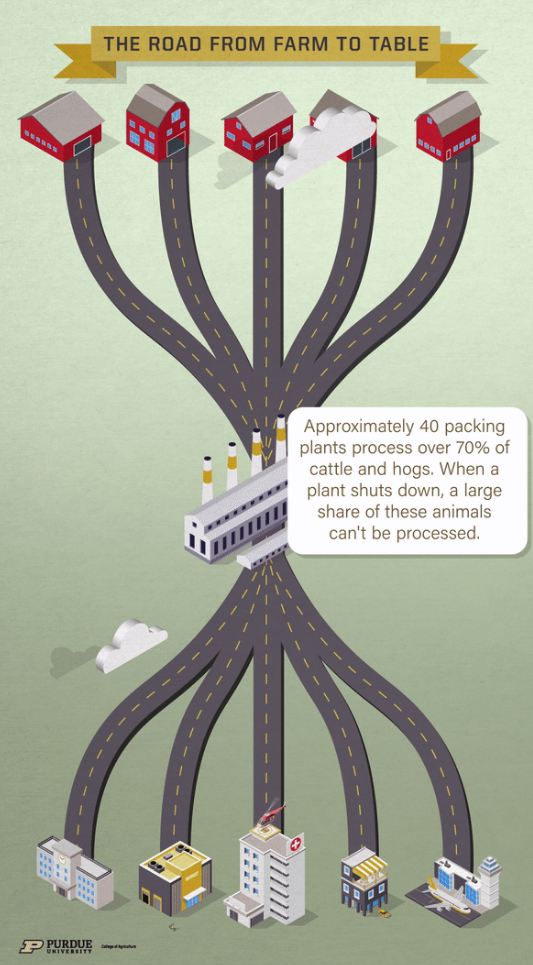 So the economists I talked to said it only made sense to find a way to get the plants running again as soon as possible.

Farmers are scrambling to find smaller slaughterhouses and meat packers, and those smaller businesses are benefiting, said Nelson Gaydos of the American Association of Meat Processors, which represents these smaller companies. “A lot of people are saying it’s like Christmas on steroids,” he said.

But the big boys are so enormous that the small- and medium-sized meat companies can’t make up for their losses. Imagine you ran a small slaughterhouse that killed 200 pigs a day from local farmers: That might sound like a lot, but you’d have to do that for 100 days to provide as much pork as one of the big plants butcher in a single day (Lusk did the math in a blog post).

Can the plants reopen safely this soon?

It’s tough to tell. Companies are giving workers masks, having them stand six feet apart, and putting up plexiglass barriers when they need to be closer, said Gaydos.

Democrats have said that the government should mandate worker protections rather than simply asking for good-faith efforts as Trump did in his executive order. “It is vital that we do everything we can to protect food supply workers,” wrote a group of Democratic senators in a letter to Trump. “Breakdowns in the food supply chain could have significant economic impacts for both consumers and agricultural producers.”

There’s only so much the government can do. Trump’s executive order releases meat companies from liability from worker’s lawsuits, and it overrules state and local authorities calling for shutdowns. But the president can’t force workers to come back to the job if they don’t feel safe.

How will this crisis change things?

A crisis exposes weaknesses. This one is revealing two major vulnerabilities in the meat industry: Its reliance on human labor and its concentration.

Henry Ford modeled his assembly lines after the disassembly lines he saw in meat packing plants. Automobile assembly lines grew more and more automated, while meat plants continued to rely mostly on dirty, dangerous grunt work. The experience of a pandemic could soon change that. There’s one slaughterhouse in Holland that is almost completely run by machines.

“There is going to be even more of a rush to automate farmwork and slaughterhouses,” Sexton said.

The hourglass shape of the meat industry is another vulnerability. This concentration of just a few giant meat companies is able to put inexpensive meat on the plate of people at even the lowest income levels in America, but it can’t nimbly respond to changes.

Concentration causes other problems, too. For instance, the meat behemoth JBS recently sent a cease-and-desist letter to a union for conducting a “multi-faceted corporate campaign” to “coerce” the corporation to make worker-safety concessions at a plant in Greeley, Colorado.

Of course, unions exist to coerce companies to give workers more money and better conditions. The fact that JBS views the union demands as an illegal breach, rather than business as usual, suggests that it is not used to serious challenges to its authority.

The number of slaughterhouses has fallen 70 percent since the 1960s, a result of bigger companies swallowing up the little ones to grow even bigger. But the pandemic has put these giants in the spotlight. On Wednesday, a bipartisan pair of Senators asked the Federal Trade Commission to investigate meatpacking consolidation.

And maybe this crisis will lead politicians to lift some of the regulatory barriers that keep smaller businesses out, Lusk said.

What about the environment? At the moment, that’s an afterthought. The attention right now is focused on ensuring Americans have a steady supply of meat, not on prodding the industry to become environmentally sustainable.

How can I do a climate-friendly spring cleaning during a pandemic?