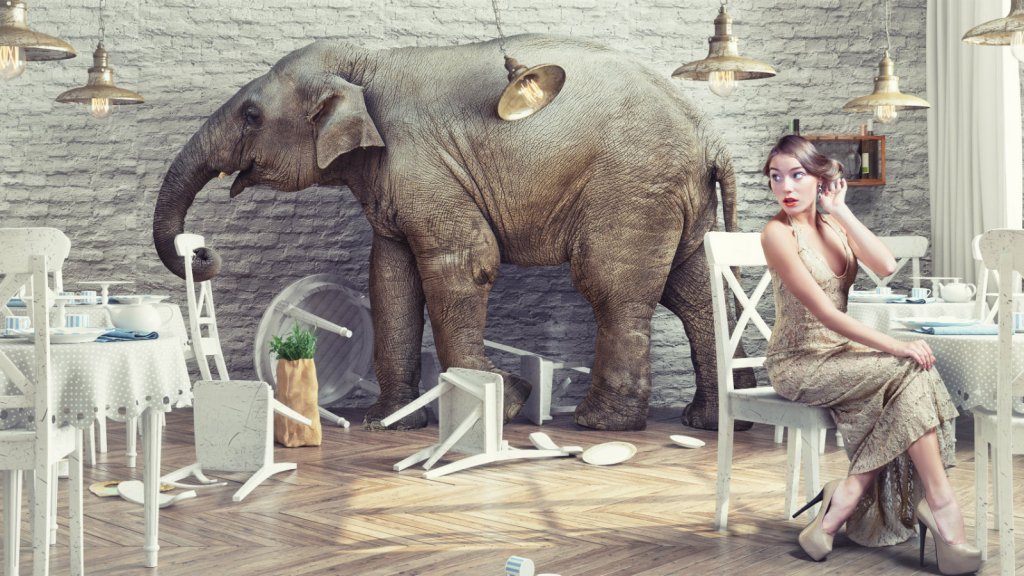 If you think about it, farmers should be on the cutting edge of climate change discussions: They are directly affected as weather patterns shift, and they have the opportunity be part of the solution by sequestering carbon. But American farm groups have mostly opposed climate policies. Longtime agricultural reporter Chris Clayton — who is ag policy editor at DTN/The Progressive Farmer — has written a book showing how this state of affairs took shape. It’s called The Elephant in the Cornfield: The Politics of Agriculture and Climate Change (available as an e-book).

The elephant is, of course, climate change. “We got to a point in Congress, in the House and Senate agriculture committees, where they just flat ignored the topic of climate change. They don’t want to discuss it, they don’t want to hold any hearings about it, they don’t want to analyze any of the multiple studies out there on there on the impacts on food or agriculture.” Clayton said. But the elephant is also a metaphor for the microbes in the soil — some scientists say the soil contains the weight of an elephant in living things per acre. This swarming soil life has the potential to suck up carbon, and could be the solution for climate change if we can figure out reliable methods for kickstarting the process and making sure the carbon doesn’t simply return to the atmosphere in a year or two (both major caveats).

Clayton’s record of the struggle over climate policy contains vital information for anyone seeking to navigate the political shoals surrounding greenhouse gas legislation. I spoke to him recently about what we might learn from this history — assuming we’d rather not repeat it.

Q. How important are farmers? They are such a small proportion of the electorate at this point. Does ag clout really determine the success or failure of these policies?

A. I don’t think you are going to be able to have a good climate policy in the United States unless you have agriculture on board. Every state has farmers, every senator pays attention to that. Not so much in the House, where you have so much urban influence, but even there, the House Agricultural Committee is influential — it can swing votes.

Q. Farmers have already benefited from climate legislation — from the subsidies for wind power and biofuels. They could benefit more if they were paid to sequester carbon in the soil. So why did they oppose a carbon tax — or cap and trade?

A. As President Obama took office and it looked like we were going to have some serious movement on climate legislation, agriculture began to pay more attention to what was going on in conservative radio, and they began to bring in these so-called think tanks from Washington, D.C., that are very much resistant to doing anything on climate change — the Heartland Institute, the Competitive Enterprise Institute, the Hudson Institute. They began showing up and giving keynote addresses, particularly to the American Farm Bureau associations. Over and over, I’d go to a conference and there would be someone from one of these institutes giving a presentation on why climate science was faulty.

Q. How much of it was ideological, and how much was a practical fear that climate legislation was going to make it impossible for farmers to stay in business?

A. There’s so much fear of government regulation. But with cap and trade, agriculture was exempted. And the major farm groups still opposed this legislation that specifically excluded them from regulation.

Q. I was blown away by that — I didn’t know that fact before reading your book.

A. Yes, you had congressmen like [former House Agriculture Committee chairman] Collin Peterson calling up agricultural groups and saying, what do you guys want? And they got pretty much everything they wanted. But then you still had so much resistance from the Farm Bureau and conservative radio. As soon as the legislation passed the House, you had Rush Limbaugh saying the American farmer was responsible for the biggest tax increase in American history. Every group that was supportive of it suddenly pulled back and walked away from the legislation.

Q. So it may have started out as this concern about being taxed into oblivion, but even after farmers’ groups got everything they were asking for, they still ended up opposing climate legislation out of tribal allegiance.

A. It seems like there was a real connection and tie between farm groups, the fertilizer lobby, and petroleum interests. They pushed all the buttons to make it all about regulation that could require farmers to do X, Y, and Z, and that it would raise the price of fertilizer.

Q. So do you see any hope for national climate legislation, given that ag is so aligned with this conservative block that frames any kind of climate policy as an attack on freedom?

A. I don’t know. Eventually there will have to be buy-in because ag will have to adapt to climate change, and it will require funding to make changes.

Q. It seems like farmers are totally willing to try things when it’s demanded by industry, or when it comes from their Natural Resources Conservation Service officer or cooperative extension agent. But it’s a whole different story when it’s politicized — when it’s associated with Republicans and Democrats at the federal level.

A. It really is. There’s a lot of hostility to Obama. We need some rural Republican voices saying, “We need to take a look at the potential opportunities and benefits.” We see that in Iowa with its renewable energy focus: 25 percent of our energy comes from wind. That led to other industries coming in — there’s a huge Google facility, something like $600 million of investment near where I live. Google and Facebook have come into Iowa mainly because of all of our wind power.

Q. Are there any young conservative voices coming up who might embrace a climate policy as a way to improve the economy?

A. Democrats in rural America are becoming scarce, and Republicans don’t want to broach the topic. If there was a young Republican out there speaking a lot about the issue of climate change, I’d think there’d have been a lot more reporting on that person.

Q. Right, I would probably already know that name.

A. But you do see more people in agriculture talking about it in different ways. Greg Page, chairman of Cargill, is talking about the business imperative of making some changes [see Grist’s story on Cargill and General Mills]. Just the other day Monsanto announced that it was pushing on its supply chain to create a carbon-neutral environment for the company. You have the retailers and food companies demanding changes in the carbon footprint as well, demanding changes in fertilizer practices. During cap and trade, Monsanto and all these major ag companies largely stayed back. They had statements on their websites about their concerns about climate change, but they were not politically engaged. Now here they are out there making public commitments. Hopefully, long-term, we’ll see these industry demands leading to some shift in the politics.

Q. And you write in the book that a lot of farmers are taking climate-friendly measures on their farms without any incentives or regulation.

A. A lot of farmers are way out in front of curve. People doing no till for decades. Or doing cover crops because they had soil erosion problems or wanted a cheaper way to introduce nitrogen into the soil, or because they just simply believed that something needs to be growing on the land year-round.

The same practices that you’d use to sequester carbon in the soil also reduce run-off and improve water quality. Those same practices build the resiliency for farms to withstand droughts or floods. With cap and trade, farmers could be getting paid a lot for that. Same with building up clean energy: Where are those facilities going to go? They are going to go in rural America, by and large. There is a real missed opportunity for agriculture to be a beneficiary.