U.S. farmers are growing a lot more healthy stuff — veggies and beans — but they can’t seem to sell it to Americans. U.S. veggie consumption has stayed pretty flat, according to a new report from the Department of Agriculture, though production is booming:

Despite ongoing drought and water shortages in California, where about 40 percent of vegetables and pulses [dried beans, peas, and lentils] are grown, total U.S. output volume rose 5 percent from last year as harvested area expanded.

That 5 percent growth amounts to a lot in our massive farm economy — around 6.5 billion pounds. But Americans are still only eating 1.6 cups of that per day on average, far below the recommended 2.5 cups (for a 2,000 calorie diet). 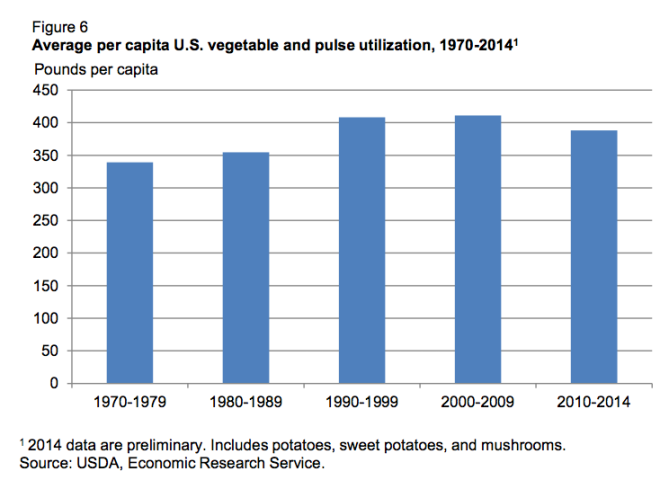 Dig into the data and you’ll see a glimmer of good news: Americans are eating less potatoes and iceberg lettuce, but more beans and romaine. On average, Americans cut 4.8 pounds of potatoes out of their yearly diets between 2013 and 2014. French fries and potato chips are declining at a rate of 1.1 percent a year. 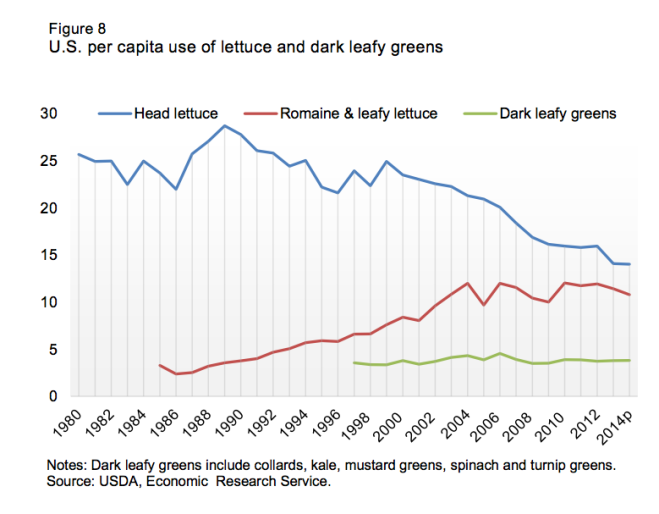 As you can see, iceberg (or head) lettuce has been going out of style. Interestingly, despite all the kale talk in the media, Americans aren’t eating substantially more dark leafy greens.

The statistics this year are a mixed bag (of pre-washed baby salad greens). The Economic Research Service expects per capita veggie eating to rise back to their previous year-2000 peak level soon. (Why’d they drop? Unclear — could be related to the economic downturn.) Let’s hope that this time, it’s not all French fries.