Part of a series on tackling global poverty while protecting the environment.

Environmentalists should be cheering as poor countries build up cities and industry.

That’s an intentionally provocative way of putting it. But it’s correct, nonetheless.

This may be counterintuitive, because most of us are used to thinking that consumption (of energy and resources) is bad for the environment, and people in poverty barely consume anything. Focus on consumption alone and poverty looks green.

But it’s an ugly shade of green. We can decarbonize as fast as possible and radically redistribute resources, but there’s also no moral way to ask poor people to wait until that happens. So when it comes to energy and resource use, yeah, environmentalists should swallow hard and cheer as poor countries build factories, power plants, and highways.

But shift your focus from poor countries’ meager consumption to their sprawling farms and burning forests, and it’s clear that poverty isn’t green at all. When it comes to farming (and clearing land for more farms), growing prosperity could shrink the human footprint on the land, and therefore reduce emissions. It’s good all around.

Here, let me explain what I mean with the help of these charts. First of all: 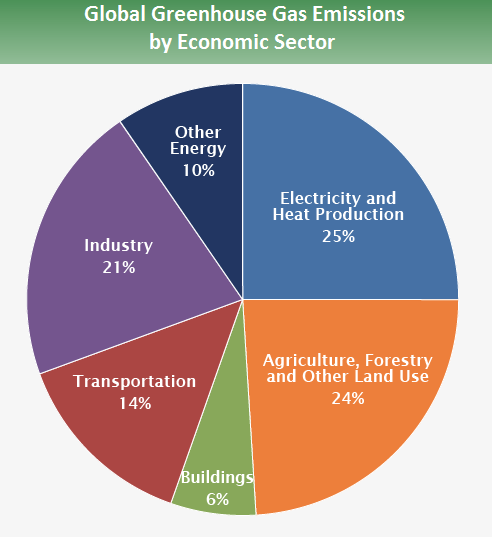 Land use is the second biggest source of emissions

It’s a big honking chunk. Now let’s zoom in on that orange wedge. Most of those emissions come from land-use change — which basically means turning forests into farms and burning carbon-rich peatlands. Another big chunk comes from cattle burping out the methane produced by fermenting grass in their stomachs. That’s called “enteric fermentation” in the next chart: 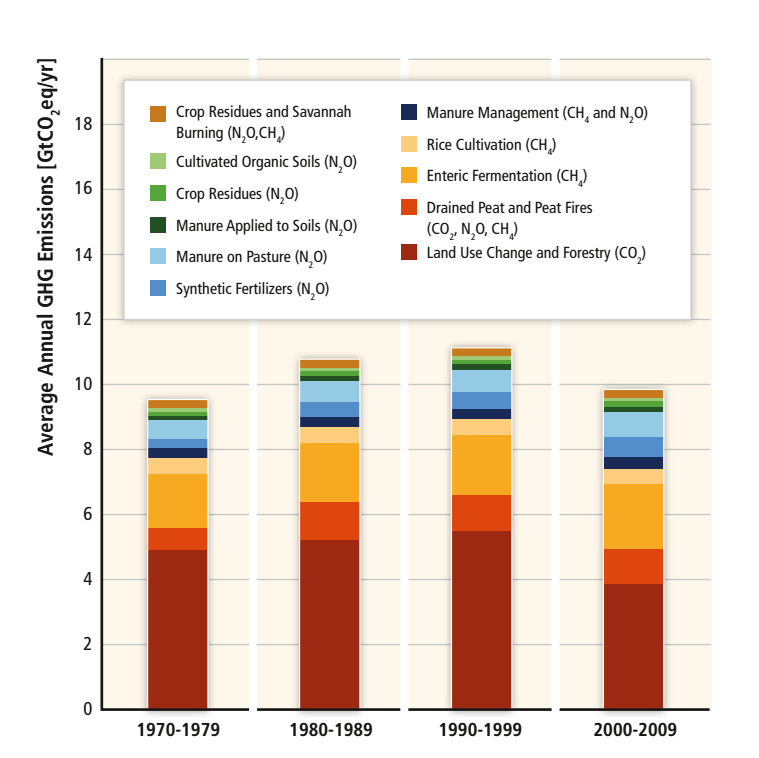 If we look at how these emissions are distributed around the world, it’s clear that a relatively small portion of these gases come from affluent farmers in North America. Poverty drives these higher emissions in developing countries. Farmers are driven to fell trees, plow crappy land, and cultivate eroding hillsides — all of which increases emissions.

Developing countries are often reluctant to crack down on the people who are making a living and boosting economic growth by burning forests. And even when governments have the will, they may lack the resources to regulate. 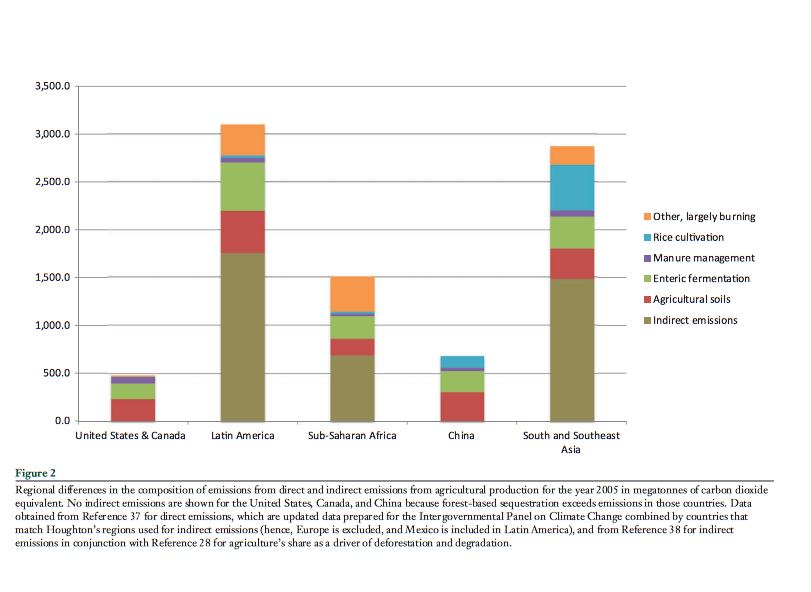 Annual Review of Environment and Resources

There’s an awkward adolescent period as countries begin to emerge from poverty and cut forests more rapidly than ever. North America and China are mostly over that hump. But a lot of South America, Africa, and Asia are going through that awkward phase. Countries can have a much less destructive puberty by educating and investing in farmers, so they can grow more food without sprawling into wildlands.

Data from the U.N. Food and Agriculture Organization show just how successful farmers have been at squeezing more grain from their fields. As you can see in the next chart, the land (measured here in hectares) required to feed a single person has declined more than half since 1960. 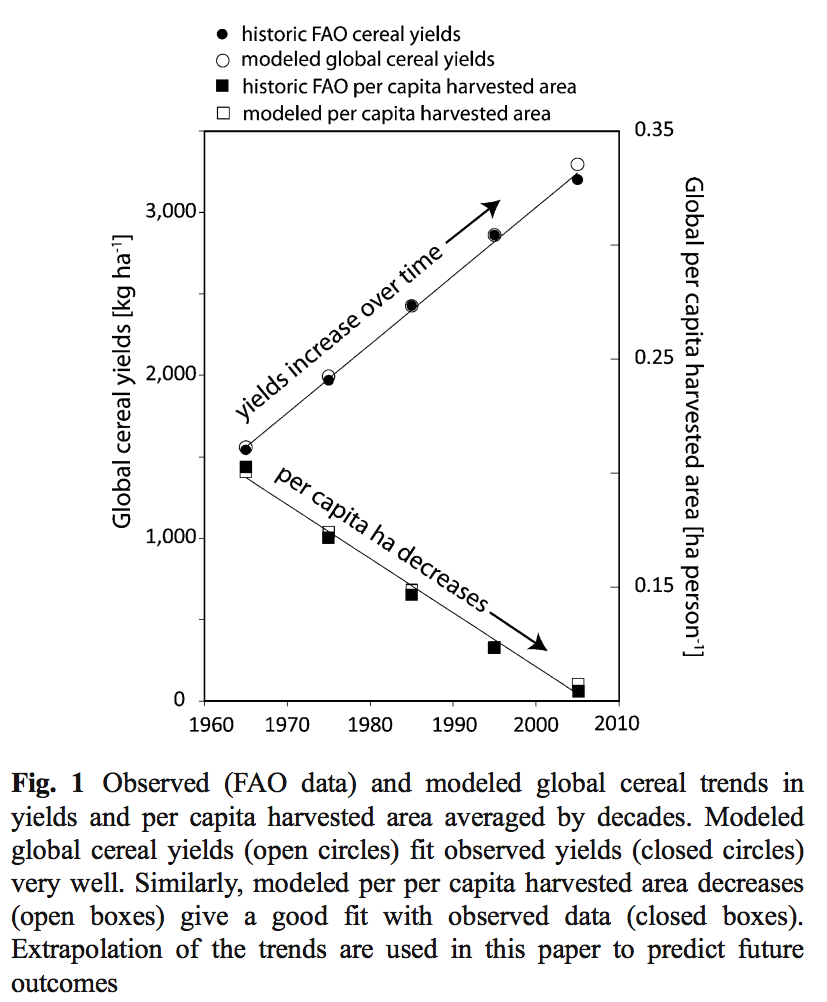 Basically, when farmers have more resources, they can grow more food. That’s what has happened around the world over the last 50 years.

The chart above shows the amount of land needed to provide a basic vegetarian diet. This is complicated by the fact that as incomes increase, people tend to eat more meat and waste more food.

As poor farmers increase their yields, it does a lot to lift them out of poverty.

Indeed, if history is any guide, countries only achieve a mass exodus from poverty when rural farmers improve their productivity. This leads to what economists call “structural transformation,” in which the number of farmers declines, the economy grows, and birth and childhood mortality rates drop (more on that here). This leads to rising incomes and healthier, more prosperous people. That, in broad strokes, is the story of the last century, illustrated in this chart from Gapminder.

That has gone hand in hand with declining hunger, as measured by the global hunger index: 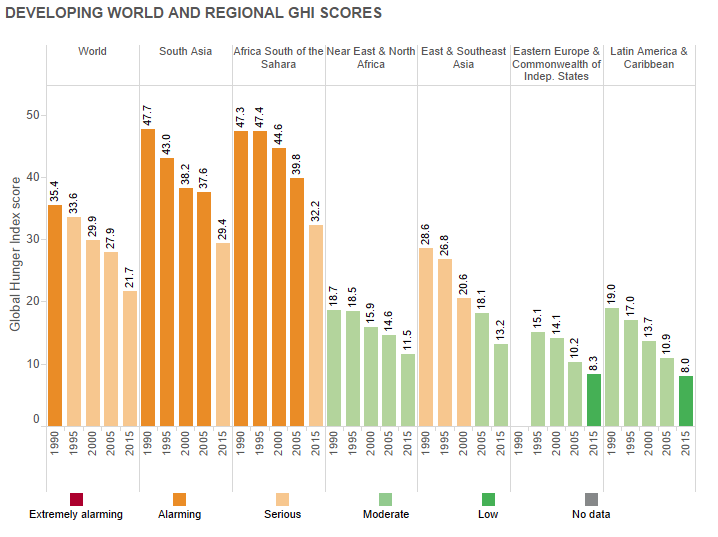 Wait, what about overpopulation?

It’s all very well to decrease the amount of farmland needed per person, but we’ll still overwhelm the planet if our total population keeps increasing. Fortunately, our population growth is slowing down. A lot. 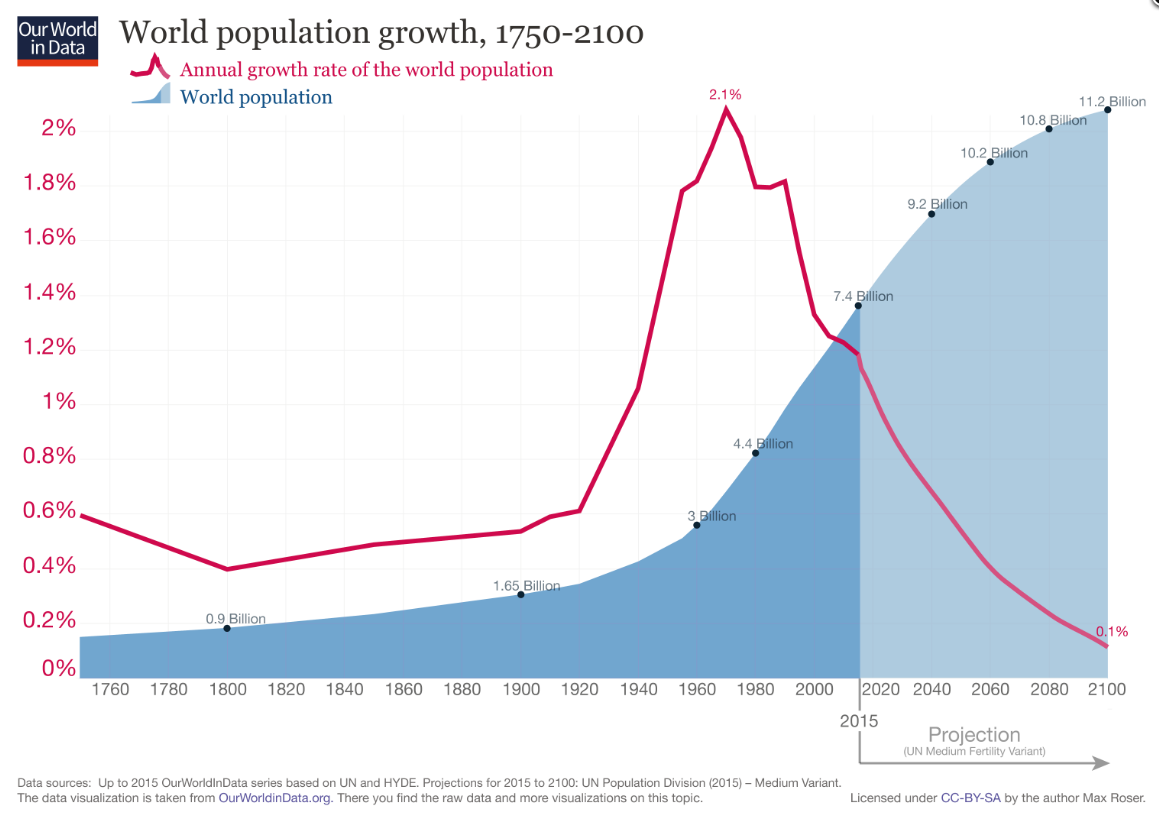 Remember how we mentioned that the move out of agrarian poverty came with declining birth and death rates? It turns out that, as children become less likely to die, and women gain power over their body, people have fewer babies. You can see this clearly in Sweden, a country once wracked by famine and war. 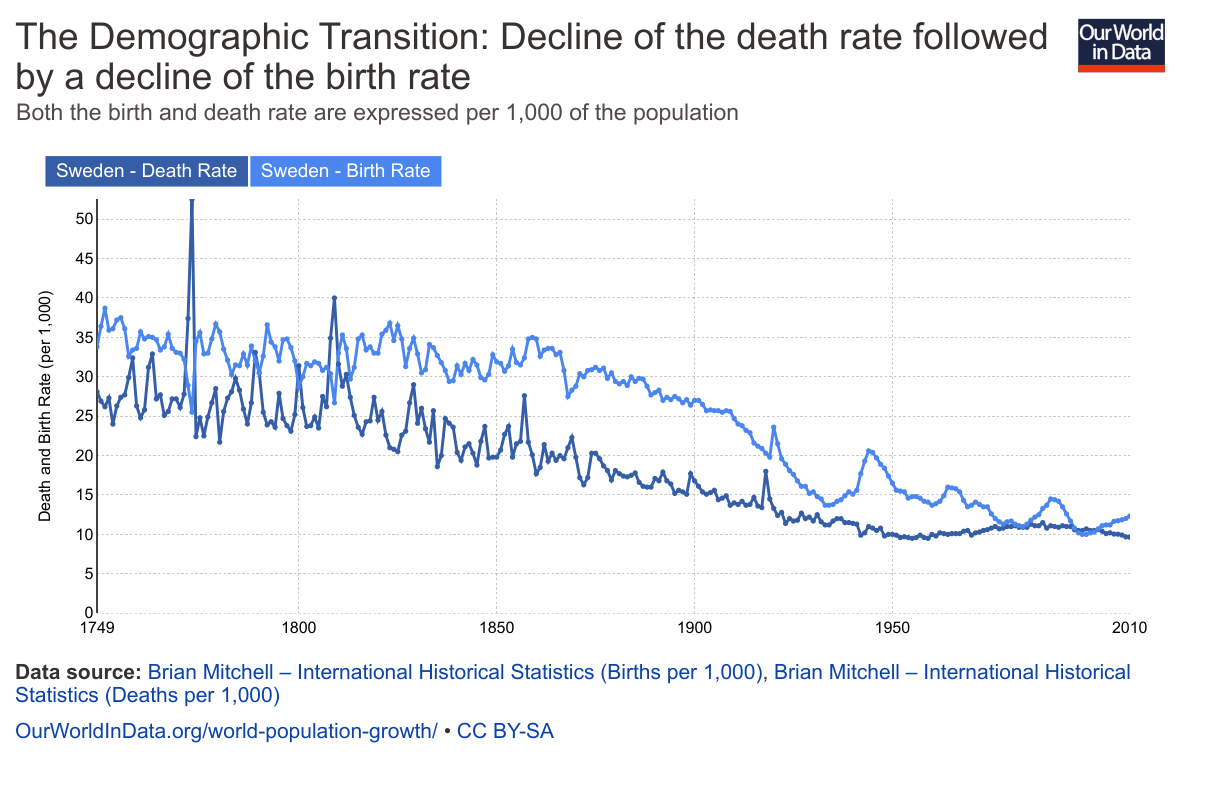 This pattern repeats again and again, all over the world.

Is the decline in fertility fast enough? Should we do something more — institute a one-child policy like China? The thing is, coercive regulations aren’t nearly as powerful as these larger economic forces. Taiwan, which didn’t attempt to restrict fertility, saw a similar decline in the number of births as China. 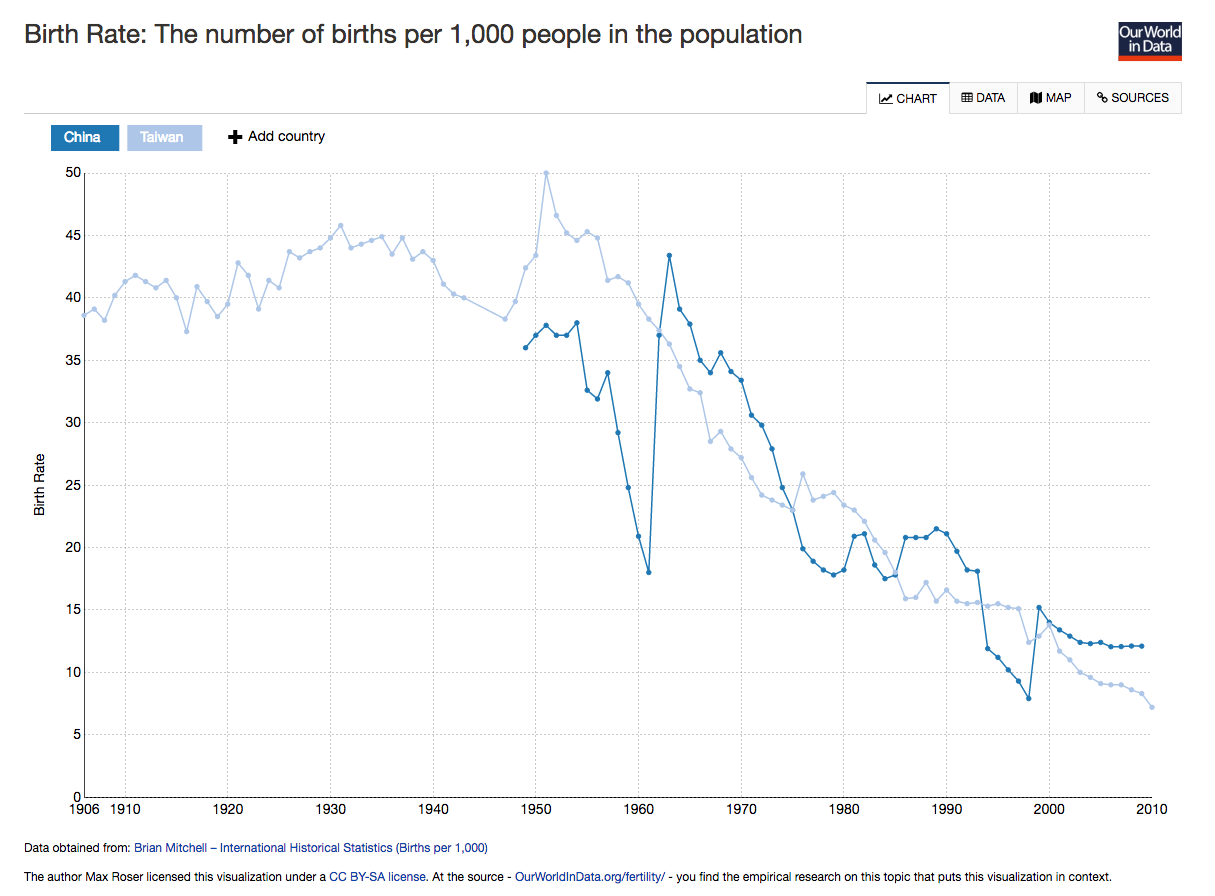 The upshot is really good news. If population growth levels off, and the land required to feed a person keeps dropping, it means we should reach a turning point in the next 50 years, where the amount of wildland begins to rebound, and emissions from burning forests takes a precipitous drop.

The faster poverty diminishes, the more natural systems will rebound to nurture future generations. This suggests that ending poverty must be a central focus, if not the central focus, of environmental efforts.