Fifth in a series on tackling poverty while protecting the environment.  Read the intro.

In a fertile green valley between the mountains of northeastern Thailand lies a farm town of about 300 households – Ban Umung. People leave their doors open, and children run from house to house, often joining other families for meals. Residents have more than enough to eat, and motorbikes, rudimentary tractors, and smartphones are widespread.

Across the world, there are more than 550 million small farmers, and most live in communities on the cusp of modernization, like Ban Umung. The path these communities follow will have a big impact on the global climate. Farming villages play a crucial role in the economic transformation that countries pass through as they move out of poverty. Countries start this economic metamorphosis with the majority of their populations working as farmers, and come out the other side with just a few farmers feeding everyone else. 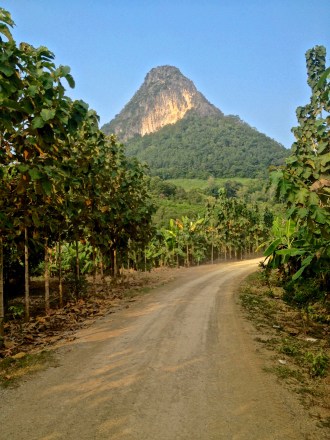 If places like Ban Umung proceed along the traditional path, their farms will consolidate, grow larger, become more efficient, and the greenhouse gases released in food production will decrease. That would take pressure off forests and wildlands. But the traditional path of economic development also relies mainly on fossil fuels: As incomes rise and people start buying more stuff and using more energy, carbon emissions increase, and that likely eclipses the savings from farm efficiency. In short: Modernization decreases the amount of land required to feed a person, but it dramatically increases the amount of energy people consume.

But it’s possible small farmers like those in Ban Umung won’t follow the traditional path, and instead will decide that they like their relatively low-carbon, rural lives.

There’s some evidence that many rural people in developing countries are opting to stay on small farms. The tide of economic progress was supposed to sweep most small farmers into cities, but in Asia, generations of farmers have gravitated back to their rural villages, despite the fact that higher-paying jobs are available in cities. As Jonathan Rigg, a geographer at the National University of Singapore, wrote in 2015, “Small farms not only continue to dominate the Asian rural landscape, but they are getting smaller by the decade. Smallholdings in Asia today are thought to be half the size they were in the 1960s and 1970s.”

But are small farmers embracing pastoral simplicity out of preference or necessity? We decided to ask a couple of them how they feel about their profession and lifestyle, and whether they want their children to follow in their footsteps. I, Alain, interviewed Paitoon Nakrerai and Wipada Hongsa, two farmers in Ban Umung. They can’t speak for all small farmers, obviously, but they aren’t outliers: What they said squares with findings of geographers, sociologists, and anthropologists who have studied similar populations in Southeast Asia.

Nakrerai is a 49-year-old farmer with 16 acres of land where he primarily grows mango and tamarind trees, plus some bananas and bamboo shoots. He also raises fish in a small pond. He and his wife have two boys, and live with an extended family of eight. He makes a little less than $5,800 a year from farming, which is close the average for a farm in that area. “It’s not enough for daily expenses,” he said. His wife has a part-time job selling insurance, which brings in about as much as the farm and keeps them in the black. 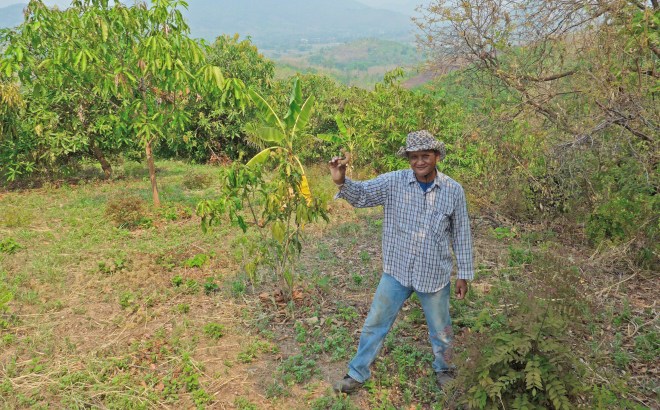 His wife and his eldest son, 22, help on the farm, while his younger son, 11, attends the local school. When I asked Nakrerai if he’d like his children to be farmers, he said, “Yes and no. I want them to be businessman and farmer at the same time. Being a farmer is nice and good because it’s the work of our ancestors, it’s part of our identity, but I want them to do more than just farming.” Perhaps they could earn a better living by selling organic food for higher prices, but his sons aren’t very interested in farming, he said.

Next, I talked to Hongsa, a 41-year-old farmer and a prominent figure in the village. People come to her if they have a problem or need something done. When companies began digging mines in the nearby mountains, she was one of the representatives advocating for the village’s rights. She and her husband live with her parents, a 15-year-old son, and an 8-year-old daughter. They farm 40 acres — mango, tamarind, rubber tree, corn, rice, and cassava — which brings in a little over $7,000 a year. That’s still not enough to support the family, she said. But unlike Nakrerai, she thinks that her children may have a successful future in farming.

“As our ancestors did before, as I do today, I want my children to do after me. Being a farmer is freedom, you can make more money if you are diligent and know the method to increase productivity,” she said. 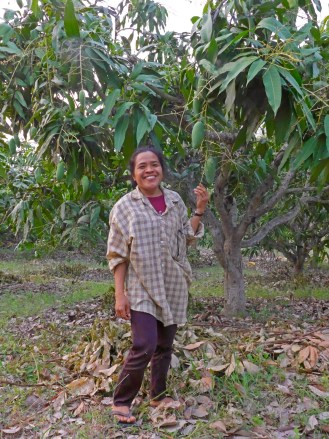 Like Hongsa, Nakrerai also likes the independence of farming. “It’s free and there is no boss,” he said. This freedom can also be important on an economic level, Rigg and other researchers have found. When you own a farm, there’s no boss to fire you, even if you get old and slow down. People can, and do, earn more money taking other jobs — that’s how they supplement their insufficient farm income. But those jobs are precarious, and they usually don’t provide enough to save up for retirement. Many farming villages have well-established traditions for taking care of people as they age.

Broadly speaking, there are two different scenarios for what could happen next in villages like Ban Umung. The first: Each generation gets more education, and young people spend more time working in cities before they move back home. Eventually, the young people may stop returning altogether. Perhaps the grandchildren of Nakrerai may sell or rent land to the grandchildren of Hongsa. That kind of farm consolidation would help keep food prices low, which would be good for urban populations, but it would hollow out the population of rural villages.

On the other side of the spectrum of possibility, people might end up staying in the villages, and finding ways to sell their food for higher prices, or getting the government to enact policies to increase farm revenue. Policies favoring higher food prices would lift up the the rural poor, but hurt the urban poor.

Either way, we can’t expect people to simply be satisfied with less. Most rural villagers, like most city dwellers, want modernity, said Rigg. That doesn’t mean they want conspicuous consumption — like sports cars and McMansions — but they do want education, advanced medical care, and indoor bathrooms and modern sanitation systems. And as people get richer, they tend to consume more electricity, more gasoline, more meat and dairy.

Rigg has watched rural villages change over the course of his career, and it’s clear to him that increases in productivity, incomes, and consumption have been good for residents. “It’s astonishing how much people’s lives have improved,” he said. In 1981, 58 percent of people in Southeast Asia were living on less than $1.25 a day. In 2010, that figure was 14 percent. Extreme poverty is declining fast.

Whether people move to the cities or stay on rural farms, they’ll be demanding — rightly — a higher quality of life. The big question, then, is if Thailand and other rising countries will be able to to meet that demand with clean energy instead of dirty.

Alain Kilajian did research in Thailand as a Fulbright Fellow.

How a growing timber business revived a forest