Is bacon back? The recent news that your favorite breakfast meat can cause cancer sent self-righteous vegans cackling, but they were shushed this week after the publication of a study alleging that meat actually has a lower carbon footprint than vegetables. At least, that’s what you might think if you’d read this article from Scientific American or this one from The Telegraph or this one from The Christian Science Monitor or a multitude of others proclaiming that bacon is better for the climate than salads.

According to new research from Carnegie Mellon University, following the USDA recommendations to consume more fruits, vegetables, dairy and seafood is more harmful to the environment because those foods have relatively high resource uses and greenhouse gas (GHG) emissions per calorie. Published in Environment Systems and Decisions, the study measured the changes in energy use, blue water footprint and GHG emissions associated with U.S. food consumption patterns.

“Eating lettuce is over three times worse in greenhouse gas emissions than eating bacon,” said Paul Fischbeck, professor of social and decisions sciences and engineering and public policy. “Lots of common vegetables require more resources per calorie than you would think. Eggplant, celery and cucumbers look particularly bad when compared to pork or chicken.”

So romaine is worse for the planet than pork belly? Really? Does this mean we can all take the lettuce out of our BLTs, add another layer of bacon, and feel just great about it?

Actually, no. Researchers compared the foods calorie-for-calorie, which can be misleading. “It is absurd to compare the environmental impacts between bacon and lettuce when you’re using calories as the denominator,” Brent Kim of the Johns Hopkins Center for a Livable Future’s Food Production and Public Health Program told ThinkProgress. “A serving of lettuce has fewer calories than a stick of gum.”

In other words, you’d have to eat a huge number of salads to equal the same number of calories you get from a few pieces of bacon. Just how many salads? We made this handy chart to illustrate. 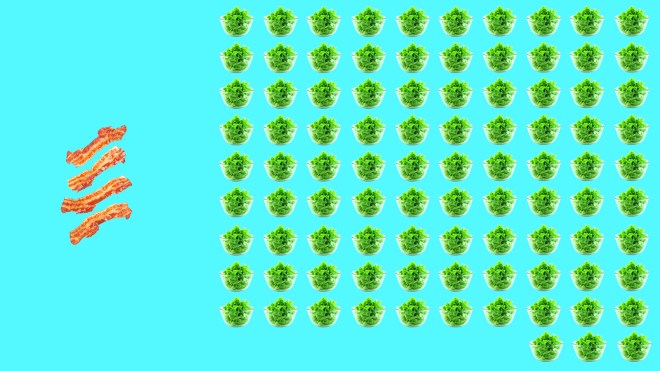 Sorry, guys! Meat is still terrible for the planet, cigarettes still cause cancer, and Donald Trump is still running for president. As you were.

If you thought New Jersey was toxic, wait until you hear the news about its state prisons