Study finds a link between neonic pesticides and honeybee deaths 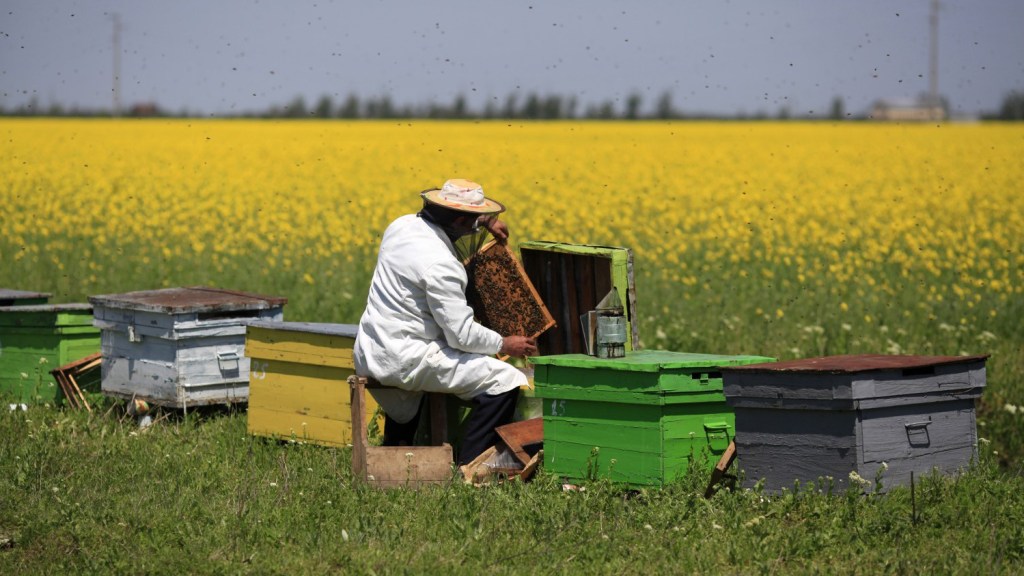 A beekeeper in a field of rapeseed some 145 miles west of Bucharest, Romania REUTERS/Radu Sigheti
Johnny Neonic

Study finds a link between neonic pesticides and honeybee deaths

A new study, published on Thursday, shows a correlation between honeybee colony deaths and neonicotinoid pesticide usage in the United Kingdom.

Neonicotinoids generally come as a seed coating. When the seed sprouts, it takes in the pesticide, which then protects it against predators. But if that plant flowers, small amounts of the pesticide will linger in the pollen and nectar, which may hurt the beneficial insects, like bees, visiting those blooms to feed.

There’s some controversy about this: Scientists have found some indications that the neonics are hurting wild honeybees, but not domestic honeybees. As Maj Rundlöf, the lead author of one of those studies, told Nature: “This doesn’t mean that there aren’t any negative effects on honeybees, but so far I don’t see any evidence from field studies supporting that.”

Well, now there is a field study supporting that. This new study found a concerning association with just one neonic, imidacloprid, and the authors wrote that we shouldn’t extrapolate to others. But still, this is the first large-scale field study to suggest a link between domestic bee troubles and a neonic.

It’s always been clear that neonics are bad for bees in sufficient quantities. After all, they kill insects, and bees are insects. But before now, there wasn’t good evidence that the small amounts of neonics that hives were getting exposed to in real world situations were having a noticeable effect. That’s why this study matters.

“It is shown that the incidence of bee colony failure is higher in areas in which neonicotinoids are used more intensively. This provides important field evidence confirming earlier results of negative bee impacts in controlled studies,” Felix Wäckers, a professor at the Lancaster Environment Center, Lancaster University, told the Science Media Center.

The case against neonics is often inflated beyond all reason to suggest that they are the single most important cause of the bee-health problems (almost certainly not), or that they might threaten bees with extinction (no way).

But even if we dispense with the hyperbole, there’s still reason to worry about these chemicals. While some pesticides target their pests very specifically, neonics kill a lot of things. And neonics stick around in the environment: The U.S. Geological Survey just published a paper showing that it had found neonics in 53 percent of the water samples taken from a nationwide survey for streams. Add in this new evidence correlating imidacloprid with beehive problems, and the case for a cautionary approach now looks very persuasive.