In April, a little black calf with dabs of white on his back hooves was born. It was the first time Joey Owen, a postdoctoral researcher at the University of California, Davis, had ever seen a cow give birth, and he watched in wonder as the calf, Cosmo, stood up and took its first steps on wobbly legs. Owen had spent the better part of five years working toward this moment, refining the process of gene editing as he collected eggs, fertilized them to create zygotes, and injected genome editing reagents into these one-cell embryos. One of those zygotes became Cosmo.

“It was surreal,” Owen said.

On Thursday, Owen, along with, Alison Van Eenennaam, an animal geneticist at U.C. Davis, and a team of seven other scientists, revealed Cosmo’s existence. It’s the first time anyone has produced a bull-calf that could sire 75 percent male calves — rather than the normal 50 percent. It could also be a win for the environment, with fewer cattle needed to produce the same amount of beef. Bulls have fewer methane belches per hamburger patty. They simply grow more efficiently, requiring less water, less feed, and less land than females to bulk up. “They are more like a Prius than a Hummer,” Van Eenennaam said. 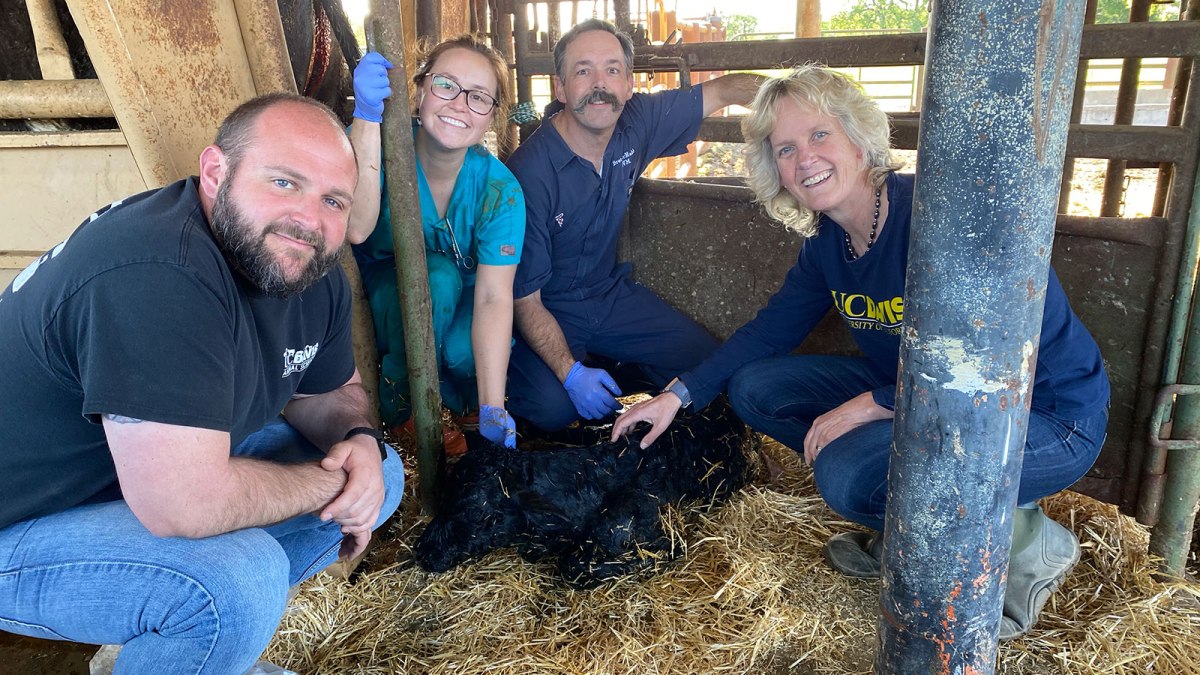 Joey Owen, on the left, and Alison Van Eenennaam on the right, with newborn Cosmo and the veterinarians Bret McNabb and Tara Urbano who delivered the calf. Photo courtesy of U.C. Davis

This comes at a time when the livestock industry is searching for ways to fix up its image as a climate villain. Burger King recently tried to do some brand PR with a yodeling kid acknowledging the problem. Ranchers are investigating more climate-friendly management techniques. And big companies are partnering with environmentalists to keep forests from turning into pastureland (with mixed results). But the biggest value in creating Cosmo might be in the breakthrough he represents in the field of gene editing.

Back in 2015, Van Eenennaam asked Owen if he wanted to try his hand at genome editing a bull so all its offspring grew like males. No one had ever done anything like this before, and Owen said he figured the chances of success were slim to none. “OK,” he said, “let’s do it.”

Van Eenennaam planned to take a gene that initiates the development of male physiology from the Y chromosome and add it to the X chromosome. (Reminder: male is XY; female is XX) That way, even genetically female cows with two X chromosomes should develop as males.

The scientists chose a location on the X chromosome that didn’t seem chockablock with important genes, one where they might add a gene without messing anything up. It appeared to be a blank spot on the map of the bovine genome. But it was only blank because it was unexplored: As soon as Owen edited this spot, the embryos died.

After a lot more hard work and experimentation, the scientists discovered the techniques necessary to add a gene to a cow zygote, which might be the most revolutionary element of this research, Owen said. Now other scientists have much better knowledge of hot to add genes to protect animals from getting all sorts of gruesome diseases.

“This opens up the possibility of tackling a lot of issues related to livestock,” he said.

It will also help scientists understand what happens when gene editing gets a little messy. After Cosmo was born, Van Eenennaam took some of the calf’s blood so that he could look closely at the spot where the new gene had entered the DNA. It was in just the right place, but instead of one copy of the gene, there were seven. There was also a bit of DNA wedged in there, left over from the genetic delivery mechanism the scientists had used.

These scrambled genes may conjure images of monstrous mutants, but it’s likely they won’t cause problems. Gene duplication and mixing happens all the time during normal reproduction. And Cosmo seems, well, strong as a bull.

Still, the fact that the genes are untidy could mean that the early vision of gene editing as an easy, typo-free tool were overly optimistic. Van Eenennaam said that a major thrust of the research was meant to identify and fix potential problems like this. That’s why the U.S. Department of Agriculture paid for the research as part of its biotechnology risk assessment program. She only hopes that she can keep tinkering to fix these issues.

“You get a result and say ‘Hmm, well, that’s not what we wanted, but I think we can learn from this and try a different approach,’” Van Eenennaam said. “That’s science! If any little unexpected thing shuts down the entire field of investigation forever onwards we wouldn’t get anything done.”

Get the science nailed down, and then there’s regulation and public opinion to contend with, which are likely more imposing barriers than the gene editing. A lot of things will have to fall into place before gene-edited cattle roam the range, let alone the butcher counter.

As for Cosmo, no one is allowed to eat him. He’s a science experiment, not a steak.