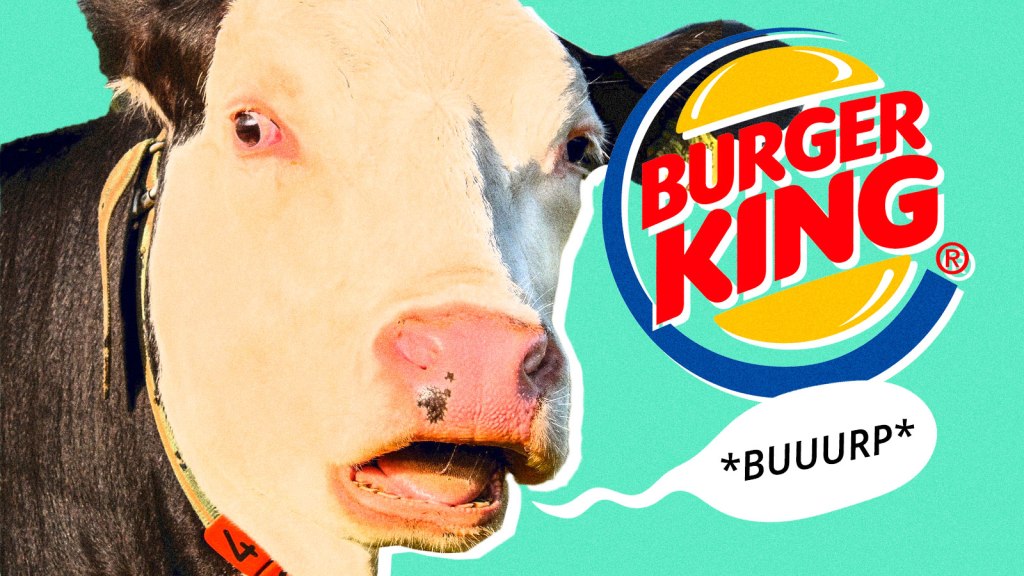 On Tuesday, Burger King announced that it was treating some of its cows to a new menu with a Thai twist, adding lemongrass to their feed.

It sounds like a whopper, but it’s true. The fast-food giant is in the middle of a long-term scientific experiment — how much can it reduce the amount of methane cows burp into the atmosphere by adding lemongrass to their feed?

Burger King’s restaurants will be offering the fruits of its initial labor, new “reduced methane emissions beef,” to customers in Austin, Los Angeles, Miami, New York City, and Portland, for a limited time this month. The news exploded onto the internet on Tuesday with a splashy music video starring the Walmart yodeling kid and directed by Michel Gondry.

The video explains how cow emissions contribute to climate change in a catchy sing-along, and with accurate science to boot. Well, for the most part — for the sake of a rhyme, the lyrics talk about reducing cows’ farts, but it’s actually their burps that have the biggest impact. (And the buoyant tone when the kids sing, “That methane that they pass is a greenhouse gas that’ll trap the sun’s heat n’ change our climate too!” while wearing gas masks is a little disconcerting.)

According to the United Nations’ Food and Agriculture Organization, livestock are responsible for 14.5 percent of all human-caused greenhouse gas emissions in the world, and the methane emitted when cows burp constitutes 39 percent of that. Methane doesn’t stick around in the atmosphere as long as carbon dioxide, but while it’s up there, it traps 86 times as much heat as CO2 — and largely due to agriculture and fossil fuel production, methane emissions have hit an all-time high.

Burger King has never disclosed its climate impact, nor has it released a plan to cut its carbon footprint. But in the ad campaign, the company is at least admitting, “Since we are part of the problem, we are working to be part of the solution.” However, BK may have jumped the gun with the release of the low-methane burger. In fine print at the end of the video, the company says that research conducted at the Autonomous University of the State of Mexico (UNAM) and the University of California, Davis, found that when fed to cows during the last three to four months of their lives, the lemongrass diet reduced their methane emissions by an average of 33 percent per day during that time.

But that number may be a bit of an exaggeration. One of the scientists involved in the research noted on Twitter that only one of the two studies found a 33 percent reduction in emissions:

Can't say I love the video but we participated for the US part of the research. My brilliant grad student @HonanMallory worked hard on it. Our Mexican colleagues found 33% reduction but not in our study. Turns our Fresno sourced lemongrass was not quite the same as Mexican https://t.co/3rpLPakVd3

Kebreab, a professor of animal science at Davis, also tweeted that the study conducted by UNAM is currently in peer review, and the UC Davis study is still in the process of being written.

Although Restaurant Brands International, the company that owns Burger King, claims that it “discovered” that feeding lemongrass to cows reduces their emissions, other studies found this connection years ago. And it’s not just lemongrass — seaweed and garlic have also been shown to be promising solutions to curbing cows’ gassy reputations. On the plus side, Burger King is publishing its lemongrass research and feed formula online, inviting other companies to take advantage of it.

The company admits it will take time to make its new “cow menu” a “mainstream reality” beyond the reduced-methane burger pilot program. Burger King’s next steps are to work with suppliers to “validate the reduction in methane emissions and to understand the commercial and long-term livability of this new sustainable diet.”

This isn’t the first time BK has tried to clean up its environmental reputation. Meatless Impossible Whoppers debuted on their menus last year, the company is making efforts to reduce plastic waste generated by its Jr. Meal toys, and it’s working with CDP, an international nonprofit that runs a public environmental disclosure database, to eliminate deforestation in its supply chain.

But without any public accounting of Burger King’s carbon footprint, there’s really no way to gauge whether its low-methane burger could move the needle, or if it’s just a load of cow dung