There’s nary a mention of farming in the new Paris climate change agreement, which may seem like a bit of an oversight to food policy nerds (I know of what I speak). As Politico food and ag reporter Helena Bottemiller Evich points out, agriculture isn’t explicitly mentioned in the agreement:

The words ‘agriculture’ ‘farm’ or ‘soil’ do not appear in the 31-page text, and food comes up only in the context of the importance of global food security. The pact calls for ‘increasing the ability to adapt to the adverse impacts of climate change and foster climate resilience and low greenhouse gas emissions development in a manner that does not threaten food production.’

To be fair, the words “transportation,” “electricity,” and “methane” don’t appear, either. “Energy” is mentioned twice and “carbon” just four times. It’s a very general document, not a detailed prescription for bringing down the Earth’s fever.

If you look beyond the document itself, however, the Paris meeting did yield a truly exciting agenda for getting farms to suck up carbon and improve food security at the same time. That potential fix lies in the soil: Soil microorganisms can absorb tons of carbon from the atmosphere, and in doing so they make the soil richer, more productive, and better at holding on to moisture.

During the Paris negotiations, the French government (along with a suite of partners) launched an initiative called “4 per 1000” — a reference to the calculation that, if we could increase the amount of carbon going into the soil by 4 percent each year, it would cancel out human emissions and stop the rise of atmospheric carbon dioxide. Achieving this would also be … I’m just going to go ahead and say “impossible.” But that’s not the point: The point is to show that even a small increase in the amount of carbon taken up by soils could have a profound impact. 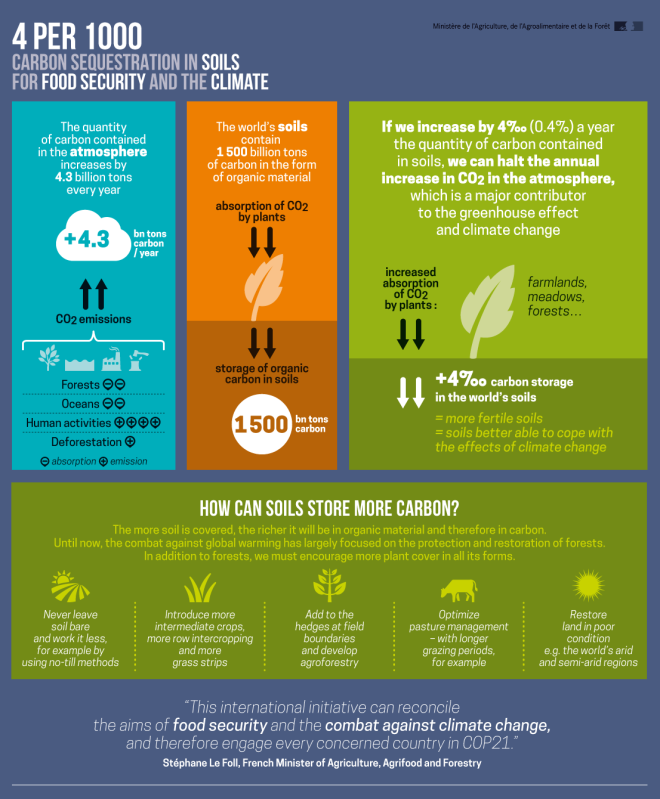 The tricky thing about soil sequestration is that no one knows how to get soil to increase its carbon uptake consistently and then hold on to all of it. The strategies proposed by different groups tend to be self-serving. That is, many of the statements you are likely to see about soil and carbon are more political than scientific. Soil can’t speak for itself, so there’s nothing to stop various agricultural interests from saying that the soil endorses their particular brand of farming.

Biotech boosters point to no-till farming (optimized with herbicide-tolerant crops from the biotech industry) as the solution: If farmers don’t disturb the soil with tillage, they say, soil biology has a chance to develop, and it can better hold on to carbon. Organic boosters, on the other hand, point out that their style of farming is oriented directly at building up the organic material (i.e. carbon) in the soil and often say that the solution is for everyone to go organic. Neither is likely to be the whole truth. No-till by itself doesn’t always get carbon into the soil. And organic farming — while great for building up soil — prohibits synthetic fertilizers, which, used in the right proportions, are likely to be a key to sequestering carbon in the soil, especially if we don’t want to further expand farmland. So we have a hugely promising field of study, with limited science, and lots of spin.

That’s why it’s so exciting that this issue is getting high-profile attention. That leads to funding, and funding leads to better evidence. As part of the 4 per 1000 initiative, the CGIAR Consortium of international agricultural research centers proposed conducting a five-year, $225 million program with the goal of sequestering 25 megatons of carbon, while improving farm yields by 20 percent.

I’d have liked to see these kinds of research goals written into, and funded by, the climate agreement itself. But I’ll happily settle for some solid science on how farmers could improve their soil’s ability to draw carbon out of the atmosphere. Farming may not be in the climate agreement, but it did get some welcome attention in Paris.

How U.S. negotiators made the Paris climate deal Republican-proof