At 11:30 p.m. Paris time, a small group of White House officials dashed into a temporary plywood hut in the exhibition hall where, a few hours earlier, a historic legal agreement to cut emissions causing climate change was secured. They were just in time to catch a live feed of Barack Obama declaring “a turning point for the world.”

These were the officials who helped set the U.S. negotiating position for the talks — or, perhaps more accurately, helped craft the deal according to U.S. specifications in order to insulate Obama and the agreement from attacks.

When it came to Republicans in Congress, they wanted the agreement to be bulletproof. That was no easy feat in a negotiation over an immensely complicated challenge involving nearly 200 countries, and half a dozen rival negotiating blocs.

“We met the moment,” Obama said in his address. The Paris agreement on its own would not end climate change, he said, but “this agreement will help delay or avoid some of the worst consequences of climate change, and will pave the way for even more progress, in successive stages, over the coming years.”

Nonetheless, the fight over the deal began even before French workers could finish dismantling the conference site. Mitch McConnell, the Senate majority leader, led the attack for Republicans.

“The president is making promises he can’t keep, writing checks he can’t cash, and stepping over the middle class to take credit for an ‘agreement’ that is subject to being shredded in 13 months,” McConnell said.

The deal reached in Paris set goals to limit warming, phase out carbon emissions by the middle of the century, help poor countries realign their economies, and review their progress toward hitting those targets at regular intervals.

Sen. James Inhofe (R-Okla.), the chair of the Senate Environment and Public Works Committee, who holds views on global warming outside the scientific mainstream, said he would continue to scrutinize Obama’s climate agenda. Inhofe and other committee chairs in Congress have held hearings seeking to undermine the Paris climate meeting and the work of government scientific agencies.

“The United States is not legally bound to any agreement setting emissions targets or any financial commitment to it without approval by Congress,” Inhofe said in a statement.

Meanwhile, campaigners plan to use the agreement to push Obama to stop Congress lifting a ban on oil exports in the budget bill and to phase out fossil fuel extraction on public lands.

But as administration officials pointed out after the deal was done, the agreement reached in Paris was constructed with a view to making it safe from Republican attacks — which was one reason negotiations were so difficult.

The U.S. needed a very particular kind of deal — and it required immense political capital to achieve it.

Even until the final moments, Obama and the French president, François Hollande, were spending that capital to get to a deal, telephoning world leaders for support. When final approval was held up for an hour over typos and a dispute over a single verb — shall or should — Hollande telephoned Narendra Modi, India’s prime minister, to assure him the last-minute glitches would be fixed.

Obama met the Chinese president, Xi Jinping, at the beginning of the talks and the two leaders were in regular telephone contact throughout the meeting, administration officials said.

When U.S. officials realized Paul Oquist, Nicaragua’s delegate, planned to deliver a fiery speech denouncing the deal, Secretary of State John Kerry and Raúl Castro, the Cuban leader, telephoned Managua to make sure Oquist spoke after the agreement was adopted, when it would in effect be too late.

“This agreement was right in the zone where it needed to be,” an administration official said. “There was significant U.S. involvement in the shaping and architecture.”

Campaigners say the sheer fact of the deal — and its support by nearly 200 countries — will force Republicans to recalibrate their opposition to Obama’s climate policy.

“I think Republicans will have to continue to fight over fossil fuels and defend that industry in a more technical way,” said John Coequyt, international climate campaigner for the Sierra Club.

“They will be less able to fight over climate change than they were before and they will retreat in a process fight over defending the coal industry and the oil and gas industry.”

Business leaders including Michael Bloomberg, the former New York mayor, have been actively engaged in getting companies on side with the deal. They are also expected to put up a strong defense.

Meanwhile, campaign groups such as 350.org, which led the successful fight against the Keystone XL pipeline, will be pressing Obama to shut down fossil fuel extraction in U.S. public lands and waters.

Bill McKibben, the founder of 350.org, said the agreement would kick off a new wave of activism targeted against big carbon reserves. He said groups would also step up the pressure on Obama.

“It is absurd we are having to have this fight and it is absurd that the administration, even while it is championing these negotiations, hasn’t yet materialized the message of these negotiations,” he said. “If anyone is serious about 2C, you have to understand you can’t be doing on the one hand or on the other hand anymore.”

U.S. officials see the Paris agreement as the result of a long, slow rebuild of Obama’s climate strategy — after the chaotic end of the Copenhagen summit in 2009 and the death of cap-and-trade legislation in Congress a year later.

In 2013, Obama declared the fight against climate change one of the top priorities of his second term and began using his executive powers far more aggressively to reduce U.S. emissions, including rules cutting pollution from power plants.

Officials say Obama’s decision to elevate climate change to a top-tier issue, along with such domestic initiatives — cranked out every few days over the course of the year — helped establish trust that the U.S. was serious about cutting emissions.

The relationship with China “changed the paradigm of what happened in Copenhagen,” Kerry told reporters after the deal. “It was a sea change.”

The U.S. was also adamant any climate agreement be universal, with all countries taking steps to reduce greenhouse gas emissions. But those commitments would be voluntary, with countries offering their own climate plans.

Early last week, Todd Stern, the State Department climate envoy, crowded on to a stage with leaders from the Marshall Islands and Mexico, Gambia and Germany, and declared the U.S. was part of a “high-ambition coalition” that wanted a strong agreement in Paris. 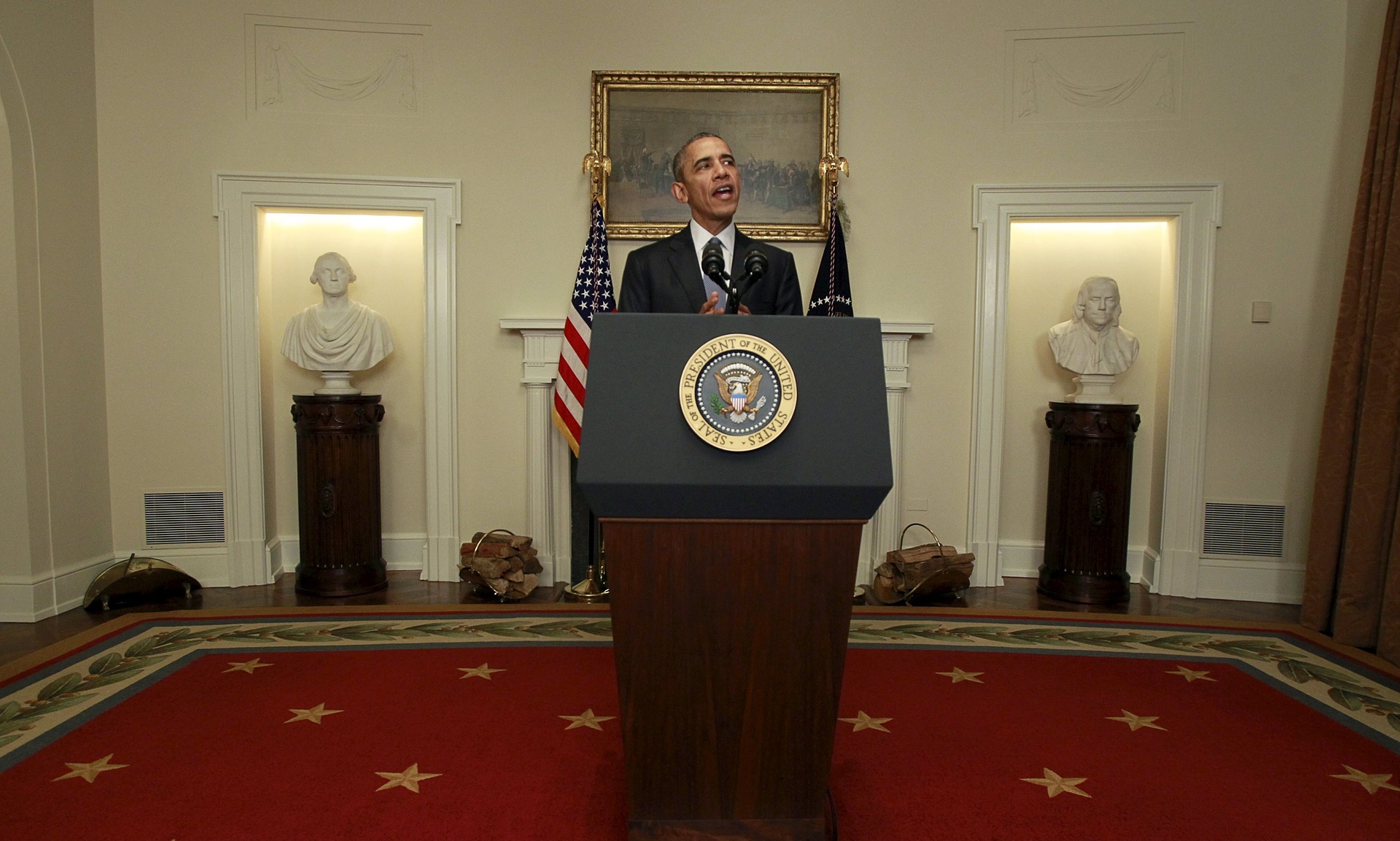 The all-in approach was a must, said Nat Keohane, who follows the climate negotiations for the Environmental Defense Fund.

“The biggest issue the U.S. had with the Kyoto Protocol was that the U.S. was taking on a burden that developing countries didn’t have to,” he said. “That’s a big thing.”

Under U.S. insistence, the 31-page agreement was explicitly crafted to exclude emissions reductions targets and finance from the legally binding parts of the deal. Other areas of the deal, including five-year review cycles, do carry legal force. That would free Obama from having to submit the deal to Congress.

The other exclusion zone was any clause in the agreement that would expose the U.S. to liability and compensation claims for causing climate change.

The U.S. — and European — position was a huge disappointment for the low-lying and small island states, which argued they needed recognition that their countries could pay the ultimate price for climate change in terms of land loss and migration.

“The idea of even discussing loss and damage now or in the future was off limits. The Americans told us it would kill the COP,” said Leisha Beardmore, chief negotiator for the Seychelles. “They have always been telling us: ‘Don’t even say that.’”

But that was the price of the deal.