There’s so much confusion about California’s drought, and a lot of my colleagues in the media, I’m sorry to say, have been amplifying that confusion. The proliferation of stories showing how much water various food products use implies that people should be eating water-thrifty foods — but that would do precisely nothing to fix the problem. The real solutions are within reach (I’ll get to those), but they will require the hard work of politics to achieve, rather than simplistic, consumer-focused fixes.

A recent survey from the Public Policy Institute of California found that, for the first time in the history of its polling, Californians say drought is the most important state issue, and 69 percent of Californians say water supply is a big problem in their part of the state. 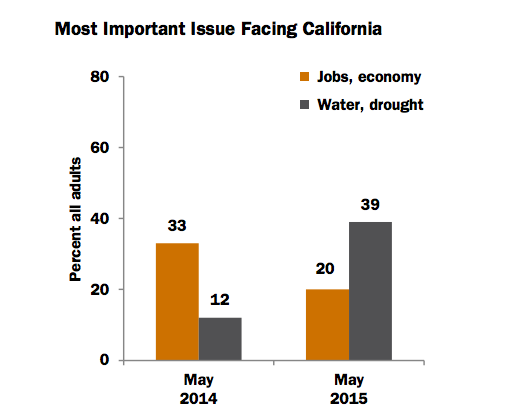 When there’s this kind of concern about an issue, we in the media hustle to provide information. And there’s an obvious set of data for us to transform into engaging infographics: The New York Times, The Los Angeles Times, Wired, and, er, Grist, along with many others, have been explaining how much water it takes to produce various food items. There’s nothing wrong with these until outlets try to spin that raw, context-less data into buzzy proscriptions about what to order at a restaurant. (In our defense, we tried to present the data without focusing on the California drought, and when Grist’s science editor Amelia Urry went on TV to talk about it she did a great job of pointing out that context mattered and “skipping that sirloin or chocolate cake isn’t going to put water back into depleted aquifers.”)

Here are the problems with trying to diet our way out of drought:

There are lots of reasons a farmer chooses a crop

Many “water guzzling” crops make sense if you consider a farmer’s ecological context.

The Los Angeles Times pointed out that lentils are “a thirsty food.” True, they take more water than other crops to grow. But they are also ideally suited to drought-prone regions. As Liz Carlisle, author of Lentil Underground, writes: Lentils “are content without irrigation, even in areas that frequently see droughts. Lentils grow when it rains, and pause their growth cycle when it’s dry. Instead of overshooting and wilting, they stage their growth to fit their water resource, and they stay low to the ground rather than bolting up in flamboyant amber waves.”

Then there’s alfalfa, which also sips a lot of water. But alfalfa is a great choice for farmers worried that they might not get their water, because if you stop irrigating, it simply goes dormant — then it springs back to life when the rains return. It’s also cheap: One planting can produce hay for six years, so it’s not a not a mortal wound if a farmer has to give up a few cuttings. Both alfalfa and lentils fix their own nitrogen, which makes them great rotation crops for farmers who want to reduce pests and diversify their farms.

Consider rice, another supposed water guzzler. Rice takes tons of water, because the fields are flooded. But that water doesn’t simply disappear — it seeps into the ground, and some of it goes back into the rivers. The water table in northern California is in good shape, in part because of all the rice paddies recharging the aquifers. Rice farmers flood their fields as a means of weed control, which allows them to dramatically reduce their pesticide use. And those fields provide important habitat for birds and fish — so important that the USDA’s Natural Resource Conservation Service is offering farmers money to continue flooding their fields to give migrating waterfowl a chance to survive the drought.

The value of water depends on location

If you’ve been paying attention to these factoids, you’ve learned that it takes a lot of water to grow beef. But knowing that does nothing to differentiate the cattle raised in the middle of a drought from the cattle raised by a rancher in a place with plentiful water, like Montana or North Dakota. It also hides the fact that California cattle subsist primarily on grain freighted in from the soggy Midwest. If you want to count the virtual water flowing out of the state, you also should count all the millions of gallons coming in every day on the rails.

The water footprint of beef also depends on what the beeves eat. In the hilly grasslands, where it’s often hard to grow crops, cattle can be an important part of a ranch’s ecosystem: They clear the grass before it has a chance to go to seed and oxidize, and they fertilize as they go. Remove the animals, and there may not much to do with the land except build houses.

There are other reasons to eat less meat, and I’ve suggested in the past that it would be environmentally beneficial to reduce global meat consumption. But it’s not a solution for California’s drought. We shouldn’t be asking individual eaters to outsmart a complex global market with every purchase.

Farmers chose to grow the crops that will make them a living. If people stop eating California avocados and almonds and rice, it would make it harder to farm in the state. It would speed the conversion of farmland to suburbs and golf courses. And it would probably shift a lot of production overseas: More tomatoes might come from Chile than California.

An export ban would be similarly ineffective. Exports are the most offensive aspect of California agriculture to many: It feels crazy to be turning water into alfalfa and then shipping that to China in the middle of the drought. But the fact is, setting up some kind of trade barrier — even if it were politically possible — wouldn’t put more water into rivers. Farmers still have legal control over a lot of water, and they would put it to use. If we banned almonds, or stopped selling rice to Asia, the farmers would just use that water for something else.

Instead of asking eaters to wade through this complexity every time they pick up a fork, we need policies that make water expensive for farmers in places where it’s scarce. A market price for water would simply eliminate inefficient crops.

And, in fact, California already has a functioning water market … with one massive market failure: It’s still legal for landowners to pump as much water out of their ground as they can in many places. And it’s that market failure that is causing the true shortages in poor farming towns.

However, the state is on its way to correcting that market failure. The legislature regulated groundwater last year, and water districts around the state are currently figuring out how to make sure they put as much water into the ground during wet years as they take out in dry years.

It won’t fix the inefficient and environmentally damaging way the state moves water through the Sacramento-San Joaquin Delta (the delta is the swamp that mires politicians for life). And it won’t save beleaguered fish, which are really suffering in the drought. Several policy wonks have suggested adding a tax to water use to discourage overuse and help pay for fixes to these environmental problems — they are also market failures, and a tax could bring them into the system.

But, that’s not a satisfying solution!

Politics and policy are not as exciting as a technical fix, but in this case they are the only thing that will actually work. You could try for a complete overhaul of the water rights system, but the experts tell me that just isn’t going to happen.

I just want a future that doesn’t suck for my daughters as they grow up in California. I’d like them to have healthy, rushing rivers to swim in; a diversity of fish species to marvel at, and eat; clean drinking water, available to everyone, equitably; and then, way down on the list, I’d like them to grow up in a state that still has farms, and produces great food.

All of that is within reach — if California can just implement its groundwater law. Instead of haphazardly picking foods to boycott or stockading the almond-eaters, let’s let farmers read the market signals and grow what’s appropriate for their circumstances. Then, when water is scarce and prices rise, farmers may find it’s most profitable to sell their water to serve rivers, cities, and fish.

Should I replace my brown lawn with artificial turf?