If you grew up eating school lunches, you probably think of them as gross: soggy vegetables, canned fruits, and mystery meats. In a bid to fix that, the U.S. Department of Agriculture made big changes to nutrition standards in 2012. But if you tune in to what young people have to say on social media, plenty of school lunches remain unappetizing — and sometimes plain inedible.

That’s why what’s happening in Riverside, Calif., is so remarkable: A school district where seven out of 10 students are at risk of hunger has managed to create delicious meals, all while stimulating the local economy. And it’s an effort largely led by people of color.

For 13 years, the driving force behind these changes has been a Compton, Calif., native named Rodney Taylor, who headed up Riverside’s nutrition services.

When Taylor took charge, he inherited a central kitchen that was in the red, and he had few resources to feed the district’s hungry students. But Taylor was committed to make healthy food accessible and appealing.

He soon noted that the city had small farmers whose crops weren’t always harvested because doing so wouldn’t guarantee a profit. Taylor saw an opportunity: By working with local and regional farmers, he’d get fresher produce and also save on distribution fees.

Taylor worked to take care of employees — even at the part-time cafeteria level — and listened to their ideas. In 2005, district field operations supervisor Priscilla Friend wanted to help create a salad bar pilot program (this was eight years ahead of the USDA’s national salad bar program). Ten years later, that experiment grew to become the standard of school lunch in all of the district’s elementary schools: fresh (never frozen!), local (and, when necessary, regional — reaching as far as Central California) vegetables and fruits, balanced by nuts and dairy choices.

Riverside’s goal is the popular yet radical idea of making the healthy choice the easy choice, but in a way that also feels a little luxurious for the students. Nutrition services employees highlight that they want to provide a fine dining experience for the district’s 43,000 or so students, so that kids actually look forward to school lunch for more than a break from the classroom. Small changes to the lunch line — like putting the salad bar first, before children hit the hot options — encourage students to choose and eat fresh foods. 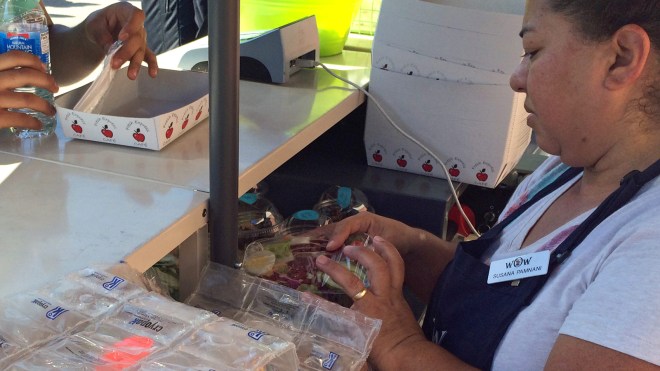 At Washington Elementary School this week, a tiny first grader who was getting help piling food on her tray shook her head and, in Spanish, said, “I don’t want apples; I want grapes.” In a school district that’s 76 percent students of color (60 percent Latino) and where 68 percent of children are at risk for hunger, it’s extraordinary to see a 6-year-old encouraged to make that choice on the lunch line — and perhaps just as remarkable that she ate nearly everything she chose that day.

Not every child is as enthusiastic about a healthy lunch, of course; and many who aren’t wind up hardly eating much at all. The district’s nutrition specialist, Morgan McGhee, says it’s still vital to give kids who wouldn’t otherwise have the option a choice about what they eat.

“A school district can be an agent of change,” says McGhee — an African-American who first found out about Riverside when she interned there with Loma Linda University for just a couple of months two years ago, and came back after a brief stint working in Texas.

Of course, even given Riverside’s success, there are challenges. The salad bar line, full of little children making individual choices about their fresh foods, can be slow — and that could worry test-driven educators who’d like to see every spare minute available for study.

Another big challenge is that children’s tastes evolve. It’s much easier to get a first-grader excited to “put a rainbow in your tummy!” than it is to get middle and high schoolers to even consider eating anything green. Yet the students who themselves went through the pilot salad bar program years ago, as well as their parents, agitated for fresh food at their new schools.

“At Sierra Middle School, they did a student consult,” explains Priscilla Friend, who first piloted the salad bar program. They asked to meet with Rodney Taylor, who pointed them to executive chef Ryan Douglass in order to develop a new line of food featuring local farmers’ produce. Preteens demanding fresh foods? Yeah. That happened in Riverside. 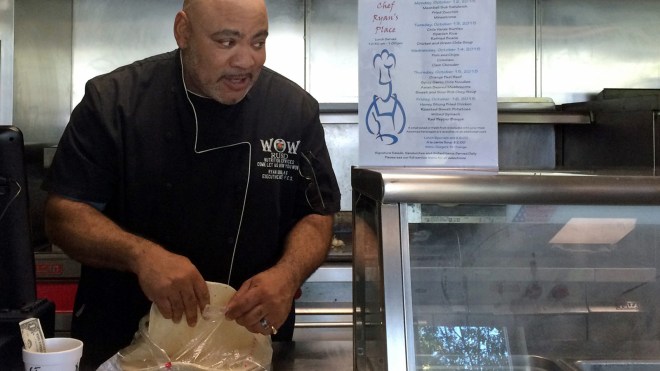 The result is called Fresh Express, which is one of six kinds of foods available daily for lunch at Riverside’s secondary schools. Lunch choices at schools like Poly High are set up sort of like you’d see at a mall. Students punch in their identification number and can then choose between what they want — Mexican, Asian, and Italian food are among them, with the choice of service on a fancy black plate or plain white tray. You can even get barbeque: tasty barbeque you’d actually want to eat. In order to avoid too many long lines in the one food court-like central location, the school also sets up individual stands across the campus, so that a student who’s far from the main cafeteria can always get something just a few yards away.

Today, the Riverside program faces a transition at the top: Taylor was recently recruited by Virginia’s Fairfax County school system, and last month was his final one in Riverside. While it’s likely that someone who shares Taylor’s vision will fill his shoes, other district positions can heavily influence and potentially even cut back the nutrition services’ unique program. Riverside is reimbursed up to $3.07 per school lunch (the bulk of that, $2.67, comes from the USDA, the rest from the state of California). Less healthy processed food can be cheaper than the salad bar produce, which means the incentive to save money could drive a powerful school board member to push to cut the program.

That’s why Riverside’s nutrition services department has worked so hard on balancing its books. Although Taylor inherited a central kitchen that was in debt, he turned that around by thinking big. Riverside’s central kitchen now offers fresh lunches to the district’s teachers and school staff. That program is headed by executive chef Douglass, who’s also created a catering service that provides food for district functions, as well as for private companies or even families celebrating quinceñeras. The central kitchen is located in Riverside’s industrial zone, which isn’t exactly brimming with food options. So Douglass created Chef Ryan’s Place, where local workers come to eat lunch at a reasonable cost. (Full disclosure: I was treated to my pick — turkey on focaccia, along with fancy spa water — and it was absolutely delicious.) The profit generated by the central kitchen gets pumped back in to the school food program. 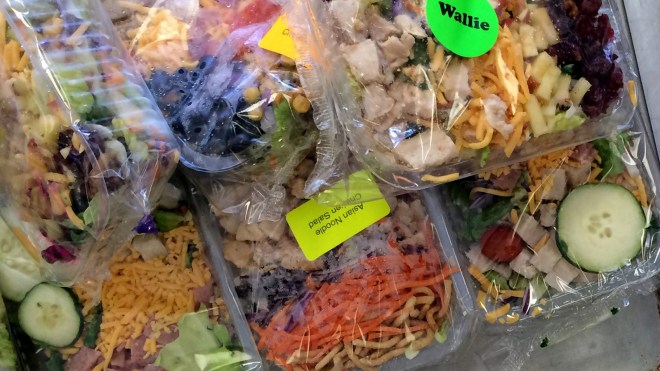 Some of the Fresh Express lunch choices available to students at Poly High School.Grist / Aura Bogado

And it’s making a profit to boot. Riverside expanded its services to include what it calls Super Snack, which is less of a snack, and more like a meal. By tapping into small California Department of Education food reimbursements, Super Snack seeks to provide additional food for children who might not otherwise get a chance to eat once they go home. Creating Super Snack has meant buying even more produce from local farmers, and employing seven full-time (with benefits!) kitchen employees over the last year.

“It’s more opportunities for more people to have more full-time positions to prep, wash, and deliver the food,” says assistant central kitchen manager Ramiro Martin. Martin himself grew up on processed school food and, after 20 years in the private restaurant management sector, he was so impressed by what Riverside is doing that he decided to make a switch just four months ago.

Super Snack, Chef Ryan’s Place, Fresh Express — all these innovations add up, but Riverside’s most important work is with the tiniest of its students. And the district is tackling it with plenty of sensitivity toward culture. Morgan McGhee, the intern-turned-nutrition specialist, holds classes for children as well as parents. Originally from Alabama, McGhee has sharpened her Spanish language skills and brought in Spanish-language facilitators for detailed lessons, like how to read a nutrition label in English, which parents don’t always speak or read.

Riverside coordinates with a local food bank to bring in fresh produce, as well as eggs and even seeds, to schools; elementary schools get a big delivery once a month. But even this could pose an obstacle: Most Latinos don’t regularly consume, or even know how to cook, certain produce, like eggplant. So McGhee sets up cooking and tasting lessons.

“Those people who lead the rates in highest obesity in heart disease, cancer — you name it — are people of color,” says McGhee. “It shouldn’t matter what you look like. Every kid should have the opportunity to eat well, and to have a fine dining experience.”

That kind of approach is what’s got Riverside winning. The school district is the 15th largest in the state, and its population of approximately 43,000 students makes it kind of perfect for good school food: It’s big enough that it can generate revenue as well as provide good-paying jobs while supporting local farmers, and it’s not so big that it would seem impossible to even attempt changes. As salad bar programs lose favor in some districts, this part of California’s Inland Empire has set a model for how to do school food right.

OF COURSE you want to plant a winter garden! Here’s how to get started