Wish you could fertilize crops with pee? Urine luck 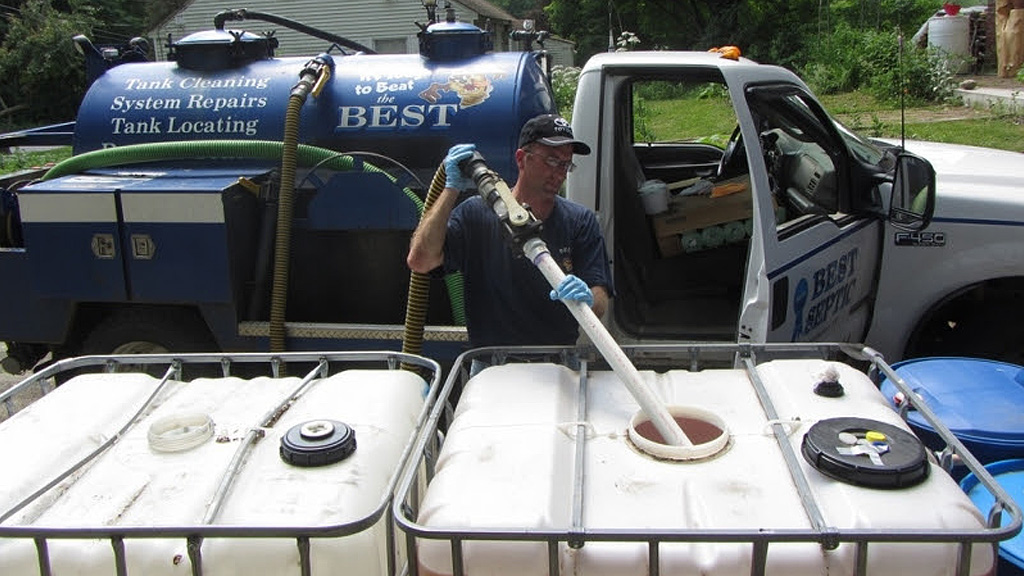 Seth True of Best Septic Service, LLC, pumps urine from a 275-gallon tank for transfer to the farm. A family of three can produce this much urine in eight months. Abe Noe-Hays, Rich Earth Institute
Food

Wish you could fertilize crops with pee? Urine luck

“When are you going to start bringing pee out to the farm?” Jay Bailey, a local farmer, asked Abe Noe-Hays when they ran into each other at the hardware store in Battleboro, Vt. “Um, how about now?

Noe-Hays had just teamed up with Kim Nace to form the Rich Earth Institute, an organization that separates out pee to use as fertilizer for local farms —  “peecycling” to those in the know. All they needed was a test field. “[Using urine as fertilizer] is such low-hanging fruit in terms of sustainability,” Nace says. ”There’s so much energy wasted at fertilizer plants and water treatment plants. It’s kind of a no-brainer.”

Now they’re two years into running the first permitted, community-scale urine recycling program in the country. 175 volunteers collect their urine in five-gallon jugs and drop it off at a “urine depot” in Nace’s front yard. From there, Brattleboro Department of Public Works septic haulers take it to Bailey’s farm, where it’s pasteurized and sprinkled on hay fields. In 2012 they collected 600 gallons, this summer they’re expecting to top 6,000.

Their desire to start peecycling was two-fold: They saw unnecessary chemical fertilizer being created, and they saw energy and water being wasted at water treatment to scrub those same chemicals out of the water. Using urine as a fertilizer eliminated both of those problems and closed the loop between consumption and waste: You pee out the same nutrients you take in when you eat. It also helps that urine works really well as a fertilizer. “It’s an easy point of entry for recycling human waste without violating too many taboos, and it has most of the nutrients; 85 percent of good stuff is in the urine,” Noe-Hays says.

The good stuff is nitrogen, phosphorous, and potassium. Those same substances that comprise chemical fertilizer are secreted in your urine, because they’re in all the foods you eat. Because they’re basic elements, your body doesn’t break them down, so they get flushed out through your kidneys and redeposited in your toilet — or in a jug bound for Bailey’s farm.

Urine recycling is common in France and Sweden, and Nepalese studies have tracked the efficacy of using urine to fertilize sweet peppers, but the Rich Earth Institute’s farm is the first of its kind in the U.S. They’ve had to work with state and local legislature to set up rules and guidelines, and to fight the preconceived ick factor of using human waste to grow food. “It helps that Vermont is a very small state,” she says. “There are three regulators and we know them all.”

Once they figured out the logistical and legal loopholes, the next step was getting the pee. Nace says this was actually easier and less awkward than she thought it would be. They knocked on doors around town and gave a power point about urine as fertilizer, nutrient recapture, and how to separate your pee. They quickly earned a lot of converts. “For each person who thinks it gross, there are way more that like the idea,“ Nace says. “It’s really empowering for people. We’re always trying to do less, drive less, consume less, and here is something that we do everyday, which is part of being alive, that also gives back to the earth.”

As far as the gross factor goes, urine itself is sterile — you can put diluted pee on your houseplants, Nace says — but it can become contaminated by fecal particles. The Rich Earth team making strides to set up a system that’s clean and replicable, so they pasteurize the urine in solar heaters on the farm. Then, with the help of volunteers and interns, they sprinkle it on rows of crops. They’ve experimented with the pee-to-water ratio for the perfect fertilizer. They started with 3-to-1, then tried 1-to-1, and now they’re spreading straight pee, because it works just as well, and they don’t have to waste any water to dilute it.

They’re primarily growing hay for animal consumption, but they’re also working with the EPA on vegetable studies to show that fertilizing with urine won’t have any negative impacts on human food. So far the veggie tissue samples have been clean.

And they’re expanding: This summer, three more farms are onboard. “We have a waiting list — it just depends on how much urine we get,” Noe-Hays says.” They’re also working with the EPA * to track how soil absorbs things like pharmaceuticals, which are secreted in urine but not taken out at wastewater treatment plants. “It’s future technology,”  Noe-Hays says. “There’s no well-traveled path, so we really get to explore a lot and experiment.”

For the future, they’re trying to scale up by creating a program that other towns and states can copy. As pioneers in implementing peecycling, they’re breaking ground on a lot of regulations and baselines. They’re outsourcing, too: They’ve teamed with the Brattleboro Department of Public Works to bring urine-separating toilets to farmers markets and concerts. That includes writing policy and working with regional and national regulators to make public peecycling feasible.

But they don’t plan to stop at pee. Noe-Hays is ready to push the gross factor even further by trying to source solid waste as a nutrient stream, too. But first, Noe-Hayes knows making the Brattleboro operation repeatable is the first step to selling peecycling beyond Vermont borders.

“What I foresee is a robust and regional recycling system that can be replicable and understood. Then it can grow to Vermont, then throughout the country,” Noe-Hays says. “At the national level we’d like to see a new classification for urine as a substance. And this isn’t the end of it — we know that people [also] poop.”

*Correction: The CDC isn’t a part of the EPA study, as a prior version of this article suggested. The writer has been sentenced to maskless urine-spill cleanup at the CDC.