David Tilman saw the assertion repeated over and over: A healthier diet is also good for the environment. As a skeptical scientist, he started to wonder: Is that really true? If so, how true? In what specific ways?

Tilman, an ecologist with the University of Minnesota’s Institute on the Environment, spent two years researching this idea, gathering data and doing analyses with graduate student Michael Clark. Along the way, he stopped eating desserts and became a pescatarian — which should tell you something about what he was learning.

The environmental problems stem mostly from the rise in meat consumption. However, Tilman and Clark noted that “when sustainably grazed on lands unsuitable for cropping and fed crop residues, ruminant dairy and meat production can increase food security, dietary quality, and provide environmental benefits via nutrient cycling.”

But the most obvious problem with the Western diet, for both health and the environment, is that “people are just eating too many calories,” Tilman said. We could cut the carbon intensity of our diets by 25 percent by simply reducing the calories we eat by 25 percent — which would bring the average down to the level we actually need. 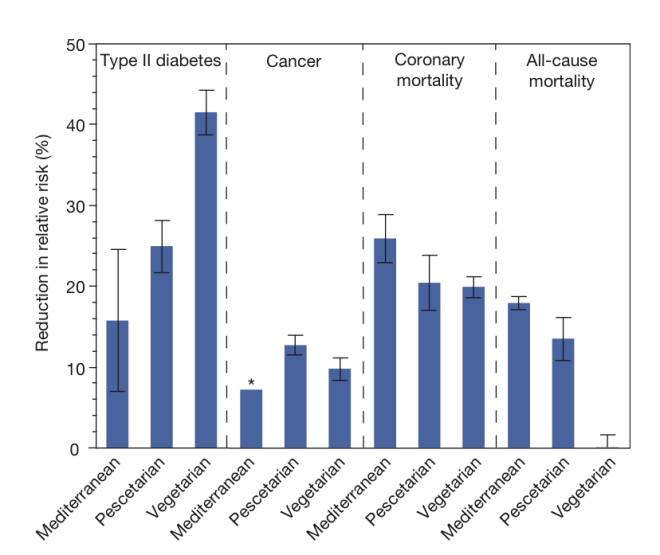 The health effects of the Western diet are consistently troubling wherever it spreads. “In China, for instance, as incomes increased and diets changed, the incidence of type II diabetes increased from 1 percent of its population in 1980 to 10 percent in 2008,” Tilman and Clark wrote. India is the exception that proves the rule: Because there are strong traditions supporting vegetarian food, meat consumption has not grown along with rising income in India.

This paper provides a clear goal: Decouple affluence from the Western diet. But how do you get there, I asked Tilman: What’s the first step?

We’re probably not going to legislate diets, he said. Economists like to tax harmful things to discourage them, but so far people haven’t been that excited about putting taxes on their own food. That leaves education: teaching people to seek out healthy food and showing them that it can taste good. “The only good solution is going to be delicious, healthy food,” Tilman said.

There’s hope. Several big food corporations are working to meet the growing demand for healthy food that’s yummy and has a lower impact on the environment, he said. Tilman would like to see an international competition of recipes that meet this criteria — a sort of Nobel Prize for food. “I think a generation from now, we could have a major change in diets,” he said.

If that change in diets went hand in hand with a wise intensification of agriculture in low-yield areas, less food wastage, and more efficiency in the use of animal feed, fertilizer, and irrigation, we’d see big reductions in greenhouse gas emissions and water pollution, according to the paper.

This research takes that old line — we have seen the enemy and it is us — and makes it more specific. Not every part of the human appetite is disastrously destructive; it’s the sweet tooth and the meat tooth that we really have to watch.