Deforestation, oil spills, and coronavirus: Crises converge in the Amazon 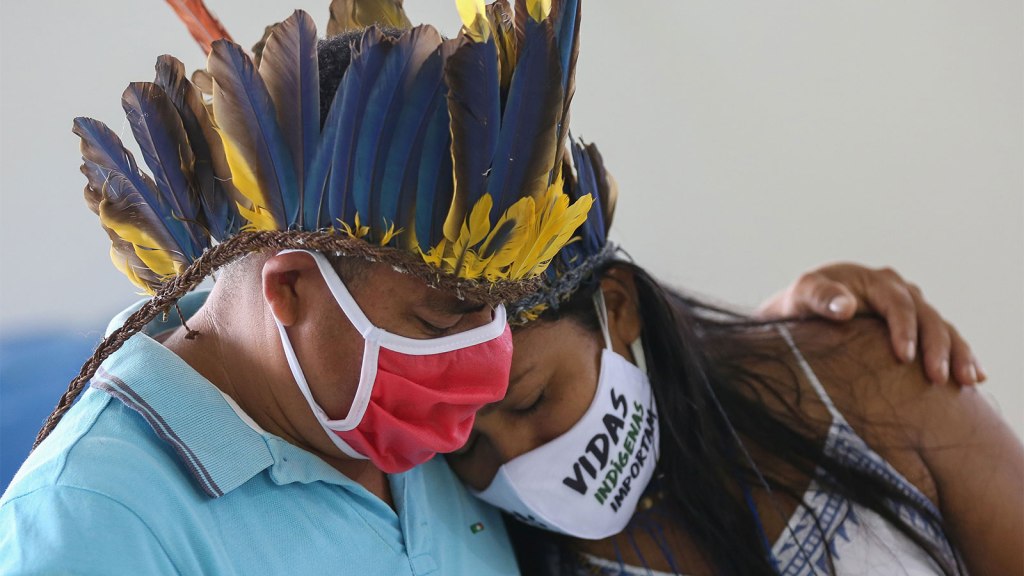 MICHAEL DANTAS / AFP via Getty Images
THE FIRE THIS TIME

Deforestation, oil spills, and coronavirus: Crises converge in the Amazon

Brazil recently became the country with the second highest number of documented COVID-19 cases in the world, trailing only the United States. Though it still lags its North American neighbor in this raw total, Brazil’s daily number of reported deaths was roughly double that seen in the U.S. this week. The latest data show that the country has suffered roughly 400,000 confirmed cases and 25,000 deaths.

Early reports suggest that Brazil’s indigenous peoples are being especially hard hit by the virus. According to the Articulation of Indigenous Peoples of Brazil, an indigenous rights organization, the mortality rate among this population of nearly one million is double that experienced in Brazil overall. (The government has reported a far lower rate, but its figures only account for a much narrower sliver of the country’s indigenous population, according to the organization.)

It’s not just Brazil. The entire Amazon region, which ecompasses parts of Peru, Colombia, and Bolivia as well, is becoming a hotbed for the novel coronavirus. According to the Coordinator of the Indigenous Organizations of the Amazon Basin (COICA), as of Tuesday the region has seen an estimated 2,278 positive cases and 504 deaths across approximately 73 different Amazon indigenous nations, suggesting a sobering mortality rate. A significant chunk of these indigenous case and death totals are not included in the World Health Organization’s figures, according to COICA, due to government undercounting. But COICA also believes that even their own estimates do not give the full picture.

“It’s important to note that such data is very conservative since there are still several limitations to get a full picture of the real extent of the crisis in remote areas,” said Oscar Soria, campaign director for Avaaz, a nonprofit working with COICA to advocate for global action on indigenous rights and climate change. Those limitations include the extreme remoteness of many indigenous territories, as well as a lack of testing kits and access to healthcare.

In the Umariacu village near the border of Peru and Colombia, the first three of Brazil’s COVID-19 deaths were indigenous elders, who were evidently infected by younger tribe members who left the village to collect government assistance payments and trade fish for other food, according to the Associated Press. In the village of Tres Unidos — which is five hours by boat from Manaus, the country’s hardest-hit major city per capita — indigenous residents banned all visitors from entering their territory, in hopes that isolation would keep them safe. But even that drastic measure couldn’t prevent the arrival of the devastating virus.

Despite the pandemic, environmental threats like mining and logging persist across the Amazon. In fact, deforestation in the Brazilian Amazon, which accounts for two-thirds of the rainforest’s total area, has not let up since the onset of the pandemic, according to data released early this month. The yearlong period ending April 30 saw the most accumulated annual deforestation since data collection began in 2007. Now, the region’s environmental land defenders are struggling to simultaneously protect the forest and keep the novel coronavirus at bay.

Deforestation in Brazil has surged since President Jair Bolsonaro assumed office in January 2019. Bolsonaro, who critics have dubbed the “Trump of the Tropics,” has weakened environmental regulations while in office. The Brazilian president has also granted amnesty for fines for illegal deforestation, slashed budgets for environmental law enforcement, criticized his own administration’s scientists, and used indigenous people and environmental NGOs as scapegoats for last year’s massive fires in the Amazon — fires his administration has been accused of tacitly supporting. (Bolsonaro also made headlines for ignoring social distancing measures and firing officials who criticized his tactics at the beginning of the coronavirus outbreak.)

“Environmental threats continue, and deforestation is increasing; cocoa production in parts of the Amazon is increasing,” said Suzanne Pelletier, executive director of Rainforest Foundation US, during a press call early this month. “It’s exacerbating the problem of the pandemic in indigenous communities — because not only are they facing a public health threat, but they are also facing increasing environmental threats at the same time.”

Among these environmental threats are two oil pipelines that collapsed early last month in Ecuador, releasing roughly 15,000 barrels of oil into the Amazon’s waterways. As the COVID-19 pandemic makes clean water access even more essential to indigenous communities, the oil spill’s fallout is all the more threatening. Indigenous communities in the Ecuadorian Amazon have filed a lawsuit against their national government and the oil companies involved, accusing them not promptly alerting residents about the spill.

The Amazon rainforest houses at least 10 percent of the world’s biodiversity. Its trees also function as the planet’s lungs, sucking carbon out of the air and storing it — but that climate benefit is threatened as deforestation begins to release those stores. Last year’s massive fires ravaged vast swaths of the Amazon and exacerbated the region’s air pollution — an especially troubling development now that research is beginning to suggest a link between air pollution and the most severe COVID-19 outcomes.

Early this month, a coalition of groups including Rainforest Foundation US and COICA launched an Amazon Emergency Fund to provide indigenous peoples in Brazil and neighboring countries with resources like personal protective equipment, testing kits, and transportation to healthcare providers.

In countries like Guyana and Suriname, the funds can also spread awareness of ongoing problems that predate the pandemic, according to Sirito-Yana Aloema, president of the Organization of Natives in Suriname.

“In the Guianas, we have a problem with gold miners entering our country — and a lot of illegal loggers — during the pandemic,” he said. “We want to bring awareness to the indigenous people and use the funds for translation, transportation, and to improve our way of living during this emergency.”