Activists shut down these cancer-causing plants. COVID is bringing them back. 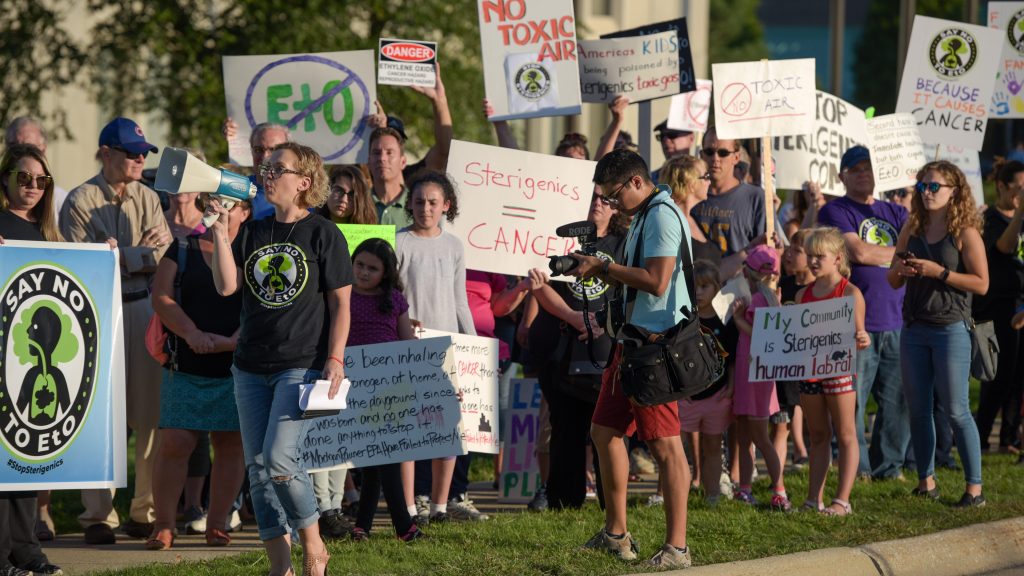 Activists shut down these cancer-causing plants. COVID is bringing them back.

Jeanne Hochhalter has had health problems since she was a teenager. First came the respiratory issues, then the gastrointestinal and endocrine troubles. But the heaviest blow came in 2013 when a doctor diagnosed her with breast cancer. Since then she’s endured 16 surgeries, as well as chemotherapy.

Hochhalter, a 52-year-old real estate agent who grew up in Burr Ridge, Illinois, 25 miles west of Chicago, is now in remission. She couldn’t chalk her cancer up to anything in particular until her mom returned from a town hall meeting in August 2018 with a pamphlet. It detailed the health problems associated with exposure to ethylene oxide, a chemical used to sterilize medical equipment. And a plant doing just that was located fewer than 5 miles away.

“My God, Jeanne, this could have your picture,” Hochhalter’s mom told her as she handed over the sheet. The plant, owned by the company Sterigenics and operating in Willowbrook, had been emitting huge amounts of the carcinogen, known as EtO, for three decades. “I was being continuously poisoned,” Hochhalter said.

An Environmental Protection Agency report published in 2016 listed the devastating health effects of exposure to ethylene oxide: a higher likelihood of developing cancers — including breast cancer, lymphoma, and leukemia — as well as a host of other health issues, like breathing problems and neurological effects. When the Chicago Tribune covered the latest update of the EPA’s National Air Toxics Assessment two years later, its story compared cancer rates in seven census tracts near the Willowbrook plant to areas in Louisiana’s notorious “Cancer Alley.” The article caused an uproar and prompted the town hall meeting Hochhalter’s mom attended. According to the assessment, the likelihood of getting cancer was 9 times higher than the national average in a census tract located close to the plant. Hochhalter had lived in that tract as a child.

“Epidemiologists did a very eloquent, clear study of this,” said Peter Orris, an expert on environmental exposures and chief of occupational and environmental medicine at the University of Illinois Hospital in Chicago, in reference to the EPA’s findings. “They came back saying the people living around there, their risk of breast cancer was off the wall.”

Subsequent analysis by the Illinois Department of Public Health would reveal a cancer cluster near Willowbrook, showing that its 19 cases of Hodgkin’s lymphoma in women occurring between 1995 and 2015 was nearly double what the county and state would have predicted. The census tract closest to the Sterigenics plant, where Hochhalter lived and worked for decades, also had nearly 10 percent more breast cancer cases than would have been expected. Hochhalter believed she had found the cause of her breast cancer.

Hochhalter and her neighbors would channel their outrage into a positive outcome for their community. They researched, organized, and protested, demanding the Sterigenics plant be shut down. They formed community groups like Stop Sterigenics and EtO Sleuths and pressured their elected officials. Illinois lawmakers passed legislation in June that requires each facility to limit its ethylene oxide emissions by 99.9 percent. Just over a year after the town hall, in September of 2019, the Willowbrook Sterigenics plant shuttered for good. Residents were elated.

“It just made us all feel very justified,” Hochhalter said. “No, we weren’t making this up, no this wasn’t political.”

But the fight against ethylene oxide-emitting facilities would soon become political, thanks to the coronavirus’s arrival in a country whose government was ill-prepared to fight off a global pandemic. With COVID cases on the rise and hospitals concerned about being deluged with patients, the sterilization plants were suddenly in demand to help bolster the supply of personal protective equipment — like N95 masks, which are needed to protect health care workers from COVID-positive patients. That’s despite warnings from scientists and government agencies about the facilities’ hazards to their surrounding communities — and health care workers.

The Willowbrook community’s success rippled through the state and then spread south. Members of a group in Waukegan, an hour north of Chicago, took aim at a Medline Industries sterilization facility they hoped to see shut down. Another Stop Sterigenics chapter in Cobb County, Georgia, just outside Atlanta, followed in Willowbrook’s footsteps and successfully pushed a plant to stop work.

Yet just as momentum was building to further curb ethylene oxide emissions throughout the U.S. — including legislation passed in the Georgia Assembly and changes to EPA pollution standards — coronavirus infections began to rise. And medical sterilization companies like Medline and Sterigenics are citing the pandemic as a reason to ramp up operations.

Though the Willowbrook Sterigenics plant remains closed, the plant in Georgia is up and running. And companies like Sterigenics and Medline are also advocating to either sterilize more equipment or operate without government intervention. In the case of the Georgia plant, the U.S. Food and Drug Administration urged state officials to allow it to reopen, much to the frustration of those concerned about its emissions.

“We got them closed down,” said Janet Rau of Stop Sterigenics in Georgia. “Then they were allowed to reopen under the emergency orders of the pandemic. It’s ridiculous.”

EtO is used to sterilize 50 percent of all medical equipment from plastic tubing to gowns, efficiently killing nearly every germ in sight without hurting the materials. (EtO is also used in industrial manufacturing facilities that make ethylene glycol, a product used in antifreeze and polyester.) Companies blast the gas into chambers where gear sits on palates. Before heading to hospitals, the newly sterilized supplies off-gas. Of course, the plants themselves emit EtO into the atmosphere, and potential leaks are also a concern. In the EPA’s 2018 report, the agency stated that people living in more than 100 locations in the U.S. are at risk from EtO emissions originating at medical supply sterilizing plants.

The closer you live to a facility, the greater the threat of EtO exposure. Last year, researchers looked into the health risks around the Medline facility in Waukegan, a majority-minority enclave identified by the Illinois EPA as an area of concern for environmental justice, a designation that a community is predominantly made up of people of color, significantly impoverished, or both. Blood samples taken from 93 people showed that EtO concentrations were 50 percent higher in those who lived within a half-mile of the plant compared to those who lived farther away, according to the University of Illinois Chicago’s Susan Buchanan, who directs the Great Lakes Center for Children’s Environmental Health and oversaw the study. Though preliminary, she said, her conclusions offer a clear warning: “I think it’s a pretty easy statement to make that industry should not be emitting carcinogen out into our air.”

Some facilities, including the Medline and the Georgia Sterigenics plants, recently installed emissions controls. In the case of Medline, the facility is now allowed to emit 150 pounds of EtO each year compared to the 3,058 pounds released in 2014. Negative pressure systems keep fugitive gases from escaping from the buildings and scrubbers reduce the amount of EtO that billows from the plants’ stacks. (A Sterigenics spokesman says that the Georgia plant is safe and complies with local emissions regulations.)

But community members are skeptical the controls are making a meaningful difference. The Lake County Health Department tested the air around the Waukegan Medline plant this spring. It posted the raw data earlier this month, but an analysis of the findings will take months.* In the case of the Sterigenics plant in Georgia, Rau said that her group still doesn’t know if there are dangerous levels of EtO in the air around the facility.

Even if emissions do decrease thanks to the new control equipment, using EtO to sterilize certain personal protective equipment could introduce a new risk to health care professionals who later wear them. Medline Industries officials now say the company can sterilize N95 masks, which were in short supply early in the pandemic, at the Waukegan plant. In fact, CEO Charlie Mills met with President Trump in March and is pushing for emergency authority from the FDA to disinfect the masks. But the Centers for Disease Control and Prevention and one of the world’s largest N95 mask manufacturers, 3M, advise against using EtO to disinfect them — because of the risk of off-gassing to those wearing the sterilized masks. Many consider treating the masks with hydrogen peroxide a safer alternative.

Doctors and nurses inhaling EtO from recently sterilized protective masks is akin to first responders inhaling toxins in the wake of the attacks on 9/11, said Syed Karim, an ER doctor who testified against the Illinois Medline facility last year. We don’t know the risks associated with using N95 masks treated with EtO. Exposing health care workers, he said, “is extremely premature and irresponsible.”

Meanwhile companies like Sterigenics and Medline are likely to face lawsuits from people who have either already gotten sick or may develop cancer in the future likely as a result of chronic inhalation of EtO. A jury will hear Hochhalter’s case against Sterigenics next spring; it’s one of more than 70 filed against the company’s Willowbrook facility.

Shawn Collins, an environmental lawyer in Naperville, a western suburb of Chicago, represents more than a third of those cases. For the companies, he said, “polluting was the plan, not the mistake.”

Even though government officials say that sterilizing medical equipment with ethylene oxide is necessary — at least while the country grapples with a pandemic now responsible for close to 130,000 deaths in the U.S. alone — community groups say plants should either stop operations or relocate away from residential areas to avoid poisoning the surrounding communities.

“I don’t think all of these agencies are good actors,” Jeanne Hochhalter told Grist. “I think the FDA is either unaware or complicit.”

And there’s reason to be concerned that communities living near these facilities aren’t aware of the risks. As recently as March, the EPA inspector general stated that the agency wasn’t adequately warning people who lived near EtO plants of the health issues posed by exposure to the chemical. Ultimately, said Orris of the University of Illinois Hospital, “from a public health policy point of view, we ought to be moving away from using it for sterilization.”

For organizers like Rau, who appeared to have won a crucial battle against a medical equipment sterilization plant that threatened her community, the fact that the COVID-19 pandemic has suddenly made these facilities viable again is an insult to injury. But as the activists did once before, she’s trying to channel her outrage toward a positive outcome.

“We’re hoping that the silver lining of this cloud of COVID is that the manufacturing industries and hospitals realize that there are better ways of sterilizing materials, rather than using something that’s as toxic as ethylene oxide,” Rau said.

*Correction: This story originally stated that emergency room physician Syed Karim had testified against the Illinois Sterigenics facility last year. He had testified against the Medline facility. Also, the story initially stated that the Lake County Health Department had not yet released findings of its air testing in the community surrounding the Medline plant. It has released monitor readings, as of June 16, 2020, but has not yet released an analysis of its findings.